Let them hate me. Let them complain and moan about perceived injustice. A ruler does not need the people's love so long as they have their fear.
— Empress Maria the Red

Vardania left the third Millennium in the same state that it had entered it. Ravaged by conflict born from familial strife. On the verge of a change in climate and hammered by numerous disasters. Riven internally by tensions old and new. And to the great horror of those versed in history, under the shadow of a Red Empire reborn...


Fresh from her victory in the War of the Furies, Maria Severa returned to the capital of Tarquinnia to hold a proper coronation ceremony. This would serve two purposes: increase her legitimacy and send the message that she was now without a doubt the sole ruler of the Fourth Hegemony. Said event would take on a rather ominous note, however, as the Empress chose to style herself with a title that to both subjects and foreigners alike, promised nothing but an age of terror and iron rule. On the 14th of Ianis 2938 DA, she rose as Maria Imera, Maria the Red.


It did not take long before deeds followed words. A few weeks after her coronation, Maria launched a massive purge of the Fourth Hegemony, her secret police scouring the bureaucracy for anyone still holding loyalties to other powers. What became known as "The Great Purge" lasted for nearly two years and affected all elements of government down to the local administrators. The sense of terror instilled by this act was so great that, according to historians, there was not a single act of rebellion during Maria's 25-year long reign.
Maria was not content with just breaking things down, however. Simultaneously with the Great Purge, she launched a complete overhaul of the Hegemony in nearly all aspects:
Military

The army was rebuild from the ground up based on a modified version of the Severan military. Rather than the slow and cumbersome massed hosts of old, the Hegemony's new military consisted of a series of smaller, yet equally as potent field armies. Chains of command were streamlined, promotion based on merit focused and communication between military branches eased, making the army much more effective if reduced in size.
Economy

On the economic front, Maria decided to use an equally heavy hand. Several key industries, such as production of chemicals and metallurgy were put fully under state control. New coins and a set of price controls were put in place to stabilize trade. Maria's northern allies were settled around Lavran to farm lands abandoned during the civil war. Roads were built, new mines and ports opened and the canal system of the Heartlands restored.
Bureaucracy

"Cleansed" of elements deemed undesirable, the imperial government was streamlined and reduced in overall size. Merit once again became the main element for promotion and a fierce anti-corruption stance sought to keep it from degenerating into a self-serving money sink. Provinces were redrawn, the power of individual governors reduced and a system of constant evaluation established to ensure continued effectiveness.
Maria's style of absolute rule would set a precedent for her successors, which saw the power and influence of both regional and imperial Senates degrade severly. Although the full effect of these measures was only felt by the end of Maria's reign, the reformation saw the Hegemony emerge as a potent force in Vardanian politics. 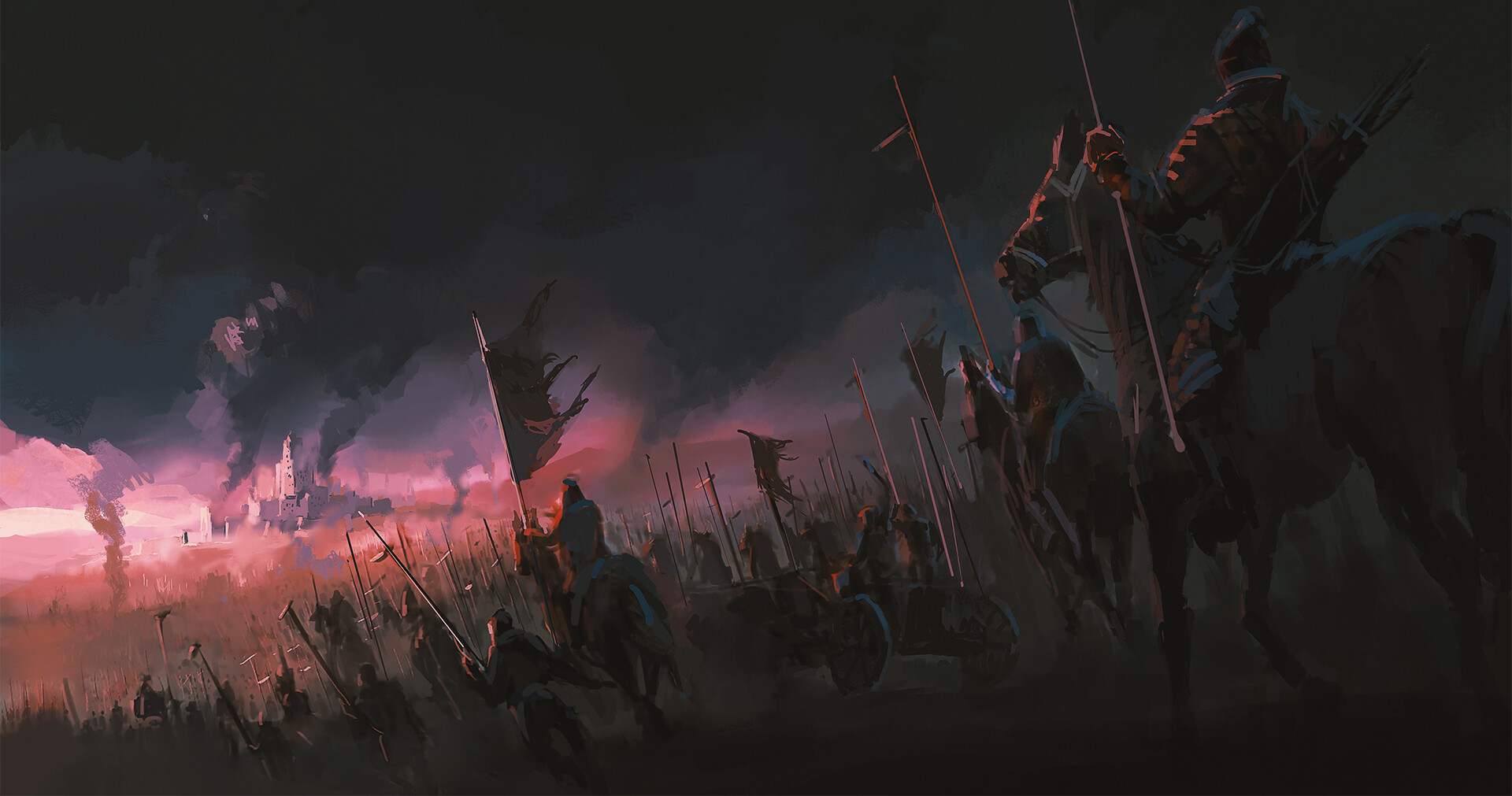 by zishan Liu
Proving that history has a sense of irony, the main adversary facing the young Hegemony was a resurgent Vitrian people under the Tsao'Jie Dynasty. Records attest to at least five large scale wars between the two states under Maria alone, major territorial gains being a rarity and usually undone by the next war.   On other fronts, the Hegemonial armies were more successful, however. By 2947, the southern Heartlands had fallen under imperial dominion and subsequent campaigns into the Reach saw the south-eastern border push past the river Solryn and the cities of Siris and Saena captured. 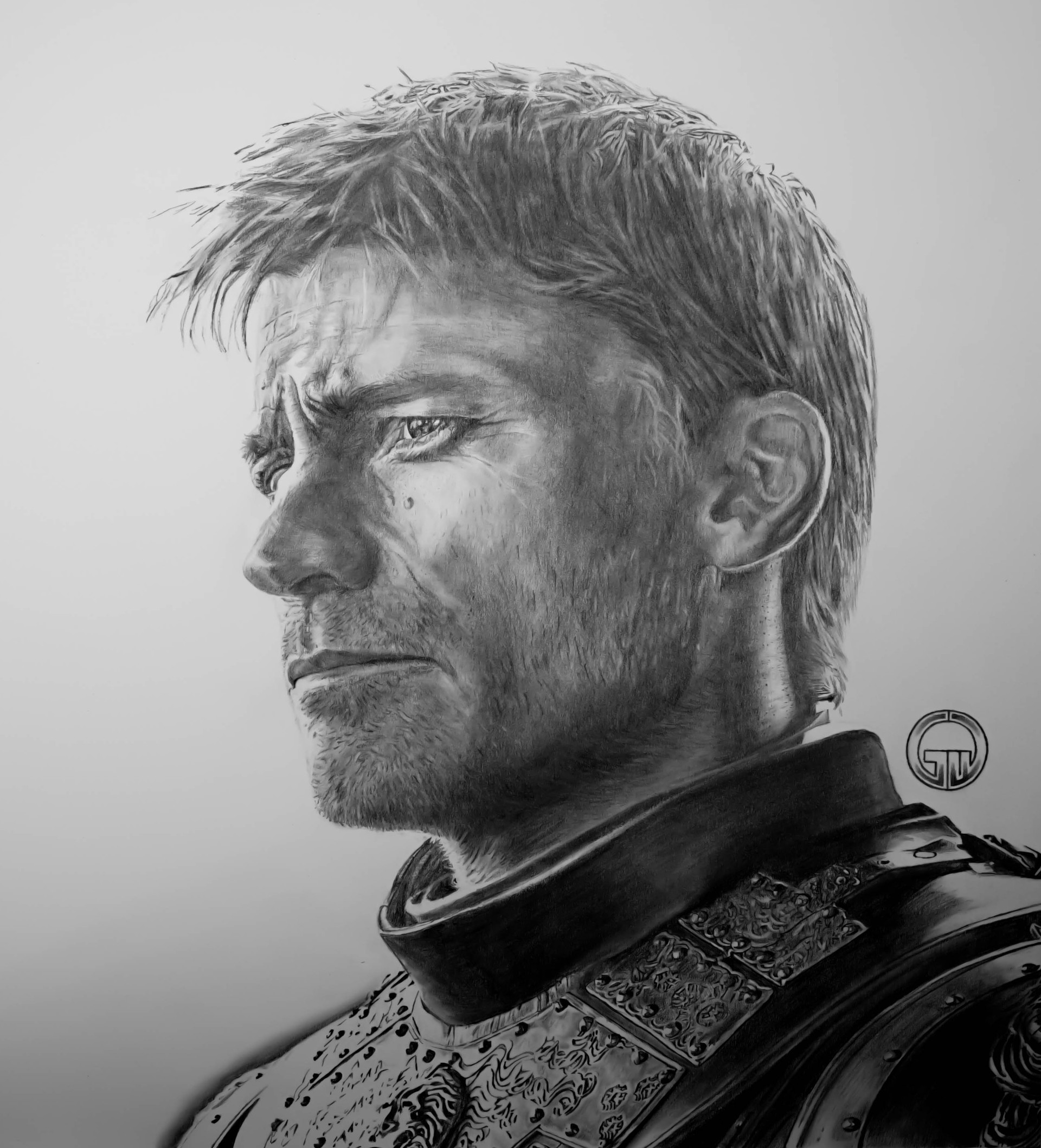 by George Wu
Inheritance proved a more difficult a matter. While she gave birth to a total of seven children, there were only two that survived past the age of ten. Her daughter, Amaelia proved to be unsuited for the strains of imperial power and instead was used to secure the loyalty of the powerful Amares family via marriage.   Her youngest son, Gratian, on the other hand seemed more like his mother and although the youngest, having only been born in 2944 DA, was extensively prepared to take the throne. The stressful life of a ruler soon caught up with Maria and she is said to have died from some form of stress related affliction in 2963. The transition of power seems to have gone smoothly, Gratian being crowned Emperor shortly after.


Here the record does get rather murky, available texts often cobbled together from various sources. People are mentioned that were either not born at the time or had died centuries ago, some appeared in multiple places at the same time, Gratian in particular is assigned fifteen death dates, in short it is a total and utter mess.   Going by the few trustworthy sources it seems safe to say that Gratian was similar to his mother in competence and demeanour. He continued most of her policies although he seems to have tried to make peace with the Vitrians. An apparent failure as he was preparing a major campaign against them when he died of pneumonia.   Having ruled for about 16 years, Gratian probably died in 2979 and left the throne to his oldest son Theodosias. A lesser ruler than both his predecessors, he was largely steered by the interests of the increasingly powerful Field Armies, who free from the tight control of Maria and Gratian freely influenced imperial politics.   Ever since the collapse of the Third Tarquinnian Hegemony and the decline of republican government across the continent, armies had been the main base of support for many rulers, especially Maria whose purges weakened most other forces within the state. Outside her tight control, the military took on a dangerous independence, however.

While this development would reach its devastating peak only about a century later, the reign of Theodosias was marked by the rise of two army commands in particular:
Legias Astara - Sword of the South

Forged out of the remnants of the Mad Fury's forces, the Southern Army was the main tool by which Maria conquered the Feran realms of the Reach. In time, it would also come to include the Hegemony's naval forces on Tyanis Wound. Seeking to draw more funding from the Emperor, which grew in relation to the threat faced, the Southern Army began to increasingly argue for intervention in Interra and Anidara. Theodosias seems to have been especially prone to listen as the from 2983 on, the Hegemony began to rapidly expand its fleet. Something that would have dire consequences.
Legia Venara - Shield of the West

On the other side of the continent, the Western Army was tasked with protecting the realm from Vitrian aggression. It came into being as its own entity around 2969, when Gratian split the theatre from the Northern Army and tasked Theodosias Amares the Elder with building it into a potent force. Amares had filled its upper ranks with his relatives and supporters, effectively turning it into his private army. To protect and expand the vast estates owned by the Amares and their allies in the west, the army lobbied extensively for continued aggression against the Vitrians, was less successful than its southern counterpoint, however.

By 2990 DA, the consequences of this development became clear. On one hand, a large part of the state's finances was used purely to fund the Southern and Western Armies. At the same time, the naval build-up in the south had caused several Anidaran and Interran states to band together to challenge the Hegemony.

by Martin Deschambault
Theodosias would not see the results of his actions, dying in late 2990 of some unspecified disease. A year later, his son and heir Amelian I. would, largely driven by the influence of the Southern Army, launch the disastrous war later known as the Dance on Tyanis Wound.   A conflict that would signal the beginning of the end for the Severans. Amelian's Folly, as many called it later, would consume the short reigns of both Amelian and his two siblings and successors, Luciana II. and Vitellian I. The damage caused by it would haunt the Hegemony for generations and is considered by many to be the definite end point for the Marian Era.


The year 2991 DA marks the end of Vardania's last golden age. All that followed was a torrent of chaos and blood. Oh, how Maria would rage at this sight!
— Alexian Amares, Vardanian Archivar 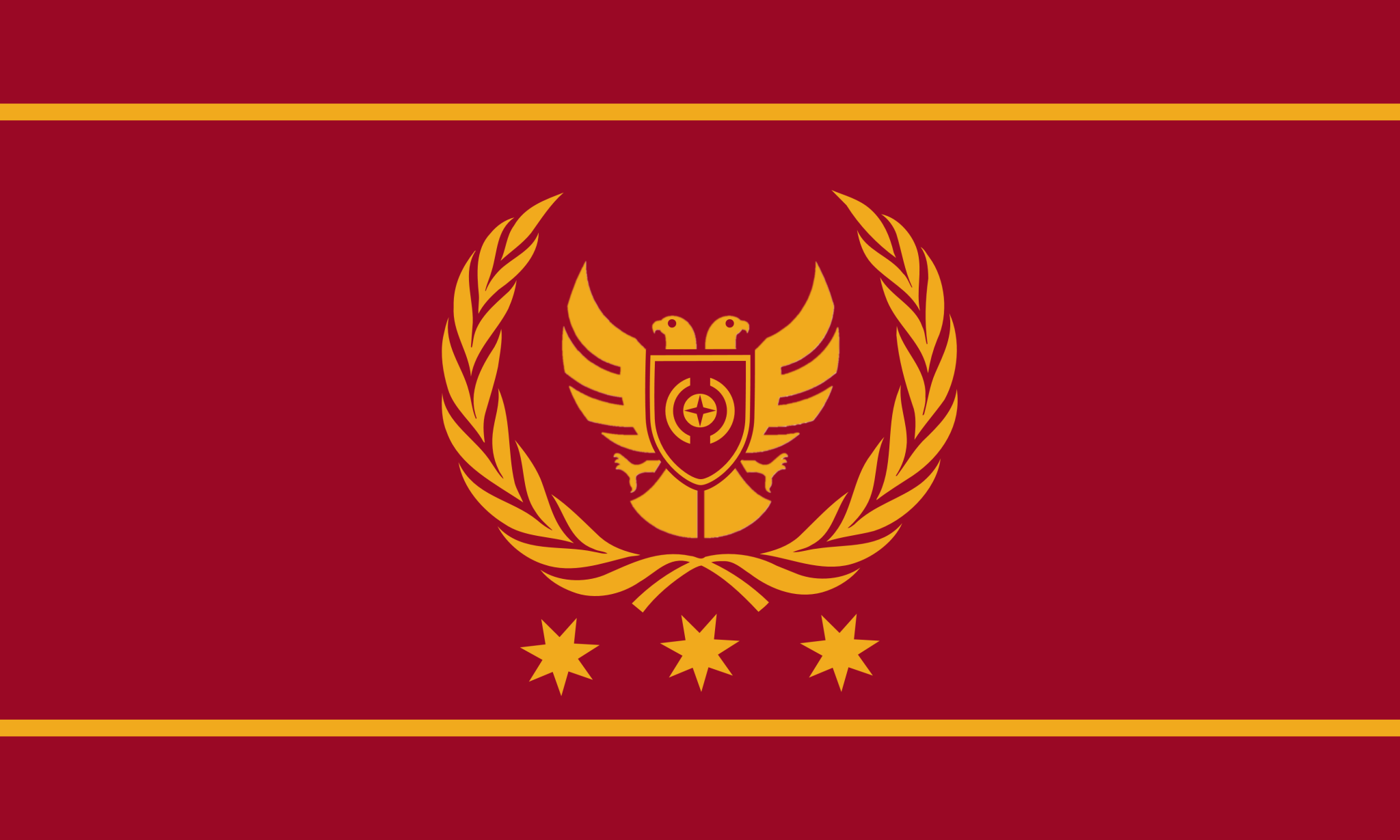 Type
Geopolitical, Empire
Capital
Tarquinnia
Alternative Names
The Red Empire Reborn
Government System
Monarchy, Absolute
Neighboring Nations
No One is Safe
The Great Purge knew no boundaries and even many members of the Severan Dynasty found themselves either killed or exiled. Especially the branch headed by Maria's uncle, Arcadius, became a target due to having the second strongest claim to the throne after the main family. Out of the around thirty members of the "Arcadian Branch" only three survived.

Twenty-odd thousand bodies ought to make a point clear.
— Chancellor Viterian on the Great Purge

Burdens of Rule
Stories of how exactly Maria died are plenty, unsurprising for such an infamous character. Most relate to the strain of ruling an Empire finally catching up to her in some manner. The most popular tells how Maria had grown a tendency for powerful outbursts of anger as the years went on. One day, during a meeting with a particularly obstinate group of ambassadors, she is supposed to have worked herself up into such a towering rage that she suffered a fatal stroke. It sadly does not elaborate on which ambassador exactly caused the fatal outburst.
Return of the Plainriders
The other rising power of the late 3rd Millennium, the Vitrian Tsao'Jie Dynasty proved to be the most dangerous foe of the early Hegemony. While not as powerful as their predecessors, the Tsao'Jie proved perhaps more enduring in their legacy.   Controlling vast swaths of western Vardania at their height, the Dynasty would usher in a an age of prosperity not seen in the region since the height of the Second Hegemony. Forging the increasingly disparate tribes of the west into a unit again, the foundations laid by the Tsao'Jie would enable the Vitrians to survive and thrive in spite of the coming chaos. 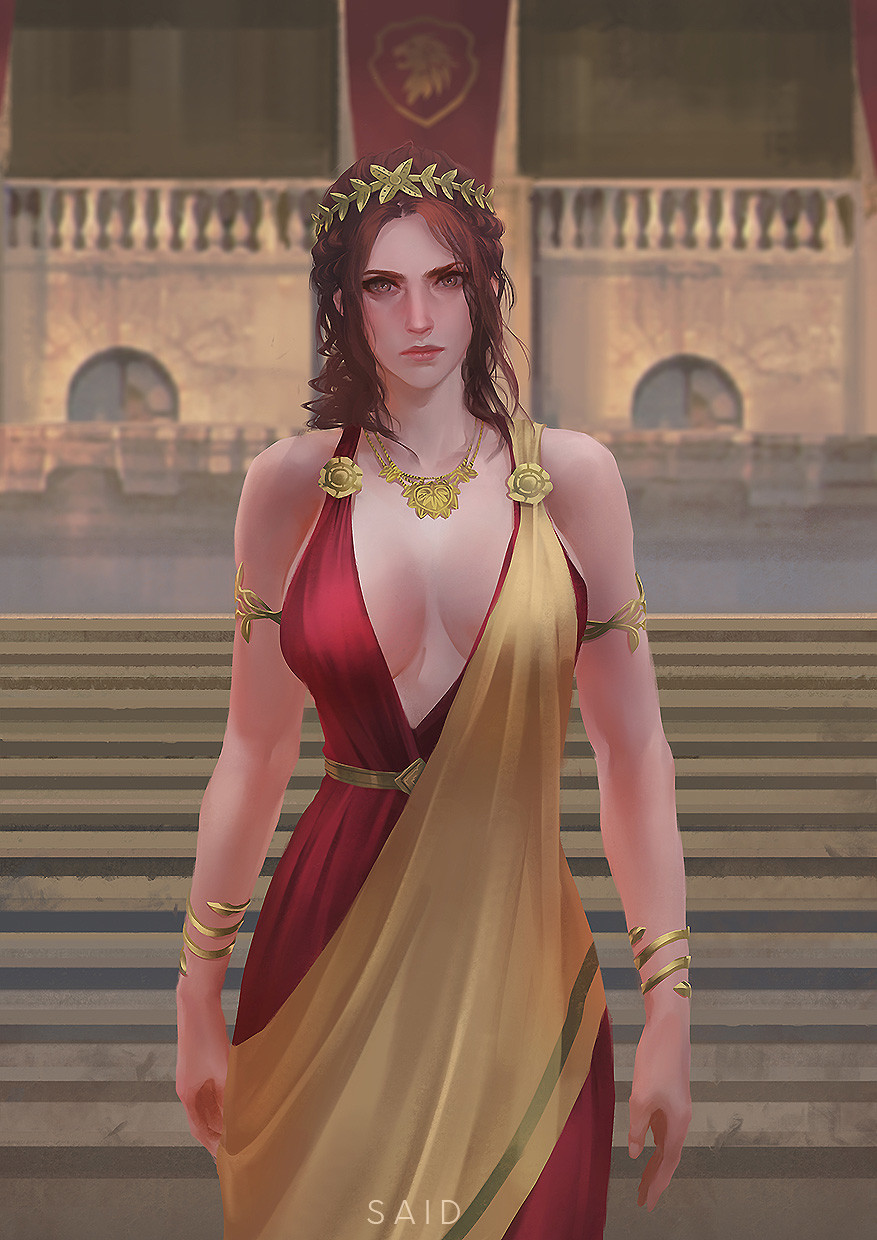 Remove these ads. Join the Worldbuilders Guild
Rise of the Fourth Hegemony - War of the Furies
The Modern World
Dance on Tyanis Wound

Really fascinating article. I particularly like the section about how Maria died, for some reason.