What options do we have? Our army is crippled. They have the initiative, can simply run us over with their cavalry. There are no other options, son. It's fight or die.
— General Phokas Androanes

On a windswept plain in central Vardania, the Fourth Tarquinnian Hegemony took its last breath. Here the proud Legions fell under the hooves of Feran Knights. While not as large as the bloodbath at Andar or as devastating as the massacre at Kaurava, Chaironea marked the end of an era. The old order ceased and chaos rose in its wake.

Last Days of the War

by ILYA TULYAKOV
In the waning days 3329 DA, the Imperial Army was retreating on all fronts. A string of heavy defeats had left them reeling. The Emperor was dead and the Warmaster in a coma. Already governors and armies in remote parts of the continent started to act on their own. And the Ferans were all to happy to exploit that, taking large swaths of southern and eastern Vardania within a few weeks.   During early 3330, General Phokas had gathered his forces near the city of Chaironea, a fact that hadn't escaped the Feran scouts. Anis Moaranon was sent to deal with his threat, marching north in the first weeks of Febris.   By then tensions within the Imperial Army had reached a boiling point. The once-great army had been whittled down by a decade of war, inter regimental rivalries and the ambitions of various generals eroding its foundations. When Warmaster Vargan was declared dead on the 15th of Febris, any semblance of order collapsed. What followed were eight days of bloodshed. The Anarchy at Chaironea saw the imperial army tear itself apart. When the dust settled on the morning of the 23rd the true extent of the damage was revealed. Thousands had died, tens of thousands were wounded or had deserted. Large parts of the camps, including provisions, had been destroyed by fire. And on the morning of the 24th, the Feran army arrived... 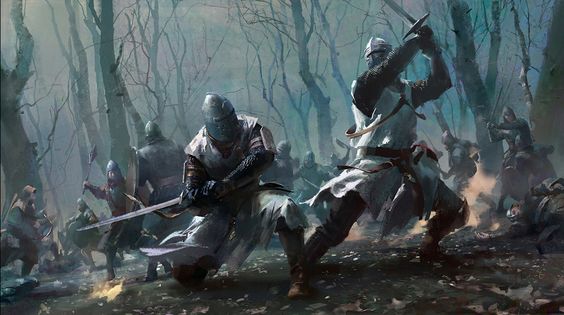 by Lulu Zhang
Barely two days after the Anarchy, order was not fully restored and combined with the two main camps having burned down, this resulted in Imperial troops being spread in a wide arc from a small forest south of the Via Chaironea to the third camp on the intersection. Around one-third of the army under General Tagaen had detached itself somewhat from the main force, camping on an exposed position south of the road.   In the early morning hours of the 24th, these forces suddenly came under assault by Feran soldiers. Moaranon had moved his army into position under cover of night and now his left flank had begun its attack against their unprepared enemies. Tired, hungry and often wounded, the Vardanians were caught out of formation, the only thing saving them being the uneven forest ground which slowed the Feran advance.
Storm of Arrows

The bow formation of the Imperial Army meant that the Ferans could not attack everywhere at once. By the time the main body of the Feran army began to advance, General Phokas had already received news of the attack. When the attackers crossed the Via Chaironea, they found themselves under a hail of arrows. Countering with massed archers of his own, Moaranon began to launch a series of probing strikes and feints, intent on keeping the main Imperial contingent occupied and giving his flanks the advantage in their respective theatres. His plan worked, both sides engaged in a series of brutal skirmishes along the Via Chaironea.
Carnage on the Right

Near the intersection, the Feran Army attempted to roll over the Imperial right with a series of massed cavalry charges. This failed, in part due to the last Imperial Artillery Battery breaking their formation, forcing them to change strategies. Lord Karnen, commander of the right, began a slow methodical advance to test the strength and reach of the enemy artillery. Once confident in knowing that it was unable to support the entirety of the Imperial right, Karnen launched an all-out assault. Additionally, he sent a contingent of troops further to the right, forcing the Imperial Army to mirror this move and stretch their lines.
Fighting continued throughout the day, Feran forces constantly retreating to attack from a different direction, giving the already battered Imperials no time to regroup. Moaranon's strategy of keeping the main Imperial body confined due to the threat of amassed counterattack worked and slowly but surely the flanks began to gave way. Especially the left under Tagean was being battered and a collapse seemed imminent.   This forced Phokas into action, sending several regiments to support Tagean, always on the lookout for a Feran counterattack to materialize. When none materialized after several such actions, Phokas realized that his opponent had bluffed. Seeing a chance to decide the battle, the Imperial Center prepared for a general advance, the plan to overwhelm the rows of hostile skirmishers and catch the Feran flanks off guard. 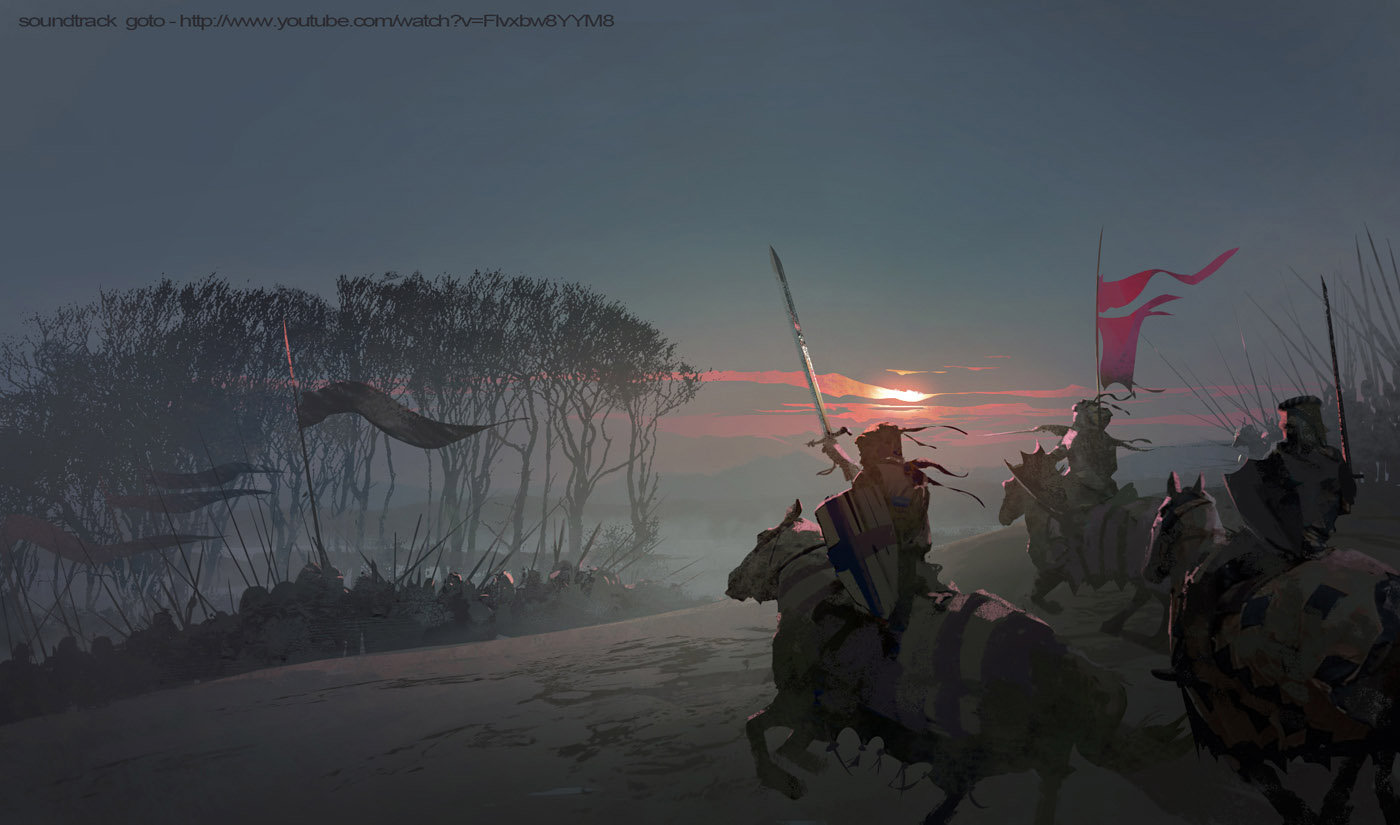 by Christian Bravery
The slowly setting sun would announce the beginning of the end. Twenty-nine-thousand Legionaries advanced on a line nearly three miles long and began to push into the Feran attacks. While their flanks became further engaged in the fighting, the centre continued forward, stretching and thinning the line to a dangerous degree. At that moment, Moaranon played his trump card.   Seven-thousand Feran Knights, the most powerful heavy cavalry in the known world, charged from behind a line of hills and crashed into the overstretched centre like a storm of flesh and steel. The Imperial Center broke apart. And the battle was over.

Most Imperials died that day, including Generals Phokas and Tagean. About a third of the army managed to escape, however. Many of them turned to banditry or became sellswords. One contingent, under General Vikarian, fled north. This force would eventually become the Imperial Remnant under a recovering Warmaster Vargan. The Battle of Chaironea is generally seen as the final act of the Tyrants War. Without the threat of Imperial counterattack, Feranar could pause and consolidate its territories, reforming the alliance of kingdoms, duchies and city-states into a functioning state. Without any central authority and with its last great field army destroyed, the Hegemony effectively ceased to exist, the rest of Vardania would enter what is known as the Warlord Era.

Largest empire in the world and all it took was a woman, a tyrant and a horse to break it. The gods have a fucked sense of humour if you ask me.
— General Vikarian 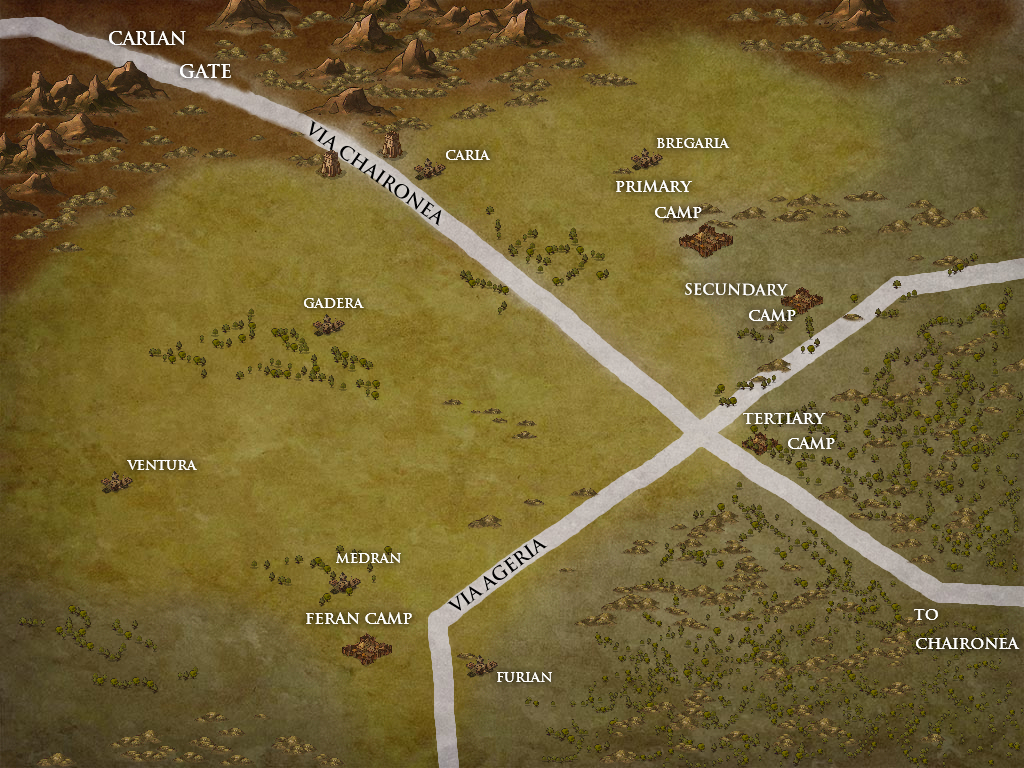 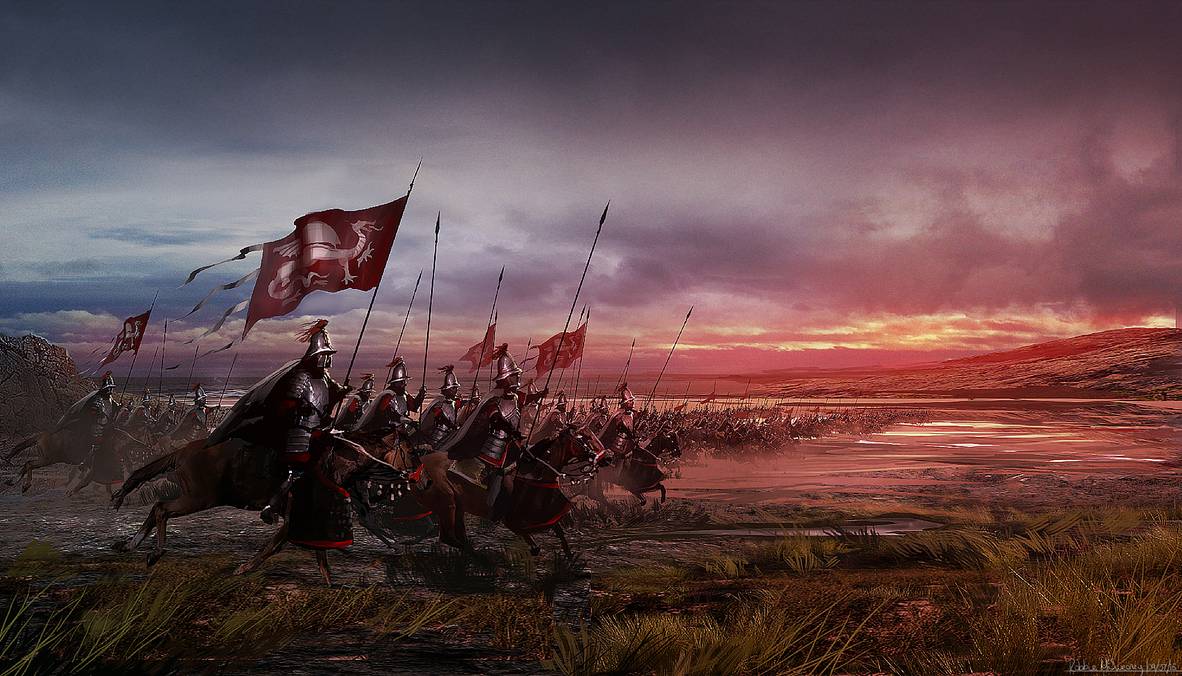 by RobbieMcSweeney
Battlefield Conditions   Toward the Carian Gate, the rough and hilly terrain around Chaironea gives way to a wide, open plain. The battle took place south of the Via Chaironea, framed by the village of Gadera in the west, the Via Agera in the east and a small chain of hills in the south.   A warmer than average Frigian had resulted in my mild weather throughout Ianuaris and Febris. Additionally, the weeks leading up to the 24th had been exceptionally dry. The battle began under a windless, cloud-covered sky.   Lords of War   The Imperial War Council was a collection of businessmen, industrialists, governors and imperial ministers headed by the leading generals of the Hegemony. Originally created to stabilize the Imperial War effort during the turbulent 32nd century, it was re-instated at the beginning of the Tyrant's War.   With Gordian XIII. taking a scarce interest in the war effort, the Council took over and did in essence rule over the Hegemony for the better part of a decade. First headed by Warmaster Vargan and then by General Phokas, it would eventually collapse during the Anarchy at Chaironea. 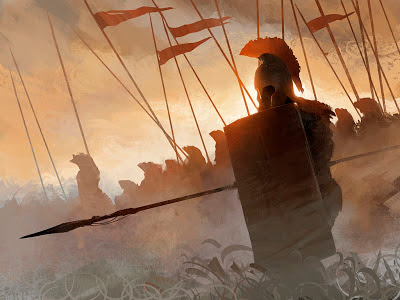 The image of the Imperial Army tearing itself apart even before the Feran army got there gives me chills. Eight days of horror, I'm sure.

Darkseid,   As always a GREAT Article,full of information and the pictures you chose are just AMAZING...Awesome detail and Historical knowledge.   Aemon