"A thundering boom was heard from across the desert. The sound echoed throughout the sky and was quickly followed by an ever increasing screeching noise. Just as the sound was about to burst my eardrums, it suddenly started to fade. And the next moment I could catch my train of thought, it was gone completely. The train... had already come and gone." - Pulshio, Ex Chancellor of New Zeal

The Glass Cannons of Zeal were a remarkable type of locomotive which harnessed the power of dragonglass to transport people and goods at extremely high speeds. Around a dozen or so of these trains traversed Amgine during antiquity and could use a burst of speed to travel up to 10 miles a minute. 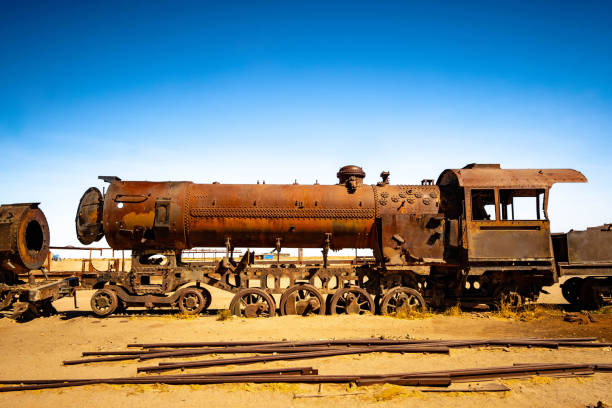 by Pixabay.com
A ruined Glass Cannon

DISCLAIMER: This is not meant to be realistic in any way. The engineering used in this section is completely based around magical resources and natural laws that don't apply to the real world.     The Glass Cannons get their names from two sources, the dragonglass used to power the engine, and the cannon-like speed at which they travel.   At its core, the engine of a glass cannon is designed to utilize a power source called golden steam (created by various dragonglass sources) to propel it great distances in a short amount of time. To learn more about the creation of Golden Steam, please read further into the Intellectual Lighthouse System, a modern-day monument which creates said steam. This Golden Steam then powers pistons made of meldstone, which then proceed to build up energy in the stagnant wheels of the train. After a certain amount of time, the wound up energy is released in one burst and the train is sent flying at speeds around 600 MPH. The excess steam from this journey is funneled out the top of the train, leaving a golden cloud behind.   To withstand extreme speeds, a glass cannon will require a body composed of refined meldstone, a processed form of volcanic rock which withstands high temperatures and is able to divert airflow to the sides of the train. This airflow is further diverted into vents which then lead the air into pipes out the back along with excess golden steam. 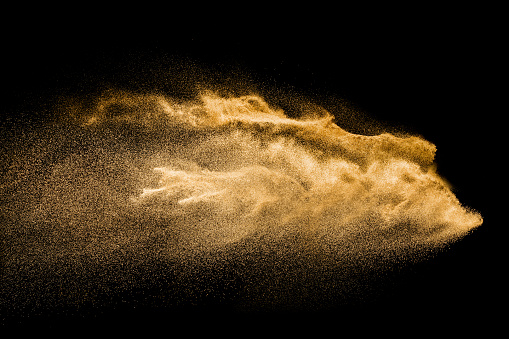 by Pixabay.com
A golden steam trail   When coming to a stop, a train will employ the help of a highly resistant parachute deployed in its rear. As time to stop draws nearer, more parachutes will be deployed and the vents will be closed, causing the airflow to induce drag instead of contributing to the exhaust. The inside of the train is outfitted with plenty of soft surfaces along with seats with extra strength belts for passengers. Due to the high amounts of wear and tear regular high-speed journeys can cause, glass cannons usually stop for about a week to undergo maintenance before setting out on another venture.   It's also worth noting that while Glass Cannons can employ they're powerful bursts at any time, they usually reserve this function for long journeys. When traveling short to mid-distances the Glass Cannon can function as a normal train, utilizing normal steam instead of the golden variant. A good indicator of when a Glass Cannon is about to burst off is when the smoke turns from white to golden.

A job of a glass cannon's crew is the same as any other locomotive: Get to where the train needs to go while making sure the passengers are comfortable. The jobs on the crew are in order from greatest to least power:

The pilot's job is to act as a figurehead for the entire crew of the train, while also playing a role in enacting windup and breaking sequences. They generally oversee the entire train and leave for a vacation in town whenever the train is stopped for repairs. This position is reserved for the most privileged and elite veterans of the glass cannon industry.

The engineers on the cannons ensure that the system involving the vents, engine, golden steam, and exhaust functions properly. This is arguably the most important job on the entire train as it ensures that the train can make its journey.

These crew members play a key, yet underappreciated role in the operation of the train. They not only ensure that the passengers are all tended to, but are also trained in first aid practices, guard cargo, and even know how to play the Enchanted Piano to entertain.

First designed by the legendary inventor Xlchatn during the genesis of the The Zealian Empire, the Glass Cannons went through many iterations throughout their 30 year development period. The idea was first thought up by Xlchatn due to the lack of quick transport across the rose desert, While canals were dug around the continent to allow for sailing vessels to effectively reach the capital of Senturica, there was still a sufficient lack of fast terrestrial travel options. Xlchatn would go on to pioneer the creation and use of golden steam with the so called "Cannon" system. This method of generating golden steam would later be used in many Zealian technologies and the modern-day intellectual lighthouse system (which he designed).   About five years before the triangle conflict, the first train would be put to the test. Affectionately named "Coatl" after the Sun Dragon word for beast, this cannon would travel from the southern docks of Meldwave port to the central city of Senturica. This initial test turned out to be a resounding success, and paved the way for the future acceptance of golden steam technology. After the triangle conflict, the prosperity of Zeal would lead to a large technological revolution, which allowed many more Cannons to be created. By the time of Darkest Zeal, 12 different cannons traversed the continent of Amgine.   After the dissolution of the Zealian Empire, the cannons would be abandoned. While plans to connect some separate regions of Zealor (particularly Tonaltz and some of the northern continents) were drafted, the technology would be lost on the final voyage of the Insomniac. While Xlchatn knew how to create more Cannons, he spent the last of his days training Enigma of the Sun and contemplating his adventurous life.   In modern-day Zealor, the cannons have been lost to the sea. Many degraded during the thousand year storm, while others lay solemnly at the bottom of the archipelago.

Those who traveled back to Amgine after the dissolution told stories about the trains moving across the continent seemingly on their own. These stories entertain the idea that the souls of those lost during the violent dissolution of Zeal forever piloted the abandoned cannons, eternally wallowing in their failure to escape the abandoned expanse. While the details are generally inconsistent, the one common denominator between each account is a disturbing wailing sound emanating ominously from the train.

I saw the glass cannon pun and instantly clicked on it. I love the originality and the amount of thought that clearly went into this. great job, hope you win!!

Thanks for the support!

I really do enjoy the explanation of the glass cannon, combined with the bit of worldbuilding that goes around it. Lots of thought, even if I probably wouldn't trust myself on something that goes so fast in such bursts. I also like the legend accompanying it, gotta love ghost trains!   I presume that the rail network must consist of a lot of straight lines to accommodate the bursts of speeds?

Hi @Master Endrise! If you visit my article on Amgine, it notes that there is a large desert in the center of the continent. While I've only briefly mentioned this, there is a large amount of flat land that can be utilized for construction projects such as this. Ss such there are very few turns and plenty of open space. However, on the mountainous outskirts of the continent there are winding tracks which are used for normal railway transportation. So in short, the cannons generally need to travel to the edge of the desert before bursting.

Aha, a very creative vehicle :) I like it! I would be very worried about the parachutes working properly - I hope the workers aren't under too much pressure to meet certain expectations and are able to properly maintain all of the safety points! The last paragraph is my favourite - Got to love a ghost story :)

(Don't forget to credit the images! You can update the image information through https://www.worldanvil.com/world/apollo/ without touching your article! This is a fun idea and I would very much like to see it get more attention!)

Hey Sailing Ocelot! I used the link you gave me and put the website as pixabay.com for all of them, and credited myself for the ones I created. Is this sufficient or is there anything more I need to do? Thanks for the support!

Hi JatinG! So if you take a look at one of my articles - https://www.worldanvil.com/w/sea-hears-sailingocelot/a/the-seven-concepts-of-magic-law - You can see underneath the images, it says the name of who the image belongs to, and it provides a link to the "artist", even if that's pixabay. Make sure NOT to edit this article, as it will make it not count for the Summercamp. (It takes a while for the badges to come by, etc!) Instead, go back to https://www.worldanvil.com/world/apollo/ , search the images you use, then write down the name pixabay underneath 'Artist'. If you have already put the link to pixabay on the image, then if you refresh this page, it should automatically create a caption for you, with a ready to go link to pixabay underneath. I hope that makes sense! If you're not already connected on Discord, the official WA Discord is a really good source of info and folks there are always happy to ask questions if you need it -https://discord.gg/uqHPraHm All the best! Let me know if there is anything else I can help with!

Hey! I put the captions under all of my images and gave credit where it was do. However, clicking the link takes it to my homepage? Is this normal? Thanks!

Hi JatinG, I am *so* sorry for the late response! You need to make sure the URL link starts with https:// So instead of pixabay.com or www.pixabay.com , you need https://www.pixabay.com