Survivors of the Lunar Apocalypse

When the moon shattered the rabbitfolk were thought extinct alongside the moon elves, cricket-folk, and the hound-folk. As the Far War progressed and the mortal forces reached the moon, they were surprised to discover that the rabbit people had survived and were thriving and fighting from their home on the Lapin Shard.

When I was a wee orcling my favorite stories were about the moon rabbits! I especially loved the one about how a squad of point-ears were getting wiped out by aberrations and got saved by some Lapins flying in on moon balloons! Heroic rabbits and eves getting their butts kicked, my favorite!

The rabbitfolk were one of a handful of native sophonts found on Thaya's Moon, (now the Shattered Moon). When the moon was shattered on the opening night of the War Against the Far Realm all life on the moon was considered lost. However, as the Shattered Moon Coalition arrived on the moon and began to set up military bases, they were met by rabbitfolk of the Lapin tribe who had survived the apocalypse through chance or some last miracle from the goddess Thaya.

They were instrumental in helping the mortal races of Erathia win the Far War and eject most of the Far Realm invaders from the known world. Since then, the last tribe of rabbitfolk has worked hard to intentionally explore and re-settle the shards of their new world.

The rabbitfolk of the moon are bipedal sentient rabbits who range in height from 3 feet tall to a maximum 5 feet 6 inches tall. Their fur comes in the full range of colors common to actual rabbits: sable, black, brown, gray, and white. They have keen sight and hearing and are omnivores with a mostly vegetarian diet. They are prodigious leapers who are able to jump up to twice their height.

They have a strong connection to the natural world and the Feywild making them excellent druids and rangers. They prefer to make their homes in burrows and dens which they keep meticulously clean and well-furnished.

A Leap of Faith

Before the Shattering, there were 12 known tribes of rabbitfolk on the moon. Only the Lapin tribe survived intact. Members of other tribes present at the Great Warren also survived, but every other rabbit died with the rest of the moon's inhabitants. Since the end of the Far War they have made a point of digging burrows and settling all the shards they can find. They have also made sure to set up enclaves on Erathia itself and any other worlds they know of to prevent their extinction.

The rabbitfolk were originally content to live the quiet lives of farmers on the resource-poor and sparsely populated moon. Now the moon is split into the harsh Surface and life-giving Shards. Their lives are anything but quiet now. Many of them remain farmers, tilling the soil of the floating islands, but they do so under constant threat from aberrations and undead that hide on the surface and cling to the bottoms of the shards.

A warrior class of rabbitfolk has developed to protect the rest of their kind. Inventors and wizards train to create weapons and devices to travel amongst the shards. Adventurers and explorers travel the shards, mapping the many unknown sky islands and marking opportunities and threats on their maps. Merchants on Moon Balloons maintain the wider rabbitfolk culture and community amongst the far-flung shards. 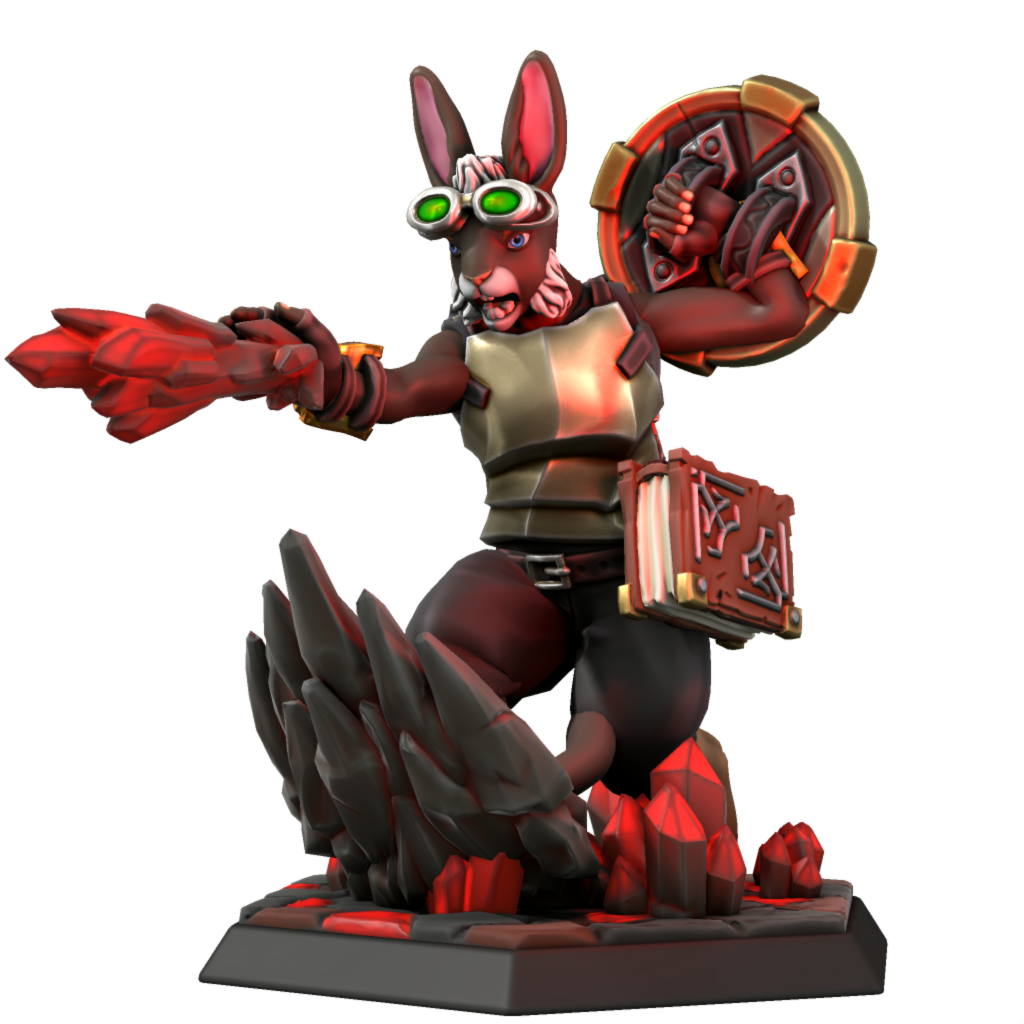 Hoph Telperion, Rabbitfolk Gravity Wizard by Chris L - HeroForge
Hoph Telperion studied gravity magic to understand why the Shards of Thaya float above the moon. He uses his mastery of gravity to help his people thrive amongst the floating islands of the Shattered Moon.

Through some miracle the Lapin rabbitfolk survived the shattering of Thaya's Moon and continue to thrive as the moon's only native sophonts.

The floating island home of the Lapin rabbitfolk on the moon. It was the first known Shard of Thaya and it's magic keeps the rest of the life-giving Shards in the sky.

Answering: "A recently discovered, or rediscovered, species."
Visit kitoypoy's Competition Page Check all other answers to this prompt Competition Homepage