Mr. Pamplona owns and operates Lola's Comfy Kitchen and is the grandson of Lola Carly herself. As a young gnome, he traveled the world, and various neighboring dimensions, with Chef Chiffonade. As she learned the cuisines of the lands they visited, Pamplona (Chidi to only his closest friends) learned their cultures and languages.

Upon their return to the Kirinal Concordance Zone, his grandmother helped him start a restaurant and hotel on the shores of the Gold Arrow River in sight of her offices on the Station.

Mr. Pamplona loves his job and interacting with his customers and guests. He takes great pride in greeting everyone he meets in their native language and according to their own customs. If he meets someone from a land or world he hasn't encountered, he sets aside time to talk to them about their homeland. He has an encyclopedic memory for names and faces, greeting returning guests warmly and inquiring about their families.

He always respects ettiquette and decorum, calling everyone by their proper names and titles. In return, he insists that everyone do the same for him. He is Mr. Pamplona to most, Chidi to his closest friends and family, and Placido to Chiffonade. 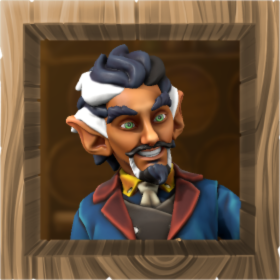