I, Isaac Thompson, pledge to do as much worldbuilding in July as I'm capable of doing!

This coming year will be my 5th time participating in Summer Camp, and what a triumph that is! In each previous year I have managed to complete all prompts available online, though this has become more difficult as my settings becomes more realised and have less 'room'. As such, and to hopefully avoid burnout this year, I am not going to explicitly aim for Gold or Diamond. Gold would certainly be nice, but I won't force myself towards it.

My primary goal will be to continue developing The Last Line, a newer setting based around a number of immovable cities in a world slowly falling over the edge of giant waterfall. However, by the nature of the setting, not all prompts will be applicable (how do you write about a desert in a world that, as far as most are concerned, is water?). When this happens, if the prompt still interests me, I will try to use it in Tiyu Amara instead.   Since the Last Line is fairly new and fresh, content-wise, I won't be restricting myself to any singular area or city in the setting. However, I will hopefully be able to tie a number of the prompts together to help flesh out at least one of the region's important cities.

Since The Last Line is a setting all about cities in a vast ocean, there is an obvious expanse already waiting to be written about! Even aside from the obvious watery answer, there are places like the mysterious space beyond the World's Edge, and the landmasses slowly falling into it. It will be a very fertile theme for the setting, and most of its prompts should be applicable with little trouble.

Each city has its own leaders and style of leadership, as well as its own bustling community, so there should be ample room for this theme within the setting as well! I also have not yet worked on the setting's pantheons or religious elements, which some of the prompts might inspire. This could also serve as a chance to talk about new 'projects' in the setting, such as the construction of new cities.

While large-scale exploration of the vast ocean isn't a focus of the setting, there are probably still things to discover that will suit prompts for this theme. This includes mysteries about when and how the first cities were built, why one of them fell, and why the world has an edge in the first place. There might even be secret places hidden all around!

This theme is a bit less obvious for my settings since I don't tend to write much about evil and monsters, and might be one that sees me dip into other settings as a supplement. There is still room for it in TLL, of course - perhaps creatures lurking in the depths of the ocean, or malicious entities beyond the waterfall seeking the world's demise!

Music
I don't tend to make themed playlists or listen to instrumental tracks, which can make finding thematically appropriate music somewhat difficult. To that end, I'm just picking some songs I like and can see myself listening to a lot over July! Breezy, light, and can be sort of wrangled into being about the comfort that the Laslin cities bring (I just like it) The Transistor soundtrack is an old favourite for when I need to focus. The Spine probably refers to the World's Edge, or perhaps the Laslin cities What kind of nautical setting would this be if I didn't listen to this song every once and a while? A different vibe, but I think might be good for when I'm writing about those in the setting who want to change the world, whether through heroics, leadership, or style.

By Ned Rogers
Bit too high-tech to be a Laslin city, but the general vibe of something on the frontier, far from everything and dangling over a void, fits perfectly 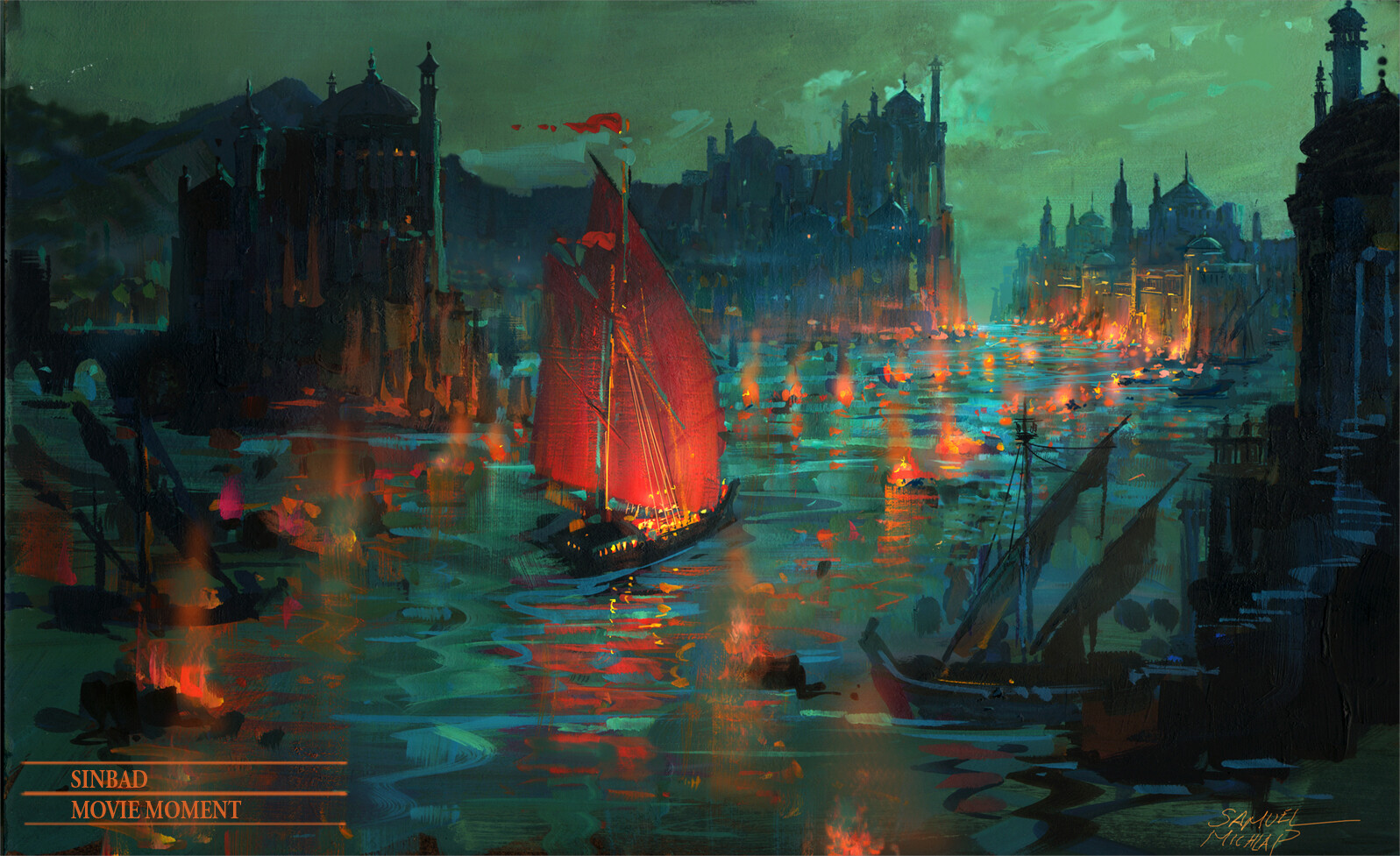 By Samuel Michlap
Lots of the concept art for Sinbad works decently for The Last Line, but I'm especially a fan of this one in its colours and clutter, feeling almost as though the port had to be wrangled from the surrounding sea

Media
On some level, I assume the premise of The Last Line was inspired by this scene in Sinbad. Certainly the World's Edge is just as dangerous, and with no landmark floating past its end.

Our memory is a more perfect world than the universe: it gives back life to those who no longer exist.
Guy de Maupassant

What would an ocean be without a monster lurking in the dark? It would be like sleep without dreams.
Werner Herzog

I can only note that the past is beautiful because one never realises an emotion at the time. It expands later, and thus we don't have complete emotions about the present, only about the past.
Virginia Woolf

I plan to work on prompts live on my Twitch Channel at least twice a week, on my Saturday and Sunday streams. I also stream biweekly on Wednesdays, and so will also work on them then. Outside of these times, I will aim to work on prompts on a few other evenings, such as Thursdays, and a few afternoons, such as Tuesday and the alternating Wednesday.   My community of choice will primarily be the Twitch communities developed by the Anvilite Streamer Corps and the Game of Tomes, as well as dipping into the WorldAnvil Discord channel when I'm around!
Event Articles