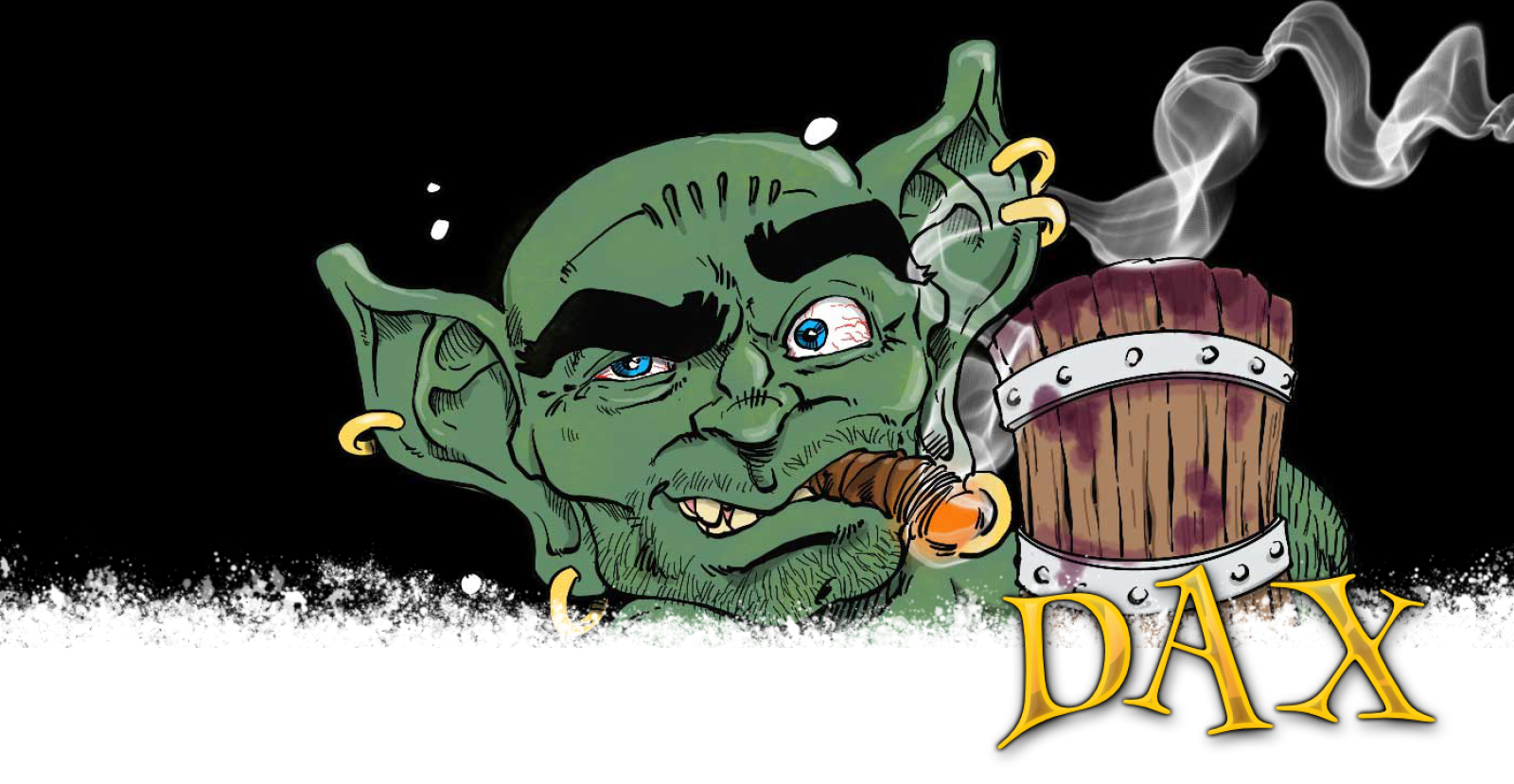 Wanted Hero    People to Remember    The Hero & Friends      Dax
Cast out as an infant.   Unwanted by his family.   Destined to be the downfall of his own people.

Could you keep your head up and be strong when those around you rejected your existence?   Few could.
Born as Daxänu [dax-AHN-oo], which means ‘unsolvable problem’, the child no idea of the incredible life he would lead or how his actions over time would significantly influence the world around him.   Carried by a giant eagle across the Tilliman Highlands and deep into the Andle Forest, the bird landed at the remote cottage of Chuck (a.k.a. Morphiophelius Smith).   Snatching the note from the basket, Chuck scoffed, offended by the name imprinted upon the paper. The mägo knew what it felt like to be misunderstood by those around him. Of the pain one feels from being scorned, mocked, spat upon and rejected.   …and there was no way he would allow such pain to fall upon a child unchallenged.   Daxänu was renamed Dax (solution).

Adopted by a Loving Psychopath

Dax had a fierce protector in Chuck, who raised him as his own. As Dax grew, the mägo taught him to be rough, tough, and emotionally independent.

Dax proved to be a child without fear, intense, blunt, bold, and with a curiosity near impossible to contain. That, coupled with his extraordinary resistance to pain, injury and a heightened healing capability unlike anything the mägo had seen before, danger became the child’s constant companion.   Can you milk a grizzly bear? Dax wanted to know.   Did fish taste better once it rot in the sun for a week, mixed with ripe bananas? Dax ingested it.   Would it taste even better being left outside until it grew fur? Dax ingested it again.   Could you actually snowboard on top of an avalanche and survive? Apparently you can, IF you’re quick enough.

Exposure to Other Cultures

When the teen became more than the old wizard could manage, Chuck moved The Cottage to the one society known to embrace other cultures: the famed city of Erimuri (otherwise known as Sanctuary).   Dax was introduced to the Iskari High Council who greeted him with open fascination. It was quite the event—the Iskari people being a blue-skinned race, welcoming Dax, who had a deep green sheen to his own.   Yet wherever he traveled throughout Erimuri, Dax was welcomed with open arms.

As he grew older, Dax displayed signs of a latent talent for the arcane and an ability to understand and recall certain magic difficult for even the most seasoned of mägo. This prompted Chuck to school him in the fundamentals of magic, symbolism and understanding the balance of the world around him. This training helped him form stronger (and expanded) control over his teleporting abilities, eventually breaking free from the binds of his environment.   With his newfound abilities and earned trust, Dax was officially employed by the Iskari High Council as a formal steward and messenger of the people.   It was an honor he would cherish for more than 200 years. 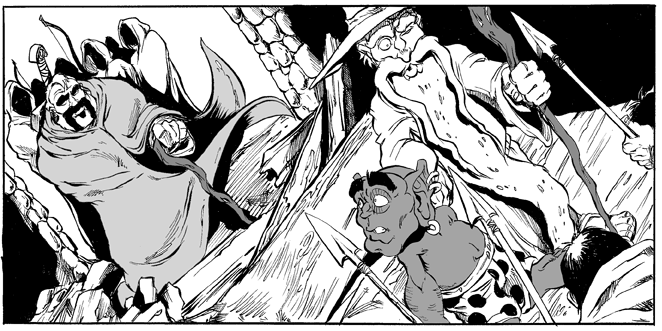 During this time, Dax traveled with Chuck on various adventures (see Jaime Buckley's "Adventures of Chuck & Dax" series), only returning to perform his duties as a messenger from time to time. Traveling with the famous mägo not only gained him a considerable reputation among the races, but it also strengthened his already considerable skills in combat.

Rumors whispered through the years of Dax enlisting as a mercenary. Others say he traveled the world, seeking reputation or more accurately, solitude.

Chuck has confirmed a combination of both.

“What does a parent do when their child comes to you, hurt and confused, asking, ‘Do I matter?’
“Mahan’s Pink Panties, how do you ANSWER a question like that?
“It’s then that you have to look at yourself and wonder if you’ve loved enough, accepted enough and instilled the principle of intrinsic value in the heart of your child…”
— Morphiophelius Smith

In the end, Dax turned his heart to those who had accepted him. Taking up residence once more among the Iskari (at the suggestion of Chuck), Dax offered his services as a messenger, a position he'd often missed. Accepting dangerous assignments from the Iskari High Council, he labored in return for his citizenship among the blue-skinned populace.   No longer bound by the powers of the Prime Gate's , Dax could travel at will…and did so frequently.

For more than a hundred years of dedication and unwavering loyalty in the face of certain peril The High Elder bestowed the title of Guardian upon Dax—to be the protector of Wendell P. Dipmier for the duration of the human’s stay upon their world. 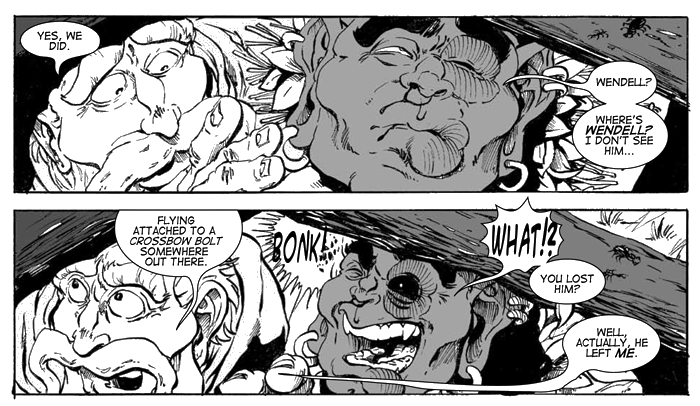 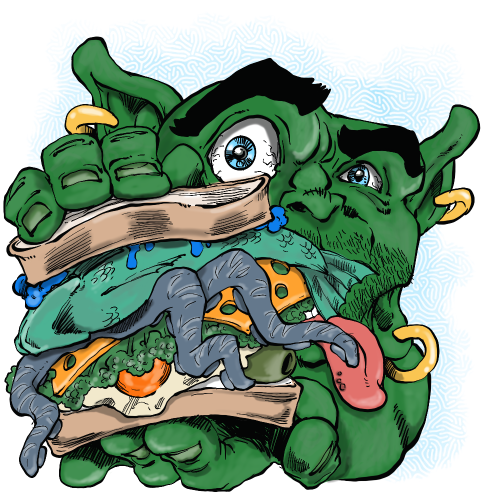 Other than the obvious height, skin tone, and odd body structure, Dax has an extremely dense bone and muscle structure, allowing him to resist extreme temperature changes and to ignore most weather conditions. His long arms also allow him to propel himself at great speeds (much like an ape).   Another unique feature is Dax's mode of dress. Ever since he was an infant, he took to wearing a new pair of Chucks boxer shorts. From striped to polkadots Dax wears boxer shorts as normal attire and rarely anything else. It should be noted that he has small pockets sown into the elastic band, where he stocks his cigars and matches.   Dax also wears five golden loops in his ears. Three in his right ear, two in the right. These are of pure gold, and have, at times, been used as a deposit for a rather long night of drinking...

Dax is fluent in Iskari, Human, Vallen, Therrin and his native Evolu toungue. He has a passion for magic and has studied both Script and Runelore under the encouraging eye of Chuck, Wendell's guide, magical tutor, and comical sidekick.
Parents
Lady Alaria
Mahan
Parents (Adopting)
Chuck
Children

"Dax is one of our least understood citizens. At first glance, he appears rough, uncouth, bitter, perhaps even cruel...but his true nature is quite the opposite. He is thoughtful, kind and any Iskari child will tell you our messenger is a person worthy of trust and admiration."
— Delnar, The High Elder

"A greater fighter I have never known. Except maybe me."
— Alhannah Luckyfeller YOU CAN BE A HERO!! When you purchase from our site, we take the portion normally snatched by Amazon and other platforms, and send books to:
• Teens confined to cancer units in hospital
• Teens held in state correctional facilities
Please join us in lifting the spirits of kids experiencing life's challenging situations.   You are MORE than you THINK you are!
The Hero & Friends

All artwork and content is ©2005 - 2021 Jaime Buckley. All Rights Reserved.
This site is a work of fiction. Names, characters, places, brands, media, and incidents are either the product
of the author’s imagination or are used fictitiously.
We do not take submissions of ANY kind.   Proudly powered by World Anvil.
Article template
Character
World
Wanted Hero
Category
The Hero & Friends in People to Remember
Author
WantedHero
Publication Date
8 Nov, 2019
Creation Date
1 May, 2019
Last Update Date
22 Oct, 2021
Visibility
Public
Views
4346
Favorites
18
Comments
1
Work In Progress
Tags
dax evolu hero wendell bodyguard chuck

Awww, I love his story and that Chuck took him in and raised him as his own. He definitely is a study in the fact you shouldn't judge others by their appearance.   Also... *can* you milk a grizzly bear? :D

It's a true story that back in 2006 I received a tender email from a youth in another country--he thanked me for the stories I was telling and the comic books, then asked me something that both broke my heart and put a fire in my belly that has never been quenched.   "Mr. Buckley, do I matter?"   Even now I get a lump in my throat, wondering what kind of life a young boy has to live to ask a complete stranger that most important question.   ...or what he experienced that he felt he HAD to ask it of a stranger!   That was what prompted the adventures of Chuck and Dax, and why that sad and lonely mägo took in a rejected baby--and made sure he was loved, supported and was taught that he had INTRINSIC VALUE.   ....and yes, you CAN milk a grizzly bear. You do it gently and only while the creature is in the deepest stages of hibernation!