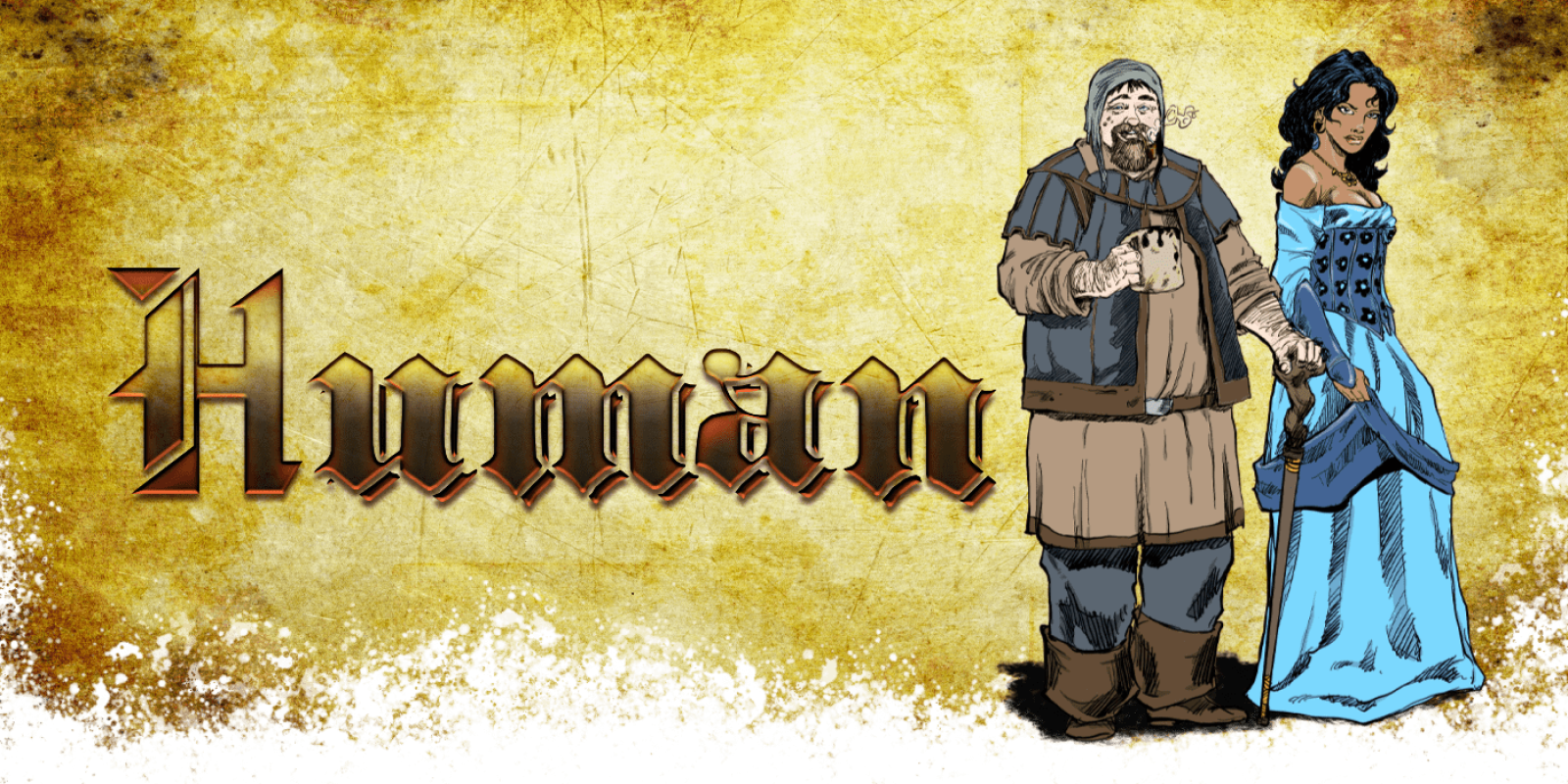 Wanted Hero    Races & Cultures    Human      Human
Though Humär was said to be the soft spoken sons of Arodrin, his seed would rival that of his brother’s clans in both number and achievement. Humans have defied the odds, challenged the darkness and waged war against encroaching enemies while cultivating all that mortality has to offer. No other race produces a wider range of personalities, perspectives or problems than humans.

Humans are the indigenous race, claiming the great continent of Humär, named after their shared ancestor, in its entirety. Strong and adventurous, humans are known as curious people that often seek after things they ought to leave well enough alone. Humans have a strong sense of self and purpose, especially in larger groups. They strive to improve upon their lives in every aspect and to place life's challenges underfoot.   Though many races tend to look upon humans lightly or with irritation, it is the opinion of this historian that our brothers to the north will once more be a key to the salvation of this world.

Of the twelve sons claimed by Arodrin, the descendents of Humär have physically changed the least throughout the generations. Men still average in height between five foot eight and six foot two, while women average between five foot four and five foot ten. Both genders are physically hardy and can live in virtually any climate, adapting readily too harsh conditions.   In fact, there is not an environment I am personally aware that humans cannot adapt to given enough time. This is not the case with all races.

Once solely under the reign of King Robert III, the people multiplied and established new colonies in the northern, southern, upper, western and lower regions of Humär. Each region grew and developed its own unique customs, skill sets and resources according to the environment they adopted as home. Over time, tension grew between the colonies, each region rebelled, seeking independence from Andilain.   Wanting to avoid a civil war, King Robert III went against the council of his lords and openly encouraged the separation and independence of the colonies. He then called the various leaders, each chosen by their own people, to a private council. It was here, surrounded by the lords and ladies of Andilain, that King Robert III proposed an alliance between the human kingdoms. He proposed a new government, pulling as a collective thereafter to be known as the Seven Kings of Men (known among its members as the ‘Kings Council’). Each to be a sovereign nation, yet standing as a pillar to support and protect the race of men as a whole.   What King Robert did not expect, was the loyalty he would win through this offering of confidence.   King Borislav stood and proposed the Kings Council be directed under the wisdom of King Robert III and called, as their first official vote, to sustain him (King Robert) as the ‘High King of Men’. Each stood in turn, drawing his sword and placing them upon the table as a covenant of allegiance to the High King. Though there have been conflicts between various kings, the vote remains unanimous, acknowledging King Robert III as the steward of mankind.

One remarkable aspect of Human culture is their willingness to accept outsiders into their society. The historian Gailik Ambstrum once described humans as being the glue which held the races of light together. This isn’t far from the truth. Humans tend to generally be more open-minded than other races, willing to take a chance on and explore new relationships.

Humans are travelers and explorers by nature, always seeking to see new places. They are also incredibly industrious—making work a priority over comfort and leisure.   The most popular tradition comes every seventh year, when the Seven Kingdoms gather under the banner of Andilain, to participate in a ritual called The Race of Seven Sons. This celebration continues for upwards of a month when the greatest champions of each kingdom compete for fame, riches, and glory.

"Humans are the world's catalyst, sent by the Universe to infect all good societies with their plague of diversity."
— Lord Pastum of the Kutollum

"The gods chose to give mankind the gift of wonder. In exchange, the human race were required to give up the length of their days."
— Omethiä

Humans are the only race connected to every other through both light and darkness. Because of their adaptability and curiosity, humans sought alliances with other races for a variety of reasons. Their greatest worth being the remarkable resources from the land itself, and the loyalty/strength of its poeple.   The Evolu traded resources for knowledge of healing. The Kutollum were won over through the show of force--humans coming to their aid during the great war against Mahan. The Iskari have ever been invested in the mission of their cousins.

The race of men shall always be called friends of my people. Oh, the gnomes have been accused by humans at every turn, and we must take responsibility for the fear we have caused through ignorance and miscommunication. Yet humans are the heart of this world. When darkness rises, they put aside their fear, their prejudices, and risk all for those of like minds and hearts.   To stand in bold defiance of those who would rob others of freedom and liberty. YOU CAN BE A HERO!! When you purchase from our site, we take the portion normally snatched by Amazon and other platforms, and send books to:
• Teens confined to cancer units in hospital
• Teens held in state correctional facilities
Please join us in lifting the spirits of kids experiencing life's challenging situations.   You are MORE than you THINK you are!
Human

Lovely article!   I hadn't realised what it was, but something felt off about WE. It doesn't feel off now, great to see you back at the keyboard again :D   (also, I really love the scroll and what you've done with it, 10 out of 10)

Thanks so much. Appreciate your feedback,....and yeah, WE has been hard for me to get into--not because of the competition, but because December is THE biggest family month for me and I usually have to take the whole month off from work.   Creating a choose-your-own-ending adventure for WorldEmber this year, so we will see how it turns out in the end....have over a hundred pages ready to upload. =)