Incarna are creatures of pure fire that are native to the sun-scorched region of The Scathe. Far more destructive than the dragons they resemble, a single Incarna can burn even the largest city to the ground in a matter of minutes. Incarnas live in Heat Storms, so they are usually confined to the uninhabited Scathe. However, wind patterns occasionally conspire to launch a heat storm into an inhabited region, bringing Incarnas with them.

Though an Incarna sighting is typically a once-in-a-generation event for most people, these elementals have left an enduring impact on the societies they have touched. To the Dwarves, Incarnas are the avatars of Hogabun, god of the Forge. Because of their hatred of Dragons, the Dwarves of Dohir welcome the presence of an Incarna and hold celebratory feasts in their mountain halls while they wait for the heat storm to pass. They dedicate these feasts to the war goddess Folgava, who they believe creates Incarnas to fight against the dragon god Hogabun. Inversely, Humans, Halflings, and Orcs associate Incarnas with their forge gods and see them as purely evil forces of nature.

Incarna are particularly common in the territory of the Goliaths of Mul because they live between The Scathe and the Dohir Mountains. The mountains trap heat storms in their territory, leading to an increase in Incarna attacks. To survive, the Mul have learned to read the wind patterns in the mountains and build their settlements in windless spots that most Incarnas cannot reach. They also offer sacrifices to their fire goddess Szar, and particularly heroic Goliaths cooperate with Dragons to Incarnas and lead them away from the settlements.

Incarnas consist of a core of dragon souls and elemental fire bound together by a magical field that both gives them shape and sustains the fire when no fuel is present. Though they appear in the vague shape of a dragon, Incarnas lack tangible limbs. Instead, they can contort their bodies and shoot flames over a distance of several hundred feet. Their lack of functional legs or wings means they move at the whim of the winds, making them dangerously unpredictable.

Incarnas are known to form deep in the scathe when the souls of recently-dead dragons become trapped in a fiery gyre.

Incarnas can grow indefinitely if they aren't exposed to prolonged cold temperatures and continue to consume dragon souls. The legends of the Dwarves speak of Incarnas that grew to be miles long.

Incarnas feed on the souls of dragons in order to grow. They are capable of feeding on the souls of other living creatures, though these can only slow their death rather than sustaining them.

Incarnas lack vision, smell, hearing, and the other humanoid senses. Instead, they perceive the world purely in terms of heat. In his Complete Compendium of Creophagous Creatures, Arigim of Ramanthas notes that, as a child, he saw an Incarna seek out a single rabbit from hundreds of feet away. While the veracity of this claim is disputed, an Incarna's heat sense likely extends at least that far. 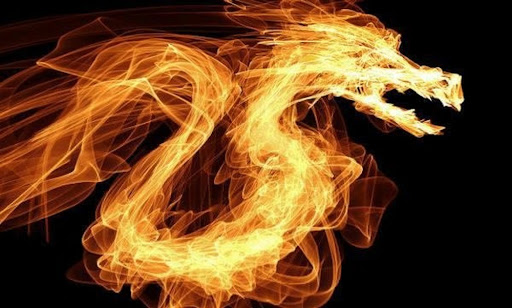 Remove these ads. Join the Worldbuilders Guild
In response to the prompt Describe the most dangerous apex predator in your world.