May the Dark Cloaks never find you
— Common Valencian Blessing 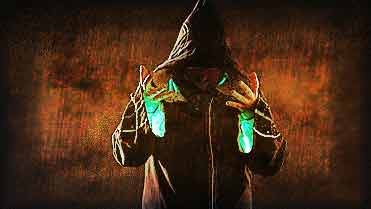 The name Dark Cloaks derives from the dark charcoal gray cloaks the order wears when carrying out their duties. Unknown to common folk, these cloaks are actually reversible garments with the dark material on one side, usually worn on the inside, and a common and brighter material on the other. They colored side is worn outwardly most of the time, the members only reversing the cloak to show their true dark-color immediately before they begin their tasks. Not only does this strike fear into the hearts of the folk of the plow and the forest, but it also allows them to seemingly appear from nowhere and, again, disappear in secrecy with relative impunity. In addition to the Dark Cloaks being one of the few groups with access to magical knowledge of proficiency, they are also adept at enshrouding themselves in a cloak of fear and mystery.
Throughout almost all of Valencia magic is a shunned, feared, and forgotten power.  Those few that do practice the lost and loathed art do so in secret without the aid of materials or mentors.  The Dark Cloaks, however, embrace the magical arts and share their known spells, experiments, and knowledge with each other.  While a secret brotherhood that operates hidden in plain sight, they remain one of the most potent powers in all the realm; bending the knee to none and swearing fealty to only their own brethren.

It is highly unlikely that any spell casting character in the game would ever be given access to any of the knowledge the Dark Cloaks hold.  While it is possible that Player Characters might encounter, interact with, or even become allies with an individual belonging to the Shadows of Light, knowledge of magic is only shared with members and joining the order requires that one put aside all other ties in lieu of serving the order.  For the Player Character, this would mean retiring the character and cutting all ties to their associates.