Awemonth the 9th, Year 50 of the Century of the Nymphs, 26th Cycle

Gemoss, the city of Dwarve, is located in the Underground, next to Darkainger, the city of Dark Elves, with Belacoushe in between them. Or so the signs say. Really, there are just as many Dark Elves living in Gemoss as there are in Darkainger and just as many Dwarves living in Darkainger as there are in Gemoss. The palaces of each of the two races there though, are in the appropriately signed city. Running through the streets of Gemoss, not only will get you lost, but will give you headaches from all the bright colours there.

The Destill is the largest Tavern in the Underground, and is the corner between Gemoss and Belacoushe. It is important to the topic of magic technology as there are fancy security walls / windows. There are Dark Elves as security guards there, so the extra art walls are used as material for them to earth magic into whatever they need without destroying the Tavern itself.
When I first got there, Trixie was running an auction on Spice. Trixie is the Dwarf who runs the Destill and the one who makes a lot of Spice and Fake Spice and sells it to most every other Tavern in the world. She has a new Fake Spice recipe she sold off to a place in North City. Apparently they get the rights to it for a month, then Trixie will sell it to others as well.
There were people whispering about the walls of the distillation columns that have Spice used in them. There isn't anyone who doesn't work for, or with, the Destill that knows about it. One chef said his brother works here, and so had a tour of the Spice factory upstairs when they did a tour for the chefs who work with Spice or Fake Spice. But even they didn't get to see the inner workings of the distillation columns. Could they really be that interesting?
The paint on the walls of the Destill is mostly made of magic moss, and the feature walls somehow have some Elven magic inserted into the extra walls, to make the walls swirl around, so they look like art. You can't stick your hand in it as it isn't water, but stone. And if you try and insert water into it, the Dark Elf security guards come and take you away from it.
They use these walls to stop anyone from climbing into the bedroom windows.  On both floors. Where the Spice factory is on top of the Tavern, is covered in this material. So even if you try to sneak in from the third floor, there is something in the material that lets the Dark Elves inside know, and they come rushing through the walls. I bet it would have looked funny from the ground.
Here is a piece they threw at me. It doesn't taste like Spice.

After I ran away from the Dark Elves, an old man come up to me. He has very wrinkly eyebrows, and smells like a dusty sea. He wanted to take my bracelet with a mini aquarium, saying he doesn't have that one yet. I asked him what he meant and he took me to his house in the back streets between Belacoushe and Gemoss. Dark Elves had built purified black stone tunnels, but the further you went inside of them, the more glow in the dark plants there were. There was even one that attracted Magic Bugs, with another one wrapped around it that ate the magic bugs!
Inside his house were so many little aquariums and terrariums. He started picking some out and telling me about each one.

His whole house was covered with various terraria and aquaria. All the aquaria were closed, but some of he aquaria were open and spread up and across his walls. But they didn't sprawl everywhere. There as a certain doorway that had no plant-life cross it. Apparently it's made of some kind of plastic, that allows electricity to zap across it every so often, just enough that the plants don't stick to it. The small hallway after it is also made of the plastic, with a couple of lights running through it, but no stone or earth for magic moss to crack into. 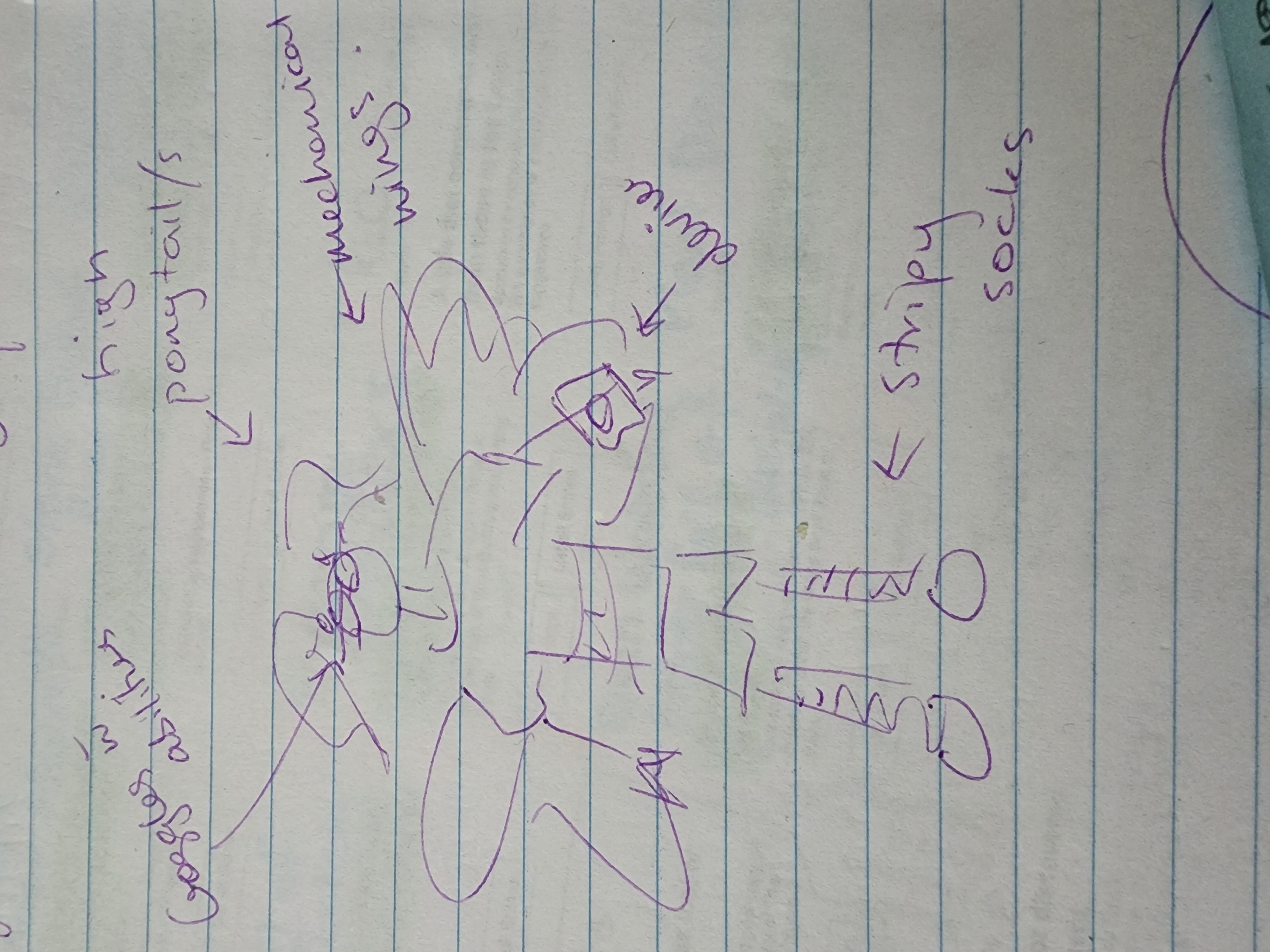 by TaraFaeBelle
The head lady of the magic technology department of the largest technology company was a funny lady. I like her. Her company sits at the heart of Gemoss and is the largest building in the business district.
When we arrived out the front of the company, she was flying over the top of the first building, with manufactured wings (the same colour as my hair), and a light show going on. It was almost like they were welcoming us. They even had food stalls!
I think they must supply the Destill with some of their food equipment due to the crisps tasting the same. I even tested all the flavours, and there was something the same between each of them that are different to the ones made in Human cities. Same with the lemonade. Taegrin didn't let me drink any of the alcohol though.
After going inside, there were a bunch of tours available for anyone to visit. They filled up fast though, so we were split up (Taegrin took the last place of the everything wide tour). And then I toured the food stalls again before going to the magic technology department specialty tour. The Fairy lady was the one that led the tour. She is good at sales. I now have a fairy floss maker that activates from sea shells, a terrarium that is used as a key for a chest with a secret safe inside only opened by my magic, and a blender that works underwater by having its own air bubble that doesn't burst (except for certain conditions written somewhere on the instructions). I almost bought the company a set of the same wings she has.

Most people think that the Underground is pretty boring, but there is actually a lot of fun things there. The food is fun too. I wonder if they could make me fairy floss cookies next time though?

Of course you'll get headaches if you eat the paint of the walls!

But it looked tasty. Plus, I don't have to worry about the effects of magic moss, my Naiad immune system is the best at breaking down the poisons in moss. I'm probably even better than that Hoen character you keep talking about.

Hoen isn't just a character! Hmm, but you are a Nymph, so I guess that part is okay. Still, think a little would ya, there's more than just magic moss in the paint.

Hmmm, still, I did fare better than you.

Why were you trying to take me to weird places anyways? Just stick to the recommended areas and you won't get magic moss poisoning.

But my places were more fun.

The Collector guy? Not fun, that was the worst. But, were the lights really swirling? It wasn't just my moss-induced delusion?

The technology company wasn't welcoming us. We went there specifically because they were putting on a show and tour at that time. That was the main reason we went there! I'm surprised we even managed to make it on time what with your antics.

Eh~ But you made us get there so early. What else was I supposed to do?

What do you mean I took the last place, you basically pushed me into it!

I didn't put the excitement on your face though ~ Nor did I write your 5 fully filled notebooks from the tour.

You did cause me to finish early though!

The tours were finishing up anyways ~

But we missed out on the gift shop! There was candy snacks there too.

What she is good at sales, huh? You just are gullible to things involving food!

The chest wasn't for food though?

You told me that she told you you could save you candy inside so no one else would eat it, though?

Yup. It's a good hiding place. My sister will never find it. Ah hah hah.

And what nearly buying her wings. I came in just in time to reverser your buy! If she didn't have a five second rule refund opportunity, you would have only bought blueprints for wings you can't even make!

I was charging it to the Council.

You don't have the rights to do that!

Not from the Council directly!

Hmm, I see. I'll have to get the right person's name for next time then.

That's not the point!

If you keep adding your notes, I will submit them as part of your report.
Don't just state 'the same colour as your hair', but write the particular pink you have, remember others will read this who have no idea what you look like.
I am glad Taegrin was able to stop you from drinking, besides the fact that you were working, I am told you do not handle alcohol well.  That was not necessary to write in your report, though.
I will resend you the form for work expenses. To be approved as a work expense, you must have paid for the object and then prove that it was necessary for work in the form. Otherwise, it is coming out of your own pocket of expenses, okay?
Again, a statement in the final section of your report needs to have been mentioned beforehand. Who thinks the Underground is boring? Why?

I got the form, but, do I really have to fill it out each time I buy something? That seems like a lot of work (I'm pretty sure I'm not paid for it either).
Also, I was asked back by Miss Technology Fairy to come and try out their new cookie recipes. If I write a report about them, that counts as work, right?

If you don't want to fill out the forms, pay for it yourself, or don't count them as 'work expenses'.
I am surprised they want you back, however, you may go if you take Taegrin. It will only count as 'work' if you submit an academically sound report.
We talked to the Destill, on your behalf, but they decided not to press charges and simply asked us to inform them if you are coming back. If you do go back to the Underground, please, stay away from the Destill. We will send word regardless, though, so don't it stop your report if you need to go there with 'Miss Technology Fairy' (but only if that is the case).
Council Notes
Check out that back street. What have they been doing to create such monstrous plant varieties?
Maybe keep Mimi close by until the Council Housing Open Day. Let us see if she really can become a proper KLO that will follow the rules.

Answering: "A settlement that leads the known world in something"
Visit TaraFaeBelle's Competition Page Check all other answers to this prompt Competition Homepage

The imagesof Mimi, Taegrin and the Supervisor's faces were created using Artbreeder.
Please Login in order to comment!