The humble cart comes in many shapes and sizes. Used by merchants, travelers, farmers and slavers; getting goods from one place to another is no easy prospect.

The most basic model is used locally, perhaps just around the farm or homestead has 2 wheels and is pulled by the driver. More industrial wheelbarrow than mode of transportation.

Larger still is the most common variety. Typically 4 large, spoked wheels, pulled by 1 or 2 horse sized creatures. These carts are sturdy enough to travel from town to town carrying several people or a load of goods. While solid, these carts are not built for speed and are frequently the target of bandits or larger monsters.

For more advanced uses, a cart can be built with heavy duty wheels, a basic suspension system, extra passenger space or a large bed for heavier merchandise. Pulled by 2-4 horses (usually) these carts are built for faster speeds and can handle going offroad for a time better than smaller carts with thinner wheels.

Heavy industrial carts have been used for transporting many troops at a time. Once, at the Battle of Winterhaven, a cart many times the size of any previously seen, delivered a massive Warforged unit named the Lord of the Forged to the front line of the fight.

In addition, while not considered carts these should also be mentioned. Wagons and carriages are in the same family. 4 wheeled and drawn by 1-4 creatures depending on size and speed. These vehicles are built more for comfort and getting people from place to place. The average wagon is covered, has bench seats and can hold luggage on the roof or to the rear. Carriages are in a class of their own. They are designed for maximum traveling comfort and decorated with personal effects, monograms and sometimes full advertisements of the occupants.

One story tells of a carriage seen around Winterhaven that was so flamboyant it was nearly impossible to look away. Painted black and gold on the outside with a large MG on the sides with purple velvet interior. Later viewings say the monogram had been removed.

All in all, the simplest cart is likely to get you and your belongings where you need to go. 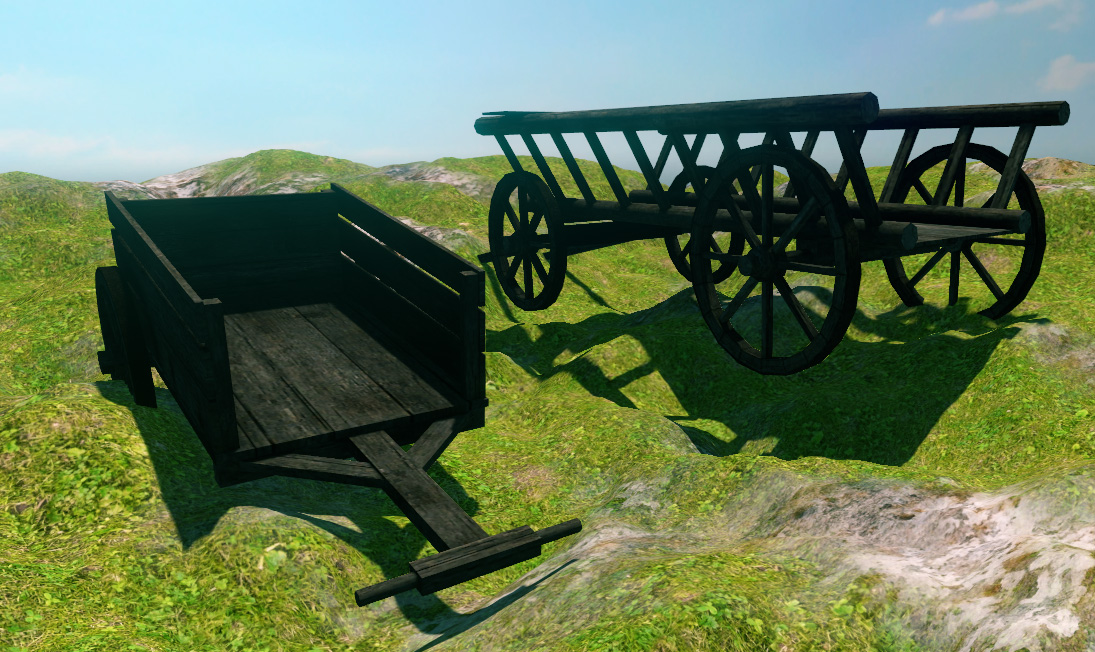 by Steve Tremblay (with FlowScape)
Living in Theria