Although the day-to-day Fate influences are minor and/or beneficial, Denxalue is occasionally wracked with bizarrely hostile weather events that have downgraded its classification to Negotiable. People die when the weather is bad enough in Denxalue, and communities get shattered if Lauvera deems them to have overgrown.

What kind of population and economy does Denxalue have?

Denxalue is something of a horrid swamp. The ground is not good for building on, and a lot of the buildings are small buildings up on poles. Larger buildings are often built up on a layer of imported stone or brick in order to create a foundation that can be constructed on; some of those have subsided despite precautions. These troubles keep the population and economic activity of the theome down.

There is some amount of ironsmelting in Denxalue due to the presence of everlasting bog iron deposits. Surface resources in Denxalue in general tend to replenish very rapidly, permitting everlasting superficial extraction. There is also fishing, herb gathering, and abundant (albeit inferior) wood gathering to be performed in the theome. Yet this gathering-focused society produces an economy as stagnant as the swampwaters, and there is a lot of poverty in Denxalue. Farming works out poorly here as well, since Lauvera considers farms to be "ugly," and it's greviously unfortunate for people on Theoma to be ugly to their land god.

The best attraction in Denxalue are its swift-fermenting fruits that tend to turn alcoholic on the branch. These are served more enthusiastically in bars than on dinner tables. This inspires some amount of travel to route through the swamp to eat the local produce, which doesn't ship well to anywhere else.

There are two "cities" in Denxalue, though they're pretty small for the title. On the southern border with Tekagol, there's Yunven. The land is some of the dryest in Denxalue and the weather some of the gentlest, so Yunven is the larger of the two cities with much of the local governance. Deeper in the swamp, there's the city of Zhaoze, which is all small buildings built up on poles. Zhaoze is a true swamp town with a feeling of isolation about it, though it isn't too far from civilization by flight.

The one word to describe Lauvera is either lazy or filthy, and the second best word is the other one. Lauvera's avatar is a fat mud-bathing nudist Vrash. Superficially, her avatar is quite harmless, and she adores people who love the swamp as she loves it. Yet to most people, she's an ambivalent or even unwanted presence. People who've seen the kind of undescribable weather she produces in her theome - especially if they've lost something to said weather - consider her a killer.

Lauvera regrets her bad reputation, but she's emphatic that she wants her swamp to have a small population of people who love it as a swamp. She doesn't want people to build monuments to her, themselves, or anyone in Denxalue. She wants humble swamp people in small numbers. She rarely grants life-blessings and only to people who match her target stereotype painfully well. 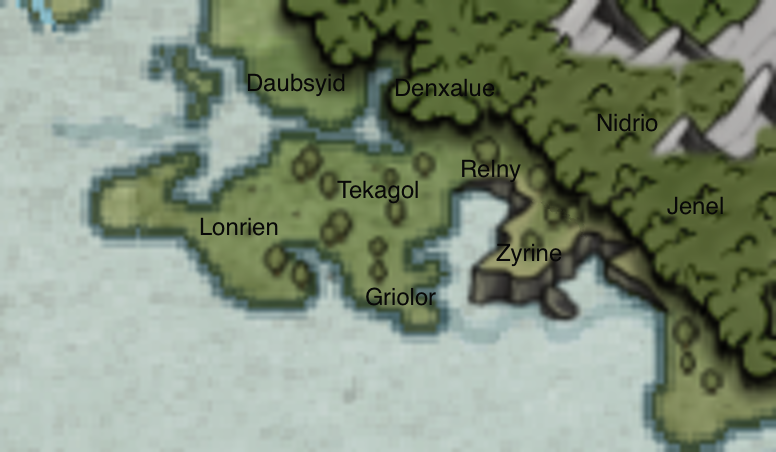