The priests at the temple gave her the name Phinux, because she was found between the fires of a burning village. As Priestess of Obad-Hai and Beory (God and Goddess of Nature) in the Jakul Oasis Temple throughout her childhood, she learned to be a Druid.

Standing 5' 4" tall, this fair tan skinned woman has a innocent posture, but awkward feel about her.

She has short arms, a lean torso with modest breasts, long legs, and average-sized feet.

She has an oval face with a soft chin, a small nose and full lips. Her beautiful eyes are a mix of green & brown and looks like they change. They are complemented by a natural look of brown lashes, natural-coloured blush and peaches lipstick.

Her red & blond hair was magically dyed so it looks like fire from the corner of your eye. A lock of shoulder-length & flowy hair was pint behind her right ear.

In her nature tattoo's covering parts of her arms & legs have a few runes hidden in the art.   Because she doesn't want to stand-out, she usually wears casual clothes that are mostly neutral-coloured and are easy to move around in. She is always seen wearing a necklace with a woodcraft pendant of a live tree hanging from a cotton cord.

As long as she can remember, she lived in the temple of Obad-Hai and Beory, the god and goddess of nature. The caretakers there called her Phoenix because she was rescued from the burned down village of Lugash , however when growing up she always thought that they called her 'Phinux' and when she learned the correct spelling she decided to keep it the way she knew. Her training ended when the Skaven came and destroyed the temple she called home. As she crawled from under the ruins she realized that she was all alone in the desert and had no where to go. She knew that her best hope of finding another civilization was to head north and hope to reach the land of assassins. From there she caught a boat to Los Cabos (in Estalia) and continued her travels (by boat) to Marienburg. Feeling safe again she devoted her life to find knowledge and train her skills in order to help people.

The only family she know were the priests, priestess and others how lived in the temple. As far as she know there are all dead, but not find them all in the ruins. The bodies she find she burned to help the to the after life.

In the temple Phinux was studying to be a priestess, but never could perform the secret ritual to become a official priestess. The rumor was that in the ritual you would see and hear Obad-hai (god for the man) & Beory (goddess for the women) and pledge your loyalty to them. After that you are connected to them and ask directly for there help. But also punish you if you go astray.   After the destruction of the temple Phinux blamed the gods for not helping them. So she stopped praying, but some rituals she couldn't let go. She still like to meditate in nature's beauty and take the energie of the season to her. She thanks nature for providing food and shelter. And the rituals of making remedies she performs as she had learn them even do she learned over time the some parts are not necessary to make the remedy.

Phinux has a natural tendency try to help people and animals in need. But after her travels she is less naive to trust strangers. After a few years of seclusion, to find out what destroyed her temple, was used to keeping to herself.   She can't keep things to herself and find i wrong to tell lies.

Even at a young age she had a natural way to interact with animals. Now she has a pet that she rescued from Barad-dûr an his name is Pigeon the Pigeon

She has a soft sudding voice with an accent form the west of the desert. Even though she had learned the speech with more delicate and more difficult words. She speaks mostly in simple words and sentence so common townsfolk could easily understand her.

After the destruction of the temple, she searched the ruins for survivors. When she realised she was all alone, she took the valuables she could fine and carry. Most simple gold and silver ornaments she sold or traded for a simple meal of transport. The scrolls and some books she find she took with her to study and learn to make a living helping people with basic remedies. Now is she has enough to buy basic needs like rations and a decent night of sleep. 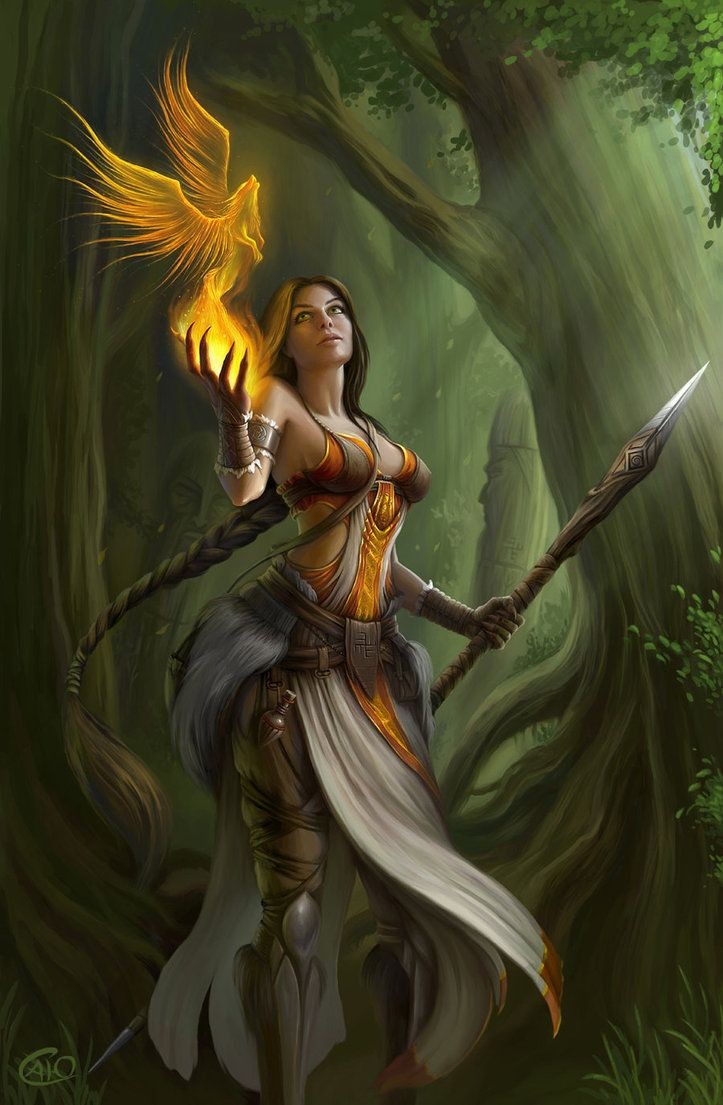 Phinux, Born out of Fire and in search for a better live.