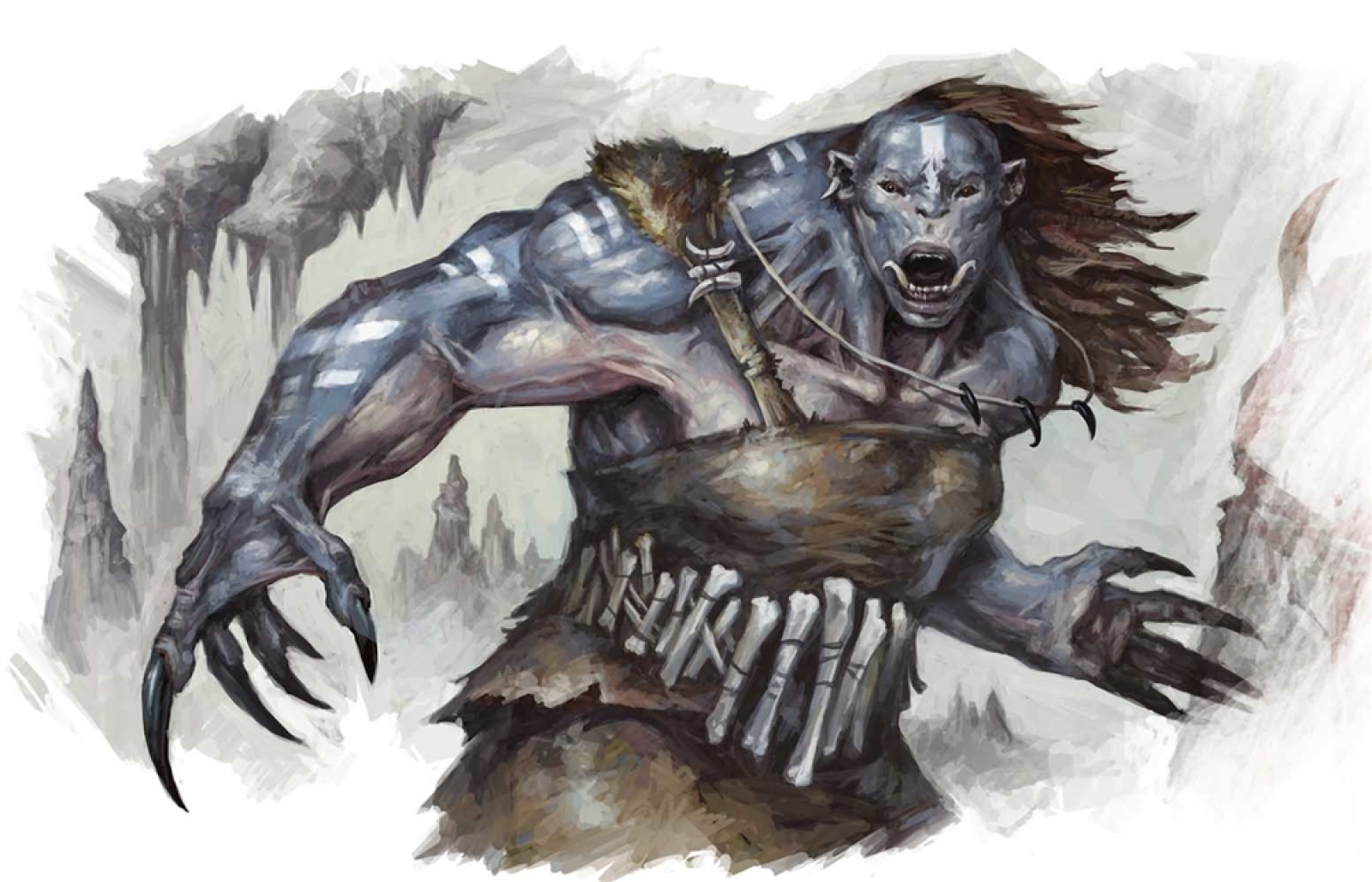 After the Barghest ran away through the dimensional door, the party decided to stay their course and took the door most left in the room. Crossing the hallway, they found a door at the end and Anlanya used her rat to see what is on the other side of the door and found out there where 5 orcs. They decided to check out the other hallway as well and they found it likely that the door next to it in the previous room would also lead to this room. They split the party to attack simultaneously, one group going through the right hall, the others the left. Ronan, still looking like a half-orc, went into the room first trying to talk to the orcs, challenging the main orc to a dance off. The orcs did not fall for his trickery and so the fight started. It wasn’t a long fight, but it was furious. The party killed the 4 orcs quite easily but the shaman orc (The Hand of Luthic) ran away through the back door before the party could follow. After disarming the trap the shaman orc placed on the door after he went through it, they entered a hallway. Carefully checking for other traps, they crossed the hallway until William got to the end and could look around the corner where he saw three orcs and could here quite a lot more. He was spotted by one of the orcs and after a short while, the booming voice of The Hand of Luthic asked “What brings you here?”. William responded and after some talking, they where escorted to a room where the boss (a Tanarukk) was sitting (tied down) on a stone chair. William took the lead in the conversation and The Hand of Luthic translated for Tanarukk. After some time talking with the Tanarukk, the party found out that the orcs never actually bothered anyone that didn’t provoke them. After some time, someone triggered the Tanarukk and he broke one of his chains before the Hand of Luthic could calm him down and per William’s request the rest of the party (and even the Hand of Luthic) where dismissed so William and the Tanarukk could talk in private. Little did they know Anlanya left her rat in order to be able to listen in on the conversation. William and the Tanarukk discussed a treaty where the party would not only leave the orcs alone, but they would also help the orcs by teaching the orc mages to conceal the entrance and pretend that they’d killed all the orcs (they would need about 30 orc heads for that which the Tanarukk granted without hesitation). William shortly explained the new situation and they stayed the night in the dungeon. The next day Ronan started to train the Hand of Luthic in the art of deception while the rest of the party had a rest day and where busy with everyday stuff (reading books, training, etc.). During the second night, they woke up because of all the noise around them. They saw lots of orcs all leaving the cave they where sleeping in and spreading around to the south east of the dungeon. The party decided to get dressed and thought it to be a good idea to talk to the Tanarukk, whom didn’t like hearing that there where goblins attacking. He didn’t like it so much in fact that he went into the rage the Tannaruk are known for and broke out of the chains and ran towards the east most hallway. The party followed and when they caught up with the Tanarukk, they saw him brutally killing some goblins and even though they where impressed with the display of violence, they decided to help defeat the goblins.   After the goblins where defeated however, the Tanarukk’s rage didn’t just end unfortunately and he started attacking everyone unlucky enough to be in reach. He also hit, and wounded, William whom with his Sword of Vengence, went into a rage of his own and kept attacking the Tanarukk. With lots of effort, Ykki managed to drag William away (breaking his rage) and not to long after, Anlanya (whom had ran away to get help) returned with the Hand of Luthic and he used his magic to knock out the Tanarukk. With the Tanarukk unconscious, Anlanya and Ronan offered to get the chains from the war-room (not disclosing of course that they where also planning on taking anything magical they could steal. In the war-room they immediately sensed the presence of some strong magic resonating from a vitrine with a scroll inside. Ronan scanned the glass for traps and found that the glass was in fact death-glass (quite rare and rather dangerous) but he did not see the ice-shards trap that was cast as well, triggering it when he tried to remove the crystal dome with the mage hand spell. The shard of ice hit him quite hard and he almost collapsed from the pain but he stayed conscious and they switched the scroll for one that looked a lot like it and ran back to the party with the chains to help tie the Tanarukk.

First steps in the Caves
Session Reports
A First Encounter with a Unicorn
Join The World Discord!