An underground sensation with a popular HeadSpace stream, Tragic Alice is an alleged member and vocal supporter of Kill Icons.

Behind her giant sunglasses, she has demure facial features, with round cheeks and a button nose. Tragic Alice has a large and expressive mouth; her wide and sometimes cruel smile is prominently featured in her streams iconography. Since she's never been seen outside of VR there is wide speculation about her actual appearance, and if Tragic Alice is a woman, man, or even a foreign AI sent to disrupt corporate business in Edge City.

Tragic Alice is known as a trendsetter, and is also considered a trend disruptor by designers in The Beltway. As a virtual avatar her outfits are limited only by her imagination and coding skills, and she has no shortage of either of those. Tragic Alice's style is too eclectic to narrow down a signature look, but she favors long coats, heavy layering, and neo traditional Japanese fabrics.

Tragic Alice has released no personal information since she began her HeadSpace stream in late 2030. She is a talented hacker and has successfully protected her location and identification from the Edge City Police, Securicorps, and her rapidly growing fanbase. Tragic Alice is a loud and proud member of Kill Icons, and her streams are focused on radicalizing the youth of Edge City by exposing corruption in law enforcement and encouraging acts of protest, usually in the form of vandalism or hacking.

Tragic Alice became one of the most watched Headspace streamers in The Canyons in a matter of months, due to her passionate delivery, wry humor, and cutting edge fashion sense. She has been the ringleader behind several notable acts of public disobedience including; causing a month long closure of Kwanchai Q. Degrassi Secondary School by hacking the security systems, blinding Securicorps monitor drones in The Lowlands, and organizing massive demonstrations throughout the Canyons.

The major themes of Tragic Alice's streams are justice and awareness. She believes that the people of the city have been abandoned in the Spiderweb by their police and their government. While Tragic Alice has no love for the gangs, her crusade is against the mega corporations that she sees as directly responsible for the violence and chaos that pervade everyday life in Edge City. 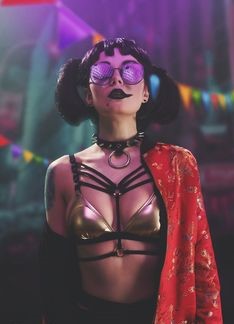 Wake up, Edge City! Is this going to be another day under the rule of faceless bureaucrats, or will this be the day you are finally ready to stand up and fight for your freedom!?