The kamakari (/kama'kari/listen) are one of the primary species of the Sora. The main species of the eponymous Kamakari Mandate, the insectoid kamakari have long plied the Sora in their lepicephs, utilizing their immense psychic powers to gain dominion over a large swath of the explored Sora. Kamakari are known as reserved, pious, and introspective with a deep respect for the Sora.
Contents 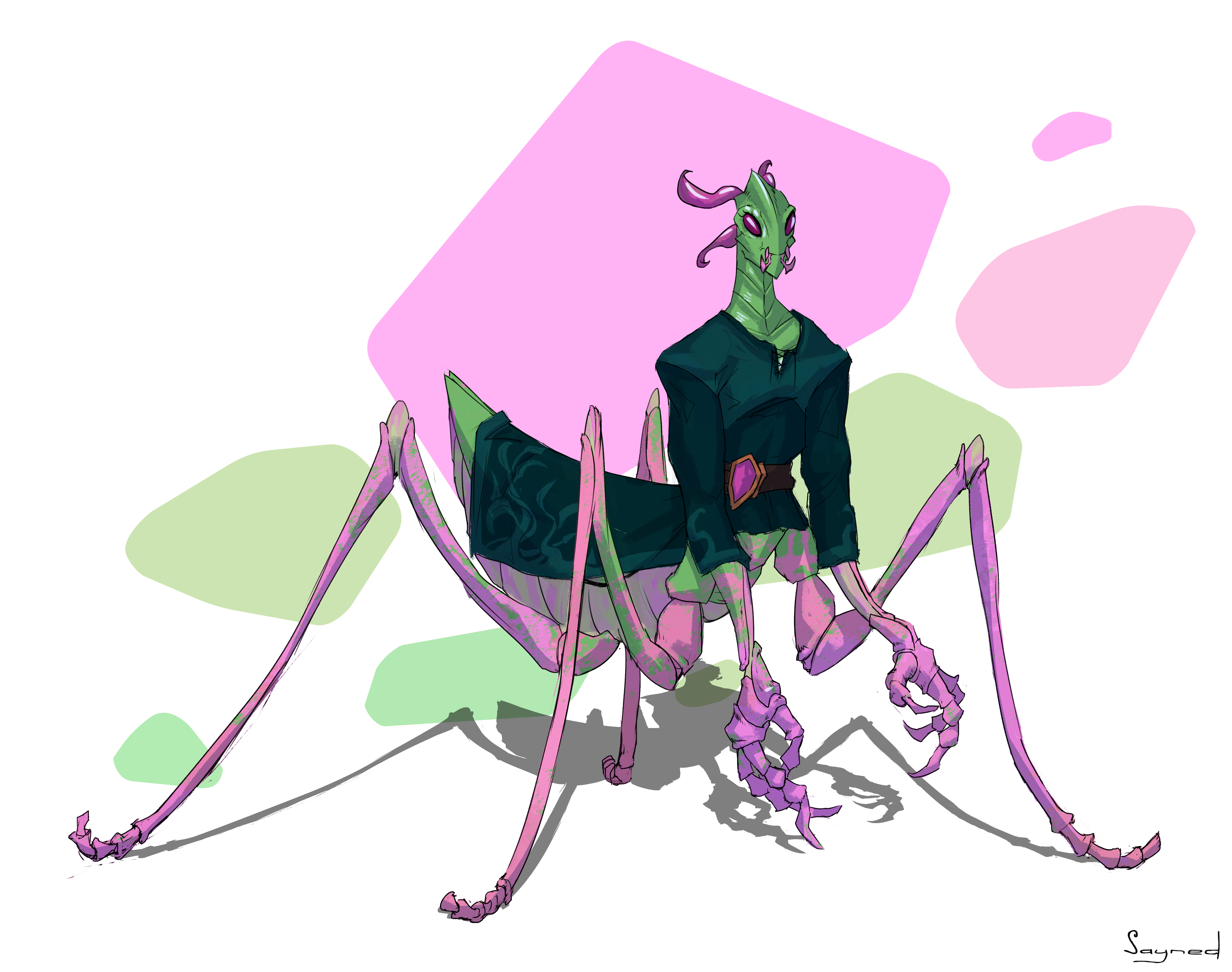 Kamakari are of average size and roughly humanoid-shaped insects. They passingly resemble mantises in body structure, although their heads are less triangular and they have three-fingered hands rather than raptorial forelegs. They additionally have four fleshy "tentacles" emerging from the backs of their heads. These tentacles play a major part of their psychic powers, enabling them to sense psychic vibrations and achieve limited telepathic communication.   They typically stand between 5' and 6' tall and weigh between 120 and 200 lbs, slightly less than a human of similar height and size. Unlike true insects, they do not have a complete exoskeleton. Instead, they have a soft flesh covered with chitinous plates. These plates are closely set on the face and digits, but have larger gaps on the torso, abdomen, arms, and legs at the joints and sides. The gaps in the plates allow the kamakari to more easily move and breathe, but cover the major organs, acting similar to the rib cage in humans. Both the plates and the flesh beneath are the same color, typically green, pink, yellow, or orange, though one may be slightly darker than the other.   Kamakari have two arms, which end in three-fingered hands, that are significantly longer than a human's arms, giving the kamakari exceptional reach. They walk on four rather thin, but powerful legs, with a swaying gait. Though they have a pair of fully-developed wings, the kamakari are too large to effectively fly. They typically use their wings solely for decorative purposes, such as in dance, but the wings do enable them to clumsily glide if they fall from a large height, preventing major damage.

The kamakari all possess some degree of psychic powers. While most are only able to interact with other kamakari, those who train or are gifted are able to manifest stronger psionic powers. Some have been known to read the minds of other species, influence their thoughts, and even cause them psychic harm. Regardless, all kamakari can sense when psionic powers are being used around them. Any activity done by non-kamakari induces a mild tingling sensation in their tentacles, often compared to hearing white noise.

Kamakari typically mate for life, though they do not have the concept of marriage as many other species do. Instead, kamakari who have reached adulthood will wait until mating season (a month long period twice a year) where unattached males will perform ritualistic dances and wing displays in an effort to attract a female. Once a female selects a male, the two will mate and the female will depart to a specially prepared "nursery" to lay an ootheca containing about a dozen eggs a few days later. These nurseries are usually wild locations on hospitable realms that are closely tended by other kamakari. The mated pair will then rejoin each other during future mating season, bypassing the courtship.   Kamakari hatch from their eggs after approximately 3 months. The newborns are small, usually only 3" to 5" in length and more closely resemble an actual mantis than adults. They have a true exoskeleton and are able to fly, albeit clumsily, and possess the raptorial forelegs of true mantids. These hatchlings lack more than basic animal intelligence and will spend the first three years of their lives hunting and growing. Over the first few weeks, they will molt every other day, doubling in size. At this point, their growth slows significantly, and they will grow at the rate of approximately 12" a year, until they reach just under 4" tall at the end of the third year.   At this point, the kamakari nymph resembles an adult, just smaller, with chitin plates on top of soft flesh. At this point, their psychic powers begin to develop, along with their intelligence. They lack the ability to verbally communicate at this stage, though they can understand words as long as they are backed with a strong enough psychic signal. Kamakari nursemaids begin instructing nymphs at this stage, teaching them to control their psychic powers.   They then slowly finish maturing for the next seven years, learning how to talk, honing their psychic abilities, and learning what role they will fulfill in kamakari society. An adult kamakari stops growing, but will continue to molt roughly once a year, repairing any damage to their chitin plates and regenerating any missing limbs or tentacles. Kamakari age faster than humans, reaching adulthood after about 10 years and rarely living longer than 80 years, with an average lifespan of 60. Kamakari remain healthy and spry up until their final year, when they experience a rapid decline. They will shed their chitin plates without regrowing them, eventually cease eating, and waste away until they finally die.

Kamakari are mostly carnivorous, feeding on a variety of meat. As young, they engage in ambush predation, sitting perfectly still, camouflaged against foliage before rapidly striking at prey and skewering it with their forelegs. Young eat their prey live, typically head first in order to incapacitate it and keep it from fighting back. Adults, with their ability to think and plan, engage in agriculture and raise livestock. Herders utilize their psionic powers to keep animals tranquil and placid. While they use most of their crops to feed their livestock, most kamakari do eat a small amount of vegetable matter, usually as flavoring rather than for any nutritive purposes.

Kamakari are relatively adaptable, able to live and thrive in a variety of locations. However, they do tend to prefer warmer locations and cannot be found in arctic climates at all. Additionally, they are poor swimmers and avoid ocean worlds or other realms with large amounts of water. Kamakari rarely inhabit realms that lack other insect species, preferring to settle among insect species when possible.

Languages. You can speak, read, and write Kamakari as well as one additional language of your choice.