Session 31: A Dark and Ancient Tome

In the bowels of House Cannith’s Headquarters, Vax spoke to the undead figure who noticed him from the arcane pen. He met Colonel Helmut Fenix, or rather Colonel 22, of Karrnath’s undead platoons, a prisoner of war who had been abandoned along with the rest of his platoon when the Mourning began. Vax convinced Col. 22 to speak with the rest of the group if he would help put his platoon to rest. Using a prototype rifle nearby, Vax broke the arcane barrier of Col. 22’s pen and discovered that the mist in the room had no effect on the undead colonel.   Col. 22 followed Vax out of the sublevel and into the hall with the rest of the Foundation and the colonel gave them as much information as he had. He spoke of Karrn’s theories during the war, that they believed House Cannith was attempting to find a way to return Karrnath’s undead troops to life and in so doing, stop them from fighting against Cyre. He also spoke about the day of the Mourning, how the normal artificers were accompanied by a stranger wearing dark military clothing without regalia who was lithe and athletic. The stranger and the artificers argued, then the stranger turned on the large engine in sublevel 5 and ran away while the artificers yelled about the engine “malfunctioning” as it began to spew out the mist.   Rasp asked about the nature of Col. 22’s undeath, and Col. 22 recognized Rasp as Karrn. When Rasp showed Col. 22 his scar, Col. 22 showed Rasp a dragonshard embedded in his forearm, explaining that all of Karrn’s undead troops had that. Surprisingly, he recognized the work of Elke Roth and asked if Rasp was her “perfect creation” she had spoken about. Rasp confirmed this, and Col. 22 commiserated about Elke’s madness. The foundation then asked Col. 22 what he wanted from them, and he came to the conclusion that he wanted to put his troops to rest and leave this life alone, falling from the open doors of the tower in sublevel 5. The foundation agreed, and Col. 22 bid them good-bye.

The sounds of the Karrn troops finally coming to rest masked the approach of another group that confronted the Foundation on the headquarters stairs. What at first appeared to be partly warforged turned out to be survivors wearing warforged masks. The one who led them removed his mask and Mila recognized the face and voice of Anatol Vespirov, the former arcane advisor to her father. The rest, she also recognized, for the most part. This party of survivors included Madame Vivica, a middle-aged human woman and Mila’s former firearms master, Baron Tevya Ir’Drakkard, a heavy-set green scale dragonborn who met Mila briefly in her childhood, Uvan Hammlish, a goblin woman and the lady’s maid or Mila’s sisters, and a pair of half-elven twins both of whom were former Watchmen in Cyre.   Together, the two groups returned to the city center underground in Making. Vespirov revealed that most of the mist in Making was an illusion and he removed it, showing Mila that there were not hundreds, but thousands of survivors living in Making. 100,000 survivors living in the self-sustaining and protected city. Vespirov led the Foundation to a large rotunda and set them up in a side room with plenty of space and cots to rest on. After a while, Vespirov returned with Madame Vivica to speak with the Foundation in private.   Vespirov told the Foundation that their small group had actually been surviving in Vidsk where another 50,000 survivors had managed to live since the Mourning. They had made the crossing and arrived in Making about two weeks ago when they met the other survivors. They had spent the better part of those two weeks looking for access pucks to gain entrance to the House Cannith Headquarters, looking for answers just the same as the Foundation. Bal then told Vespirov and Vivica all they knew about the Shadow and what they had discovered in Cannith’s headquarters. Taking this in, Vespirov admitted that this added kindling to a theory he had. A theory that had to do with an arcane state secret.

When the Tsar’s arcane advisor takes up their role (a role they keep for life), they are shown an artifact that the line of Galifar have kept for over a thousand years. In the Royal Armory in Metrol, there is a tome known as the Black Stag Bible, a relic of House Vol. This relic is said to contain all of the black magic that fueled House Vol’s power. When Galifar I destroyed House Vol, he decided against destroying the Bible knowing how much power must be contained within. Ever since, every Arcane Advisor to the Tsar has read the Bible and kept it open for the next advisor to read. However, when Vespirov took up the role and read the tome, he closed the book (which locks itself) and attempted to remove his memories of reading it. But, memory spells are complex and difficult and some tiny remnants remained, remnants that will not leave him alone. On top of that, he left himself a single note which read, “It wasn’t fully broken, but they were close”.   Vespirov believes that the Mourning has something to do with a very dark ritual contained within the Black Stag Bible and he needs the Foundation’s help to retrieve the Bible so that he can read it again. However, he admitted that the mission was not so simple as the Bible, once closed, requires three very esoteric artifacts to open. Namely, the Primarch’s Eye, the Incog of Gideon, and the Seal of House Vol. Bal quickly told him that the Foundation had all three, which took Vespirov some time to come to terms with. Madame Vivica has the key to the Royal Armory and the Foundation was asked to choose which of the two would accompany them and which would stay with the survivors of Making to coordinate. On top of this, they asked for Mila’s help in Vidsk as they know of a secret escape tunnel in Tsar’s Gardens, the royal summer home, that only a royal can open. If Mila can open this, the survivors may be able to flee the Mournlands into the Talenta Plains, avoiding the border. However, the Foundation were worried about the political ramifications of 50,000 refugees pouring into a city in the Talenta Plains.   The Vidsk party also told the Foundation about their difficult crossing from Vidsk to Making and marveled at how easy the Foundation’s own crossing had been. They then told the party that, for speed’s sake, they would want to leave in the morning for Vidsk. As the party began to get some rest, Mila took Vespirov aside and spoke to him about her parents. Vespirov confirmed that unfortunately they had died on the day of the Morning, but they had not been mutated, but went down fighting for their people and their country. Vespirov asked about Mila’s siblings and was elated to hear they were doing well.

Vax, when preparing for bed, felt that his bag of strange coins had grown heavier and opened it to see that there were four inside. The party eventually allowed themselves to relax enough to sleep in the protection of Making. In the midst of the night, Jin was woken by one of the twin half-elves, asking him to follow him to speak. Jin followed out into the rotunda and the figure rounded on them with a blade that vibrated in his hand. The figure then shifted form to match Jin’s and said, “We have a lot to talk about.”

Other things of note: 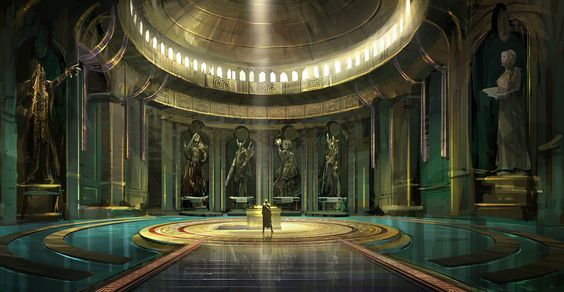