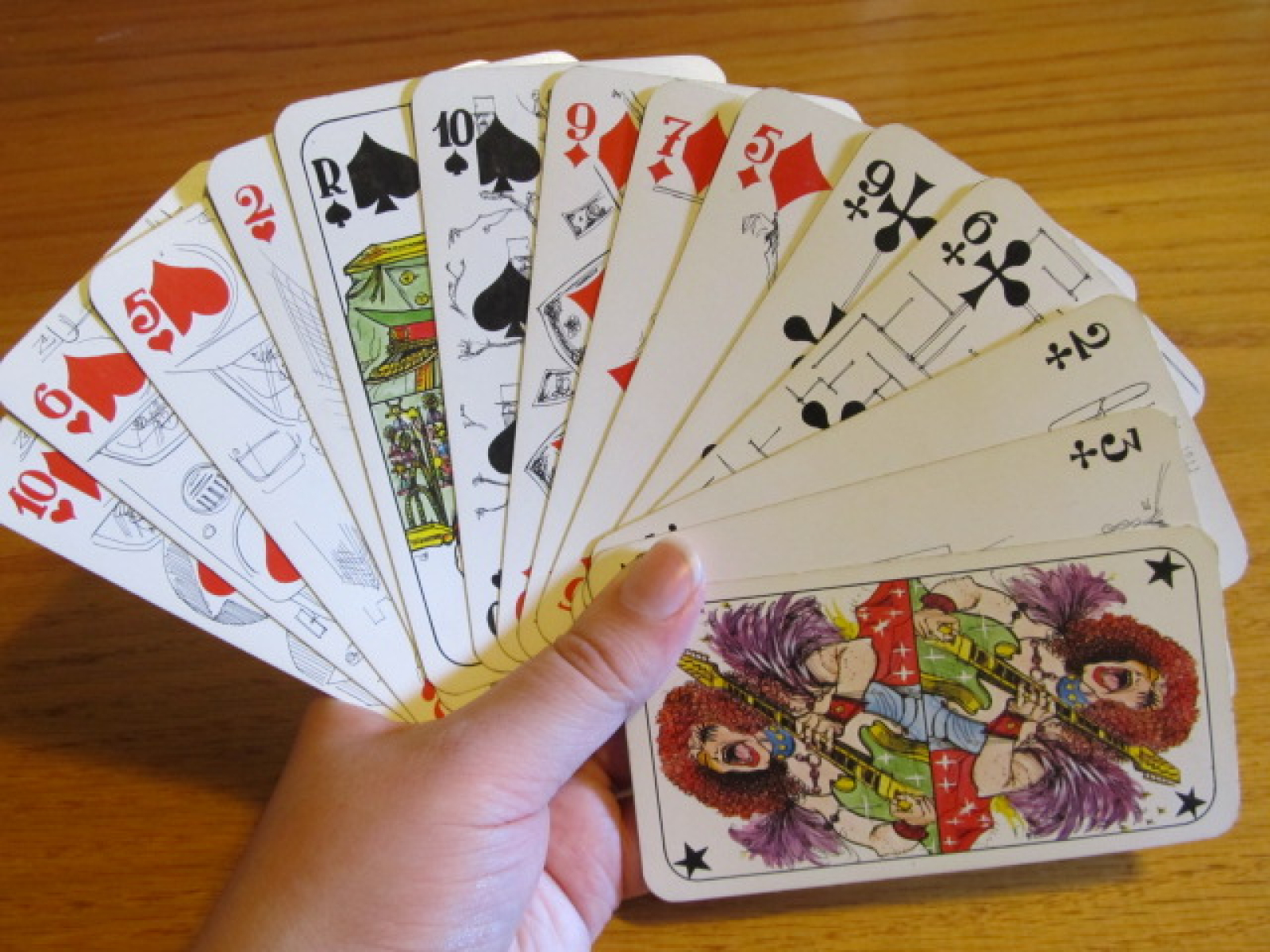 I learned Cheat Trick growing up, so I was surprised a few years ago to learn from a Deathwalker friend of mine that it actually originated with the seers.

Cheat Trick is a press-your-luck trick-taking game played with a common 57 card pack. It was created a hundred and fifty years ago by Deathwalkers as a variation on an older game which they learned while on assignment. They brought it back to the Deathwalker school, where they taught it to others, and it soon spread through the entire Seer community. Outside the Deathwalker school, the game is used among Seers to help children develop their Sight gifts. The game has since spread, however, beyond the Seer community, and can be found in many places. It was even included in the most recent edition of Iakovou's Official Book of Card Games. Though the rules are rather complex, it is considered a children's game in Seer communities because most Seers learn it from a young age, and it is used as a tool for teenagers to develop their sight gifts.

Cheat Trick is a game for four players and is played in three phases: the deal, the bid, and trick-taking.

The dealer deals a packet of seven cards to each player. The players may look a their cards. Then, starting with the player at the right of the deal and going counter-clockwise, each player votes to "play," (or continue the deal) or "veto" (to redeal). Before voting, each player may, but is not required to, say any number of phrases to declare what cards are in their hand, such as:     The dealer does not vote, but if the deal continues, they may declare what cards they have in their hand before the next round of dealing.   On the second round of dealing the dealer deals a packet of six cards to each player, and the vote occurs again. If the deal continues, the last five cards are dealt face-up, one to each player, and one to the center of the table. There is no vote after the third deal. The center card determines the trump suit, but is otherwise not used for that round. If the fool is picked, there is no trump suit. This card is usually placed face up in front of the person to the right of the dealer.

Starting with the player to the right of the dealer, and going counter-clockwise, players bid on how many tricks they can take. On a player's turn, they can raise the bid of the player before them, or pass, keeping their bid at the number of tricks previously bid. If they have not already bid, their bid is at one. The number of points a trick is worth for each player is equal to the number of players who have passed so far, including themselves. Therefore:     After the third player passes, the last player may bid themselves up one more time. If they do, their tricks are worth five points.

The player to the right of the dealer leads to the first trick and may play any card in their hand. Play continues counter-clockwise. Players must follow suit, unless they do not have that suit in hand, or if they have the fool. The fool may be played at any time, but cannot win a trick. Only a card which follows suit or a trump card may win a trick. The player with the highest card wins the trick and leads to the next trick. Play continues until all players are out of cards.

Example:   Tory, Rodney, Ramona, and Sara are playing a game.   Sara is the first to pass, with a bid of one.   Tory passes before bidding, and therefore has a bid of one.   Rodney is the third to pass, with a bid of 2.   When Rodney passes, Ramona is at a bid of three. She is allowed to bid herself up one more time, but chooses not to.   During trick-taking, Tory wins six tricks, Rodney wins two tricks, Ramona wins five tricks, and Sara wins zero.   Tory had a bid of one, and won five over that. Because she was second to pass, each trick she won over her bid is worth 2 points, for a total of 10.   Rodney bid two and won exactly two tricks. Since he did not go above or below his bid, he gets 0 points.   Ramona bid three and took five. Because everyone passed before her, she gets 4 points for each trick she won above three, for a total of 8.   Sara had a bid of one, but did not take a trick. Because she was first to pass, she loses one point for every trick she failed to take, for a total of -1.

After players have scored, the deal is passed to the right, and the second round starts with the new dealer. The player with the highest score at the end of four rounds is the winner.

The game's name, Cheat Trick comes from the use of bluffing in the game. When declaring the highest trump card, or declaring cards during the deal, players may bluff, and there is no penalty for lying. Bluffing is encouraged as part of strategy. For example, a player with a poor hand might declare high cards during the voting to encourage other players to veto the hand. Seers are encouraged to try to use their site gifts to determine who is bluffing or what cards other players have in hand.   While bluffing verbally is encouraged, players must strictly follow rules while playing cards to tricks. If a player cheats with a play, by not following suit when they have one in hand, for example, the player that catches them may take one of their tricks.

Some people choose a veto limit at the beginning of a game. This is the maximum times a player is allowed to veto a deal during the game.

Some people play that the black suits are "paternal," but the red suits are "maternal," meaning they have a sort of reversed order:

The game is usually played with four individuals, but can be played instead with two teams of two. In the team variation, teammates sit across from each other. Game play continues as normal, but before the score, teams declare which tricks count for each member.

Example:   Tory and Ramona are on one team. Rodney and Sara are on the other.   Tory opens with a bid of four   Rodney passes first, before bidding, giving him a bid of one.   Ramona passes second, also before bidding, giving her a bid of one.   Sara bids five.   Tory passes third, with a bid of four.   When Tory passes, Sara may bid herself up, but chooses to stay at a bid of five.   During the course of play, Tory wins three tricks, Rodney wins four tricks, Ramona wins two tricks, and Sara wins five tricks.   Tory bid four, but won only three, making her one trick short. This would normally mean that she loses points, but her teammate, Ramona, has one trick above what she bid. Ramona gives her extra trick to Tory, meaning they both made their bid exactly, leaving their team with 0 points.   Sara made her bid exactly, which would normally leave her with 0 points, but her partner, Rodney, has three extra tricks. If he keeps them, they are only worth 1 point each, so he gives them to Sara. Rodney gets 0 points. Sara gets 4 points each for the extra tricks, giving her team a total of 12.

A simpler version of the game can be played by eliminating the voting and card declarations. This version is often used to teach Cheat Trick, and is played by younger children who struggle who do not fully understand the bluffing stage.

Cheat Trick is played with a common 57 card pack, consisting of four suits of 14 cards each and 1 fool. Each suit has four court cards: king, queen, prince, and princess. The remaining cards in a suit are pip cards, numbered 1-10.