Your arrival at Kharesh is met by a small circle of flying beasts. After your attack by giant vultures outside Darkwater, you’ve been keeping a closer eye on the skies, so you see them first. Great hawks with four legs, they make a tight circle above you, purposefully moving so the sun is in your eyes.   With a sudden jerk, you watch as one breaks off from the group and dives straight toward your caravan. Its claws stretch out, and an angry screech goes through the air. You immediately dart to the side, and the creature skids on the ground right next to you.   It is a beautiful animal, despite the fact that it just tried to kill you. Up close, you can see its bright brown and gold plumage. Its beak is broad and has a red splotch of colour (blood?) on the front. Each feather ruffles as it hits the ground, its sharp claws raking across the dirt. One beady black eye looks at you and it screeches again, deafening at this distance.   At this point you see a young dwarf pick himself up from the ground at the other side of the beast. He laughs a hearty laugh and gives you a quick look before looking back at his mount. For mount it is; the light brown saddle blends into the surrounding feathers and the dwarf has thin reins tied around his hands.   “Well, look what the cat dragged in!” the dwarf says with a chuckle, “A bunch of crouchers! We’d thought we’d give ya a warm welcome to the city!” He winks conspiratorially at the other dwarves riders around you. “Now, on to Kharesh…”

Griffons look like a blend between a horse and a hawk. They have sharp hawk-like beaks and claws, while their lower half has four legs as opposed to the two of a bird. They have a set of strong and beady eyes like birds of prey, and they have great powerful wings that they use to fly with great speed.

Griffons, like birds, lay eggs. The eggs themselves are about the size of a small clay pot and have a mottled appearance. The female and male griffons will guard over the eggs until they hatch, at which point the male griffons leave the rearing of the young to the female griffons.

These beasts adore the sides of mountains and large canyons to roost in. They don't prefer the tops of mountains as they are too cold, while the ground is too dangerous for their young. There they make their nests, using branches from nearby tall trees and rocks from the nearby ground.

The mountains and canyons where they live are also filled with various other birds that they hunt. Water-filled canyons or large lakes contain fish for them to eat as well. While meat is their preference, they will eat certain tree leaves and domesticated ones have been conditioned to like the taste of hay and oats.

The weddelar domesticated griffons sometime in the First Era, and no major dwarven settlement is complete without its griffon riders. Domesticated griffons have more colour variety, as previously mentioned, but also are much less aggressive and territorial than their wild counterparts. They are much more comfortable around humanoids and can be ridden with properly made saddles.

Griffons are heavily used by the weddelar, who use the fierce animals as beasts of burden and guards for caravans travelling from town to town. Many are trained as mounts in times of war as well, learning how to attack groups of soldiers with deadly alacrity. 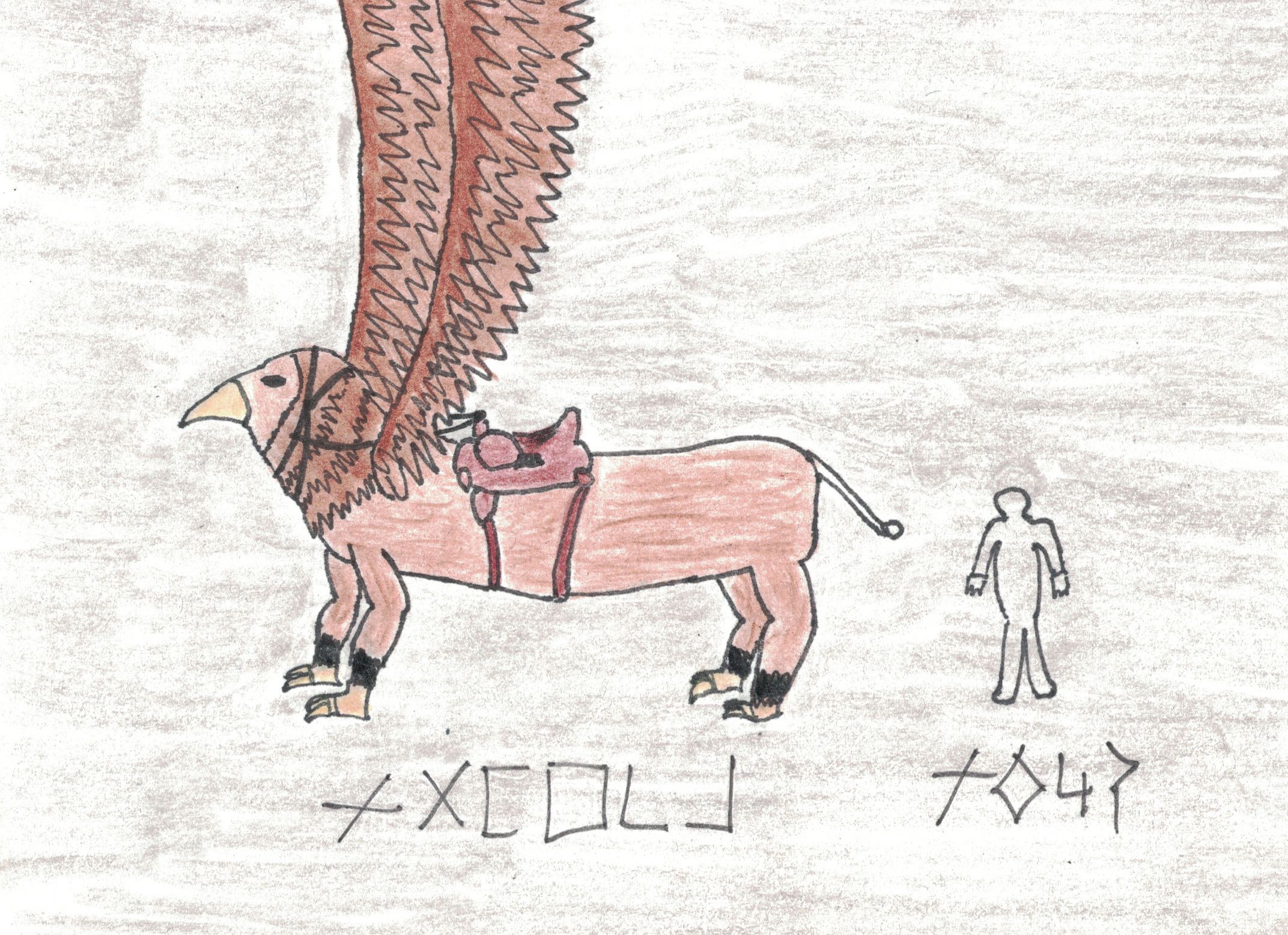 A saddled griffon, with a dwarf for scale.

They are mostly found in the mountainous areas of northern Sedesta, mainly the Kral-Dogash and the Craggy Peaks.

Griffons can have a wide variety of feather colours. Non-domesticated griffons tend to be various shades of brown or orange, but rare blue, green, or purple griffons have been seen in the wild. Their colour possibilities are so wide that the weddelar often specially breed griffons to get certain rare colour patterns or consistent rare colours like black or red.
Art Credit: emperorcharlesii (me!)