Loves fun. Loves to laugh. Loves hunting with his brothers. Loves spreading fear and chaos, chasing prey, and taking from others whatever he wants to have. Siren is not a nice tank.   He can behave, mostly when his brother and platoon leader Dresden tells him to. Unfortunately, the moment Dresden looks away, Siren is already up to mischief again. A thrill-seeking personality, he constantly needs to get into some trouble or else will get bored out of his mind - which will lead to destructive and thoughtless behaviours.

"We're going to attack your
town, and kill everyone in
it."
— Siren, to AMX

Spoiler: That didn't go too well. 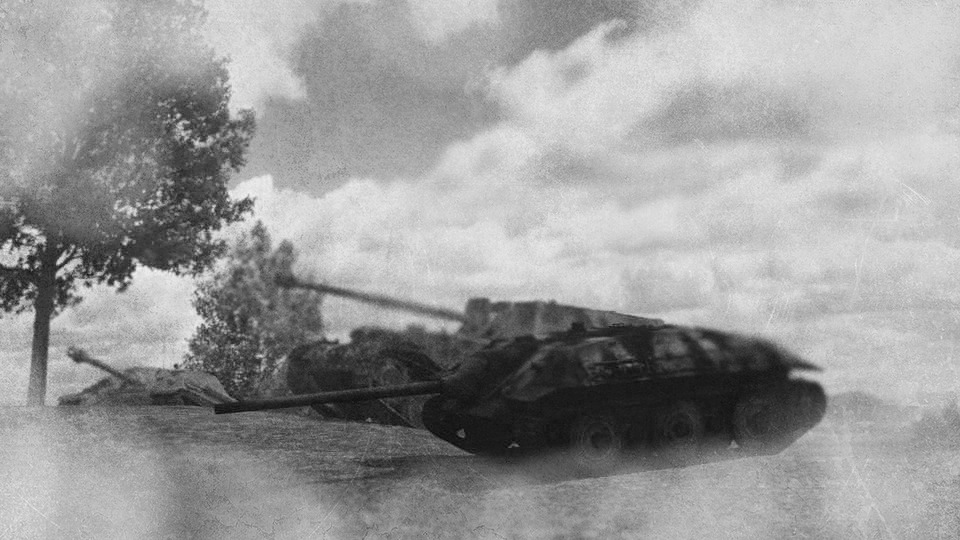 Flashy camo paint easily draws attention on him if he wants it - he has an uncanny ability to blend in with his environment easily if he wants to remain unseen.

Allegedly built in the North. No one seems to remember him in its southern parts, but he claims the reason for this is that he lived there "ages ago". Further up north, he is more (in)famous, after spending some years terrorizing the inhabitants.

In this unfamiliar territory, he didn’t know where to go next. He could only rely on Siren — the last tank anyone should rely on when it came to anything but killing. The little E-25 claimed to know his way around here, claimed he had been in these parts before. But just going to wherever he … suspected teams hadn’t worked well for them, so far.
— The Tanking League, Chapter 9

Siren isn't shy when it comes to talking about his past, but his narrative tends to be hard to follow. The stories are disjointed and sometimes contradictory; details get exaggerated or emphasized to the point where he forgets the "plot" of the story he was trying to tell. He doesn't make a secret of the fact that some parts of the tales he tells are completely made up.   Even his brothers aren't entirely sure what really happened before they met him, but neither have the patience to filter out the truth from his ramblings. 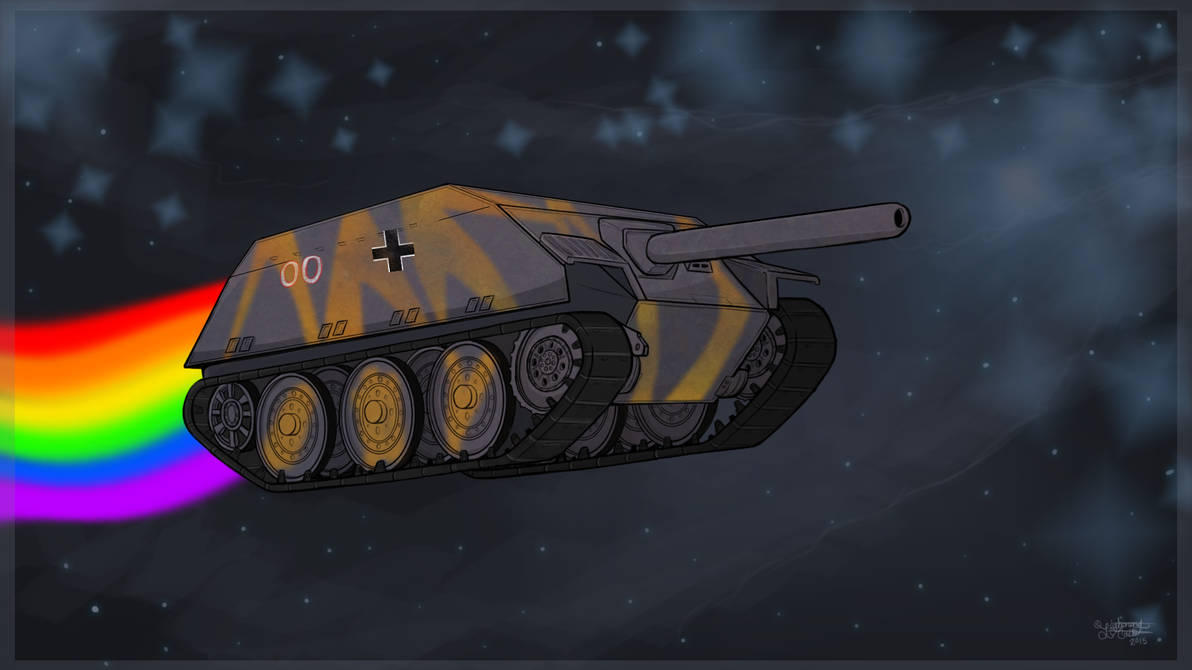 by LightningCato
The double zero insignia on his side seems to be a remainder of his past. He always makes sure to have it visible, fixing the paint if necessary. Curiously, this is one thing he doesn't talk about at all, even when prodded. 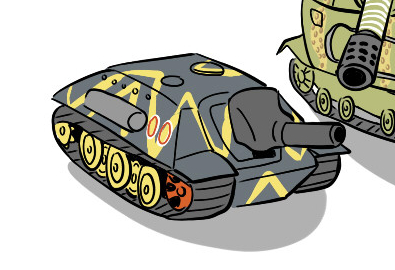 "People always shoot down my ideas and I'm sick of it. Two sentences in and everyone's already shouting 'what the fuck that's illegal', or 'you can't do that'. Let me talk dear god."
— Siren, probably [original by pemsylvania] 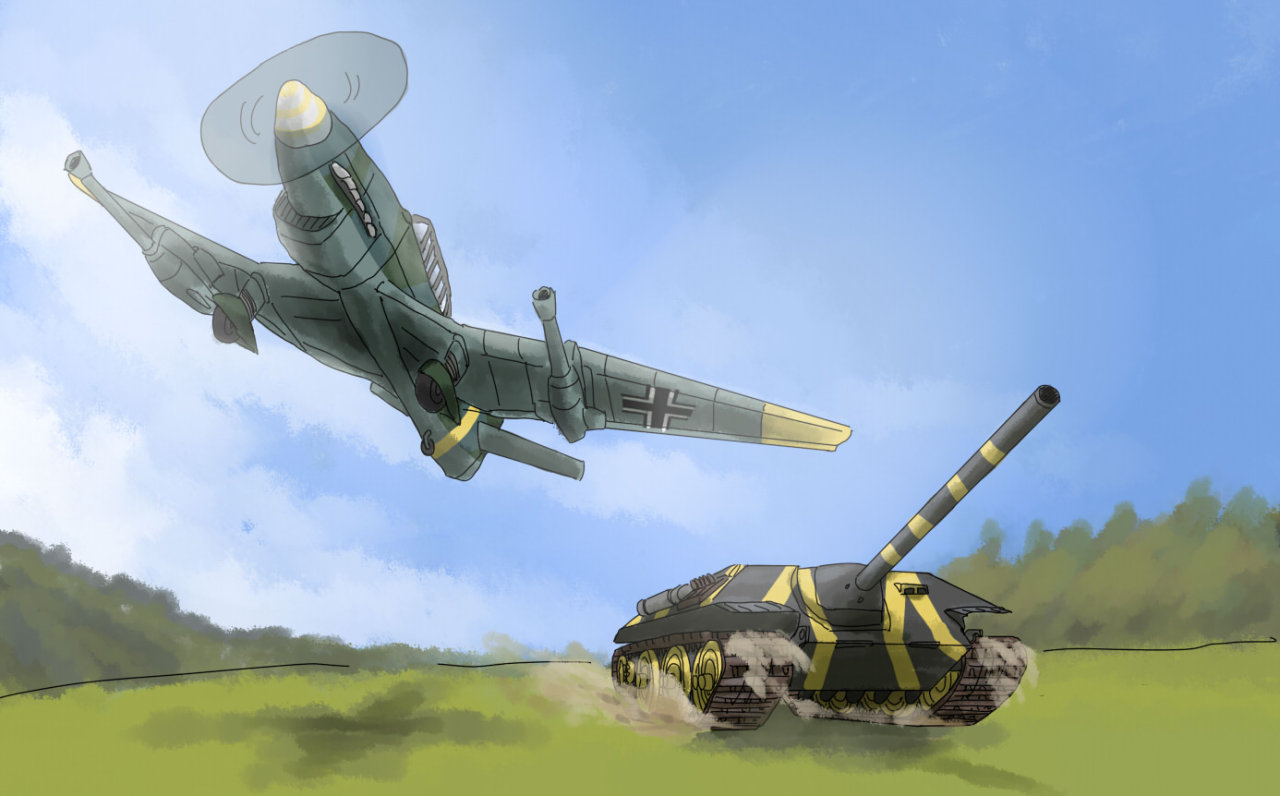 Name Origin
When speaking in a normal tone, Siren does not have an inside voice. Most people assume that's where he got his name from, but according to himself, he simply chose it because he likes the sound of air raid sirens.

Trivia Time
Siren, as a character, used to be a whole lot less nice than he is now. His personality was reworked a bit and brought back in line with the original concept, after he went a bit ... out of hand for a while.
Main Stories

The Hummelverse and The Tanking League are my creation. All content - including art - on this page was created by me, unless otherwise stated.
Want to submit content like fanworks, ideas, characters? Please note that you are accepting these terms if you do.
Back to top
Article template
Character
World
The Hummelverse
Category
Main Stories in Characters
Author
arty
Publication Date
19 Sep, 2019
Creation Date
30 Aug, 2018
Last Update Date
19 Sep, 2019
Visibility
Public
Views
439
Favorites
5
Comments
2
Tags
the-pack

This is a well done article! Siren seems like a fun character. I just have a couple questions. I don't have a lot of context for your world; I did read the introduction but might have missed things, so they might be answered somewhere else.
Does Siren paint on camouflage or is it like a cuttlefish situation? Is there a reason he's so much better at this than other tanks?
I gather that the people he would have terrorized up North would also have been tanks? Does he have any damage from that? Is someone repairing them when they get damaged?


"People always shoot down my ideas and I'm sick of it. Two sentences in and everyone's already shouting "what the fuck that's illegal" or "you can't do that". Let me talk dear god."

There should be a comma separating 'that's illegal', and use single apostrophes for quotes within quotes: 'what the fuck, that's illegal!'
It was an interesting read, if a little confusing to me because I haven't read anything from your world before. That might not be a problem for regular readers! Overall, he seems like an entertaining personality!

Thank you for your comment! :D   I imagine that he's just very practiced at not being seen! With many years of experience at hunting, he just knows what to avoid in order to not draw attention on himself. (Turning off his engine for some time, using foliage and such to conceal himself, etc.) His tank type is rather small compared to other tanks, so it would be easier for him to hide by default.   Tanks in my world can repair minor damage on themselves, but there's also mechanics (which are specialized vehicles) and workshops for more severe damage. That way, when they get hurt in battles, they can usually just fix the damage and move on. No worries, you're right - it can be rather confusing when you're not familiar with the concepts of my world.   Good catch on the quote, I'll go fix those things!

You're totally right, I will change that!