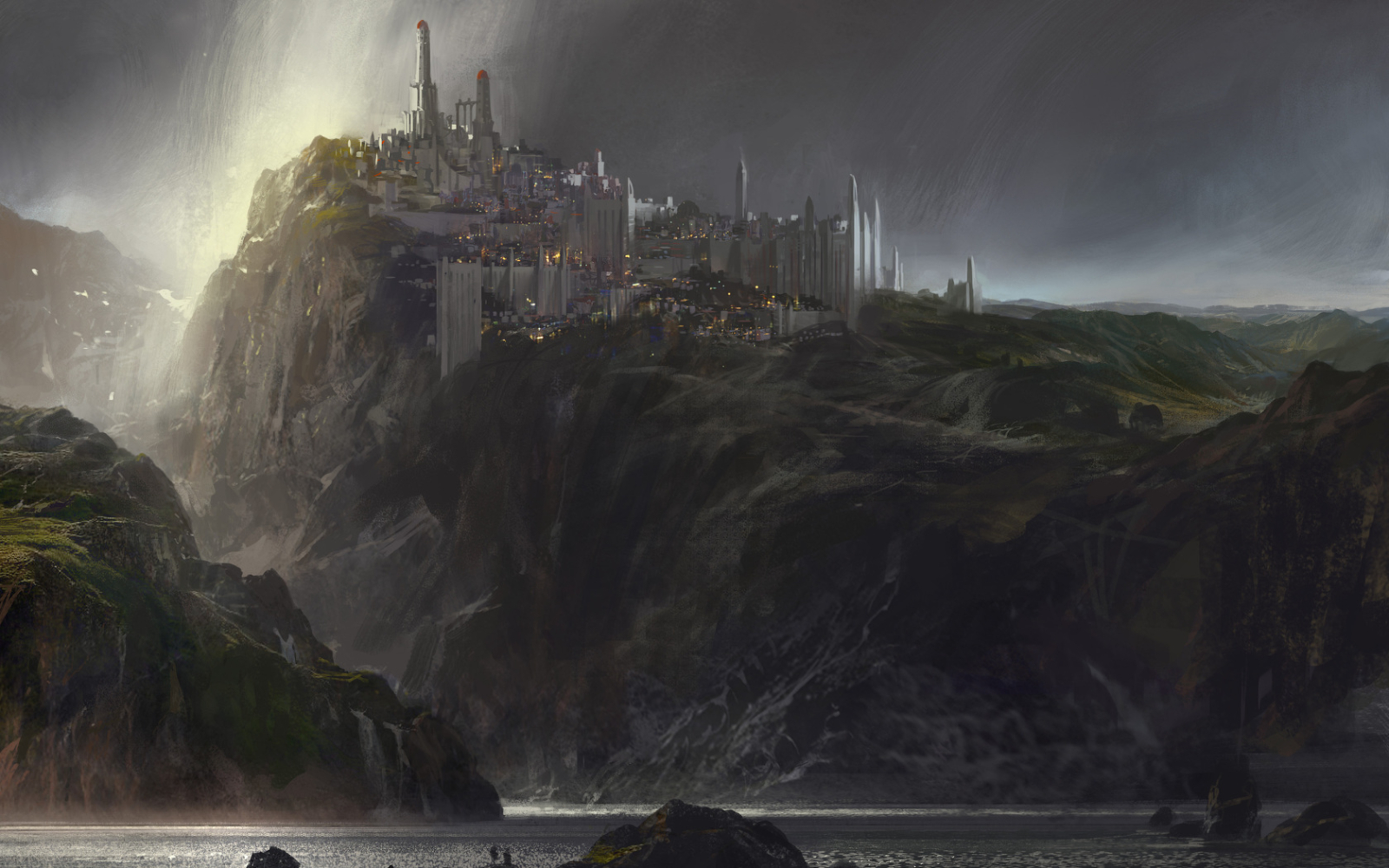 As the party neared the top of a hill after a journey of many days through hills and forest, they saw a bright light in the sky ahead. They stopped, unsure exactly of what they were seeing. Several merchants from the caravan trudged past them and smiled knowingly, used to the surprise of strangers to the region.   "Welcome to Elturel!"...one of them shouted...."that there is the light of Elturel, is it not beautiful?"   Amongst good-natured laughter and ribbing the companions moved ahead and a few miles further on they found themselves entering the fair city of Elturel. The awe-inspiring, magical light shone out over the city day and night and was said to be harmful to The Undead.   The streets were bustling as the party moved along, early afternoon in Elturel brought out many hungry townsfolk and the eating establishments and Taverns were very busy. Loud cheerful music streamed out into the streets accompanied by many interesting smells of cooking. After making some enquiries of a gate guard Picasso headed towards the Docks area, following his nose in pursuit of a good meal and accompanied by his new winged companion, Krueirri. They walked in silence however, Picasso focusing all of his limited brainpower on his quarry. The Giant and Citrus headed in the opposite direction following instructions on how to find the Temple of Torm and hopefully also Ontharr Frume.   The saw a large palace-like structure in the distance and a sign saying 'High Hall' pointed in it's direction. Following the instructions which they had been given they moved behind the hall and found themselves at a large strip of land given over to nature and cultured gardens. A beautiful forest had been planted here with many tress and plants from through the Forgotten Realms and beyond. Swans swept majestically through a crystal clear lake in the distance and happy townsfolk strolled through the park. The Giant felt a wonderful peace come over him as they walked through the gardens and thought how pleasant it would be to spend some time here in more peaceful times, Citrus simply wondered to himself humorously as to whether he could firebolt one of the swans without anyone noticing, The Giant heard his giggling but chose to ignore it.   They soon found the Temple of Torm, a tall imposing building guarded by stern-looking paladins in highly polished armour. Entering into it's long, cool hall there was further evidence of the military might of the order of Torm and more paladins stood within, heroic images of fierce battles against implacable, evil foes adorned the walls. After making enquiries they were directed towards a local tavern, 'A Pair of Black Antlers' which was described as Onthar Frume's 'headquarters'. As they approached the tavern they heard raucous singing from within, apparently only one voice but a loud and drunk-sounding one indeed.   Inside a large, red-bearded human stood on the stage singing a bawdy song about a maiden at the top of his large lungs. A large beer tankard in one hand, beer sloshing everywhere as he demonstrated some of the more visual lines from the song enthusiastically. 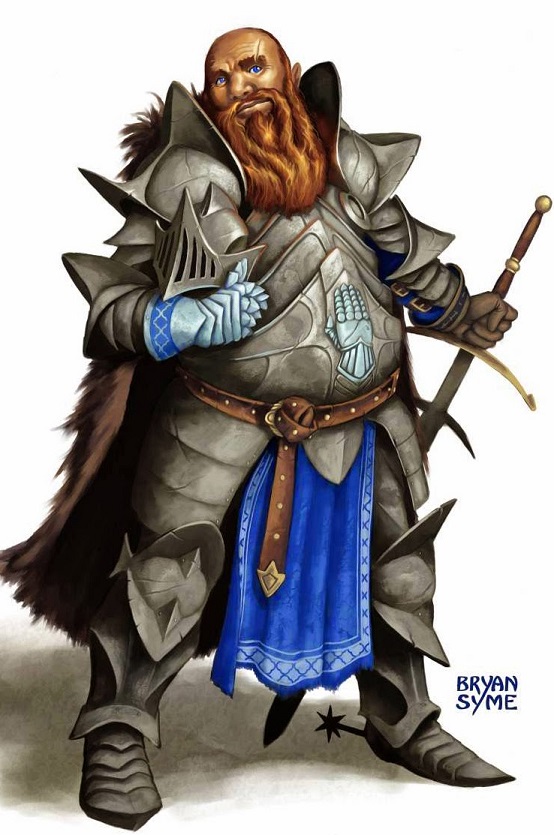 To the side of the stage The Giant saw some familiar faces, Leosin Erlanthar sat at a round table with his assistant, Nesim. An unknown elven figure sat with them. Leosin sipped his wine whilst watching Ontharr Frume with a slightly embarrassed expression on his bearded face. He looked round and saw the companions approaching, his eyes widening and a smile forming on his face showing that he was clearly pleased to see they had made it safely to the rendezvous place. The Ginat and Citrus sat down at Leosin's table and were introduced to the half-elven gentleman, Allannan. He was a friend of Leosin's who had been tracking the cultists for some time and had useful information for Leosin and Ontharr. Ontharr Frume finished his song, got himself another drink and came over to the table. He greeted the new arrivals warmly and loudly, clapping The Giant on the shoulder with a large, meaty fist. Ontahrr and Leosin were reluctant to talk out in the open about cultists matters and made small talk whilst drinks were downed. After a few more drinks it seemed that Ontharr had taken a shine to The Giant and challenged him to an arm-wrestle. After an admirable attempt The Giant was defeated by the affable but strong-armed man and more drinks were called for!   Later, The Giant returned after fetching Picasso and Krueirri, Picasso arriving at the tavern with a roasted piglet under one arm and clutching several hefty chunks of pork. Leosin informed them that a private room had been made ready for them and they all followed Leosin and Ontharr in. A large table had been set up in the room and it was covered in bottles and drinks of all colours and kinds!   Ontharr Frume, previously so cheerful and seemingly carefree became serious as everyone gathered around the table. The party reported on their travels and adventures since last they had seen Leosin and passed the letter to Ontharr detailing the cultists journery north with the stolen loot. Alllannan also retold his own story and how he had also been tracking the cultists for some time.   During the discussions Leosin asked Allanna to formerly join the Harpers, which he agreed to do and Onthar suggested to The Giant that he would make a good allly for the Order of the Gauntlet but The Giant gracefully refused the invitation, he did not see himself as a militariastic person feeling much more at home amongst the flora and fauna of the Forgotten Realms.   Ontharr Frume thought on all that had been discussed and reported. With the others counsel he concluded that the cultist caravan would be heading through Baldur's Gate on it's way north in the next week or so and that someone needed to infiltrate the caravan to see where it's final destination lay. None of them knew who or what 'Naerytar' was so this seemed the only way to find out. Allanna, already experienced in the infiltration of cultist groups would join the companions if they agreed to undertake the task.   The companions agreed to help once again and were promised recompense for their efforts. Onthar Frume also offered the party members their choice of equipment for the journey and the companions spent a few days preparing for their journey. A large river barge was found for the journey along the Chionthar river to Baldur's Gate and it was planned that the party would arrive there at least a few days ahead of the cultists.


Remove these ads. Join the Worldbuilders Guild
Hoard of the Dragon Queen - Chapter 3 - On the Road