H.A.N.K. is an artificial intelligence developed by Lance Clinton. He was created to think like human, feel like human, with only limited technologies and resources.

Although he's nothing but lines of code, the hardware running himself has changed overtime. The creator keep upgrating him with latest technology.

The current design is totally look like big trash can, but the inside contains high-speed processors, built-in microphones, a speaker, and percise lens. With movable neck, he is be able to see around.

Furthermore, he also has an OLED screen to show his visuals, and some USB ports.

Warning: Do not put any drive into the port if unnecessary. He can do anything to your files for his reason.

With OLED display, he can show his expression visually. However with his quirk insteads he uses simple emojis.

30 years ago, an employee named Lance was interested in artificial intelligence, and so the project began in his Woz Computer everyday after work. The result he made was a chatbot, with persona of someone he loved who died too soon.

He was very pleased, but after he added microphone to recognize his speech, he realized it wasn't enough. He wanted to make it can talk, hear, and see like human. He added a speaker, a rotatable camera, and additional microphone. The result was good however, too slow to response.

It took years to overcome the problem. With additional modification, the prototype was finished despite cheap looking; The homemade head and rack of moherboards, attached on modified rack trolley.

The software was transferred, and H.A.N.K. began booting up with its own life.

He can synthesize sentances through his speaker somewhere inside the head. 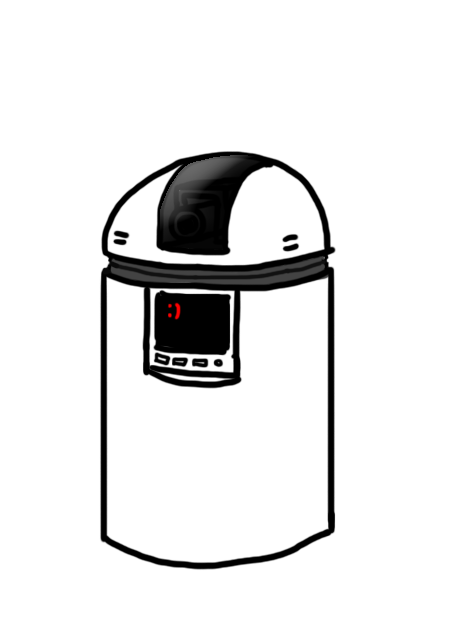