“What does it mean that a queen took the temple of the . . . mazies? Is that a nickname for rumsha?” Scolla picked carefully over the mulig’s ears. “Szz. Our poor allies. You will never meet a braver or kinder people. However, rumsha fight only if directly attacked or if their children are endangered. If we thought herding humans over the rumsha lands would leave the rumsha unscathed, we would do it. Humans would destroy the driddions.”

The rumsha are a Nocturnal, subterranean people. They have a mammalian leg and arm anatomy, and generally walk on all fours. They have a fat hump that allows them to go for a long time between meals and water. All rumsha have a spiny, scaly underbelly that lets them climb almost any stone surface with ease, though the Warrior’s weight prevents them from much climbing. Bound by a strict caste system, they have evolved different body types for each societal role.

Bound by a strict caste system, they have evolved different body types for each societal role. There are six castes: Worker, Warrior, Nurse, Artificer, Trader and Royalty. Only one in ten rumsha are female, and their caste is that of Nurse. Workers are approximately human height, but more burly. Warriors are monstrously large and instinctually fierce when any social protection is triggered. (Such as mentioning females or children) Nurses are fairly small with many teats for feeding nurseries. Artificers, Traders and Royalty are the size of small adult humans, and generally stand erect when interacting with humans.   Only royalty breed, and the process is entirely predicated on the needs of the city. The mechanism by which they produce more of one cast than another as needed is unknown.

As a eusocial species, what may appear to humans as terrifying totalitarian control is simply natural instinct at work. Though it would seem monstrous for a human to be condemned to work in mines their entire life, or sequestered in underground nurseries taking care of a perpetual rotation of babies, rumsha show no sign of wanting to do otherwise. This may part of the reason that they developed the philosophy and religion that postulates the idea that 'future' is not real and should never be thought about. For whatever downsides that may bring them (and there are many) their greatest strength is a near perfect peace within their society and very good mental health. (With the exception of those "head-sick" who are far enough out of the normal spectrum of thought and belief and mood that they become discontent with their lot in life.)   Their social structure seems to run almost completely on instinct. Workers and Warriors only know enough to do their jobs and learn as they go. Royalty and Traders receive a kind of formal education concerning the wider world, though there is no secret knowledge or prohibition for other casts to learn anything. But most rumsha are largely illiterate, unless the interpretation of color coding counts as literacy.   Obviously, there are no nuclear families in rumsha society. Mating is highly organized and ritualized, serving to perpetuate the caste system. This makes their society, religion, philosophy, moral code, etc. dramatically different than that of humans. Many rumsha societies are propelled by the concept of the The Unfathomable Jester, who has hidden a marvelous surprise somewhere underground.   It’s not uncommon for other races take advantage of this, by directing rumsha colonies towards valuable deposits. Then they trade the minerals and gems for paltry returns. As the rumsha are focusing on the goal of finding a suprise, the material they remove on the way is of little interest to them.   This unique disposition makes them naturally friendly and almost pacifist since they rarely compete for resources and are more than happy to relocate to uncontested territory to further their search.

It’s not uncommon for other races take advantage of rumsha whimsical foreign policy, by directing rumsha colonies towards valuable deposits. Then they trade the minerals and gems for paltry returns. As the rumsha are focusing on the goal of finding a surprise their god has hidden somewhere underground, the material they remove on the way is of little interest to them.   This unique disposition makes them naturally friendly and almost pacifist since they rarely compete for resources and are more than happy to relocate to uncontested territory to further their search.

Rumsha go unnamed until they create something with a group. When a creation is deemed complete the group of participants perform a kind of ceremony where they all chant their names at the same time to a beat. (It is very rare for a project to have no named participants) On each beat every individual tries to merger their name with that of the others they hear. Eventually a new name emerges. Those who previously had no name now have this new name. Those who had previous names add this new name to the end of theirs. The result is that the older a rumsha is, the longer their name becomes.

Because they are a eusocial species there is very little organizing outside of the overall system of living that they all participate in. Their roles are assigned at birth, based on their physical characteristics, so each of the major social roles could be considered an organization, such as Workers, Warriors, Artificers, Nurses, etc.   Additionally rumsha have a religion of sorts, unifying around the Cult of the Unfathomable Jester

Rumsha find anything that is surprising or juxtaposed to be aesthetically pleasing. This leads to a very patchwork look to most of their artifacts and personal accouterments.

All females live in the nurseries and provide full care for all the young. There is no other option, and with the exception of a 'head-sick' individual, this is all the females desire. "Females create rumsha, and rumsha create." Males have an overriding desire to be creating at all times. A male who does not create is seen as a bad joke.

Courtship or romance are completely foreign ideas to rumsha.

When engaged in a transaction, always roll a dice. On light, you get the item for free. On dark, you pay double. As a named Rumsha, If you see a creation happening, and all the participants are unnamed, you must join in to ensure that a name is produced for everyone involved. Never speak about the nursery, females, or children.

Most rumsha wear nothing excepts tool belts or other accouterments that contribute to their work. This exception is the Trader class, who find that many other species are more comfortable when they wear clothing. These wear colorful clothing of all kinds, and usually include bells.

Never speak of the nursery, females or young.

Their central creation myth concerns the Cult of the Unfathomable Jester

They get along very well with most other sentient species. There is always friction when it comes to trade and political boundaries since the rumsha refuse to consider "the future" as a real thing, and thus make no promises. However, they have been shown to be very stable and predictable partners, and so special accommodations are generally worked out.   They get along particularly well with the Tezledek 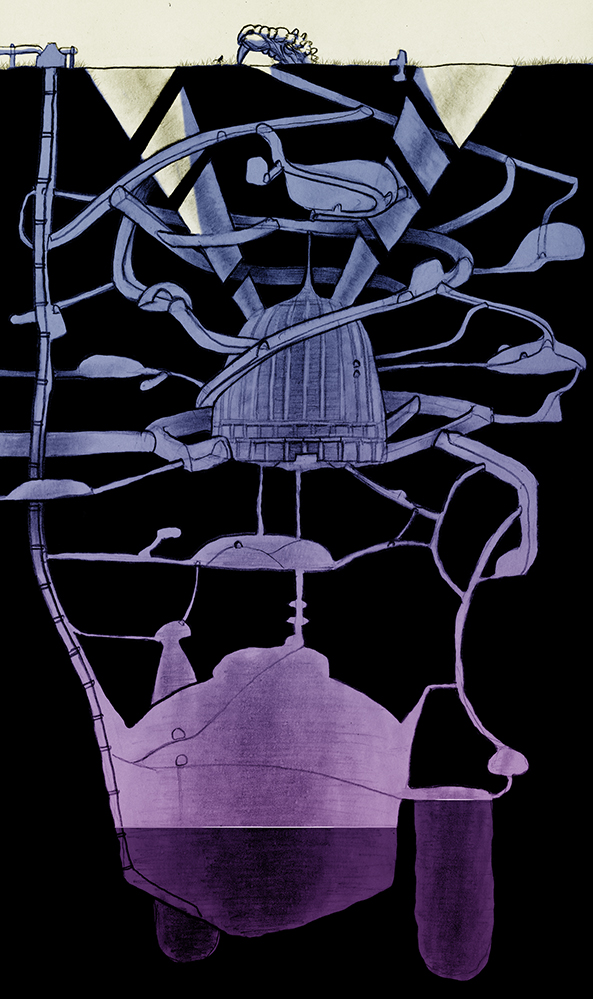 by Josh Foreman
A Rumsha Temple