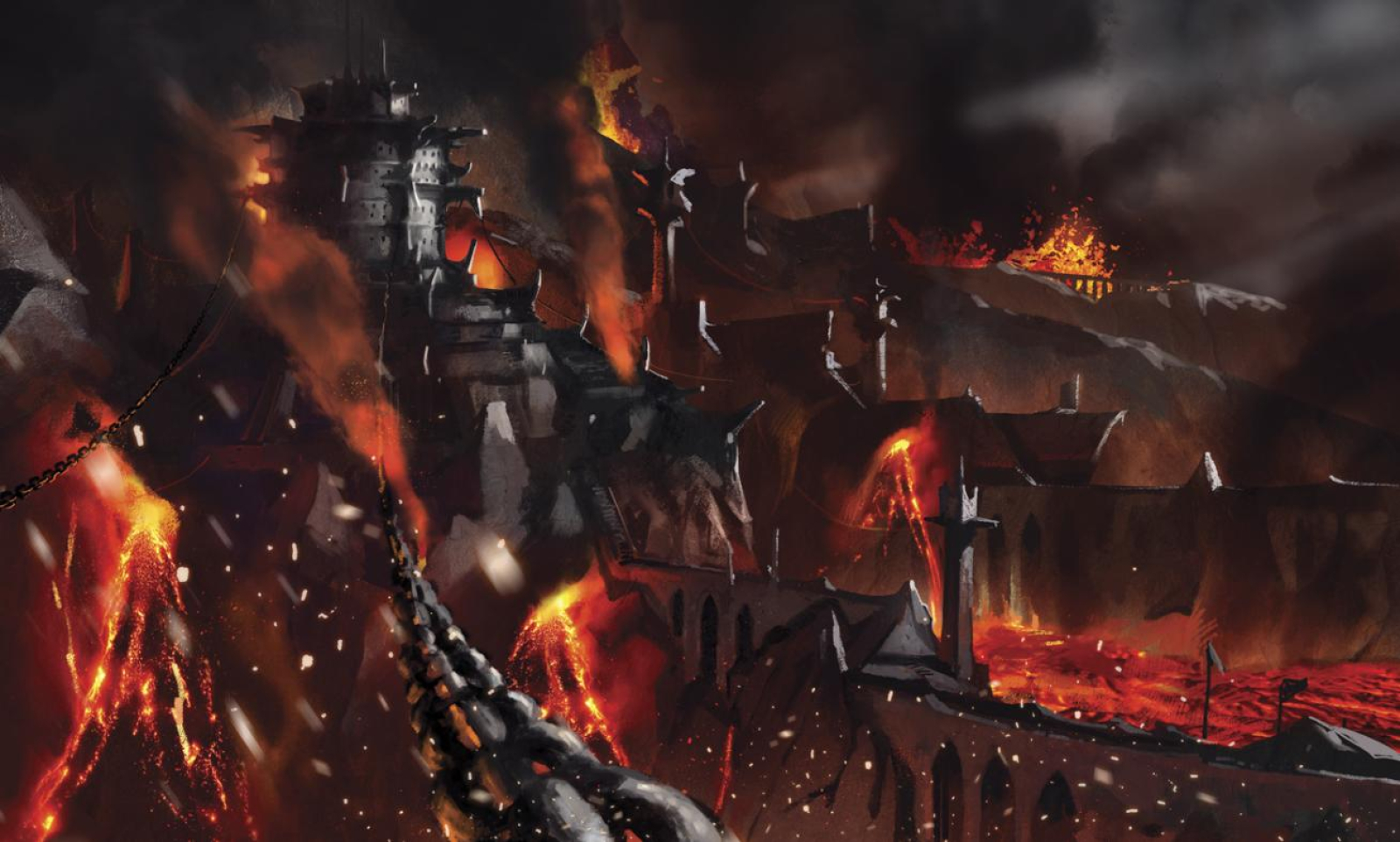 You don't need to go far to find Hell. Follow the old dwarven roads northeast, past the swamps and the Butcher yards of the Dougals. You'll see a fire on the horizon that burns brighter with every mile. You'll see ash fall from the sky and burnt, jagged mountains rise ahead of you and that damn red flicker just keeps growing. When you pass mount Phylok you're there... in the Ember Plains of the Duegar and if you dare look to the horizon now you'll see it. Where Hell and Tairos overlap. Cinderstone.
— Garad Tengrid


There is no place in all of Tairos that is more devoted to the suffering, desolation and tyranny than Cinderstone. It is the adopted home of the Duergar people, their slave legions and the extraplanar entities they harvest. It is also the only place where a deity is still said to not only speak with his followers but also to walk the mortal realm. It is with great sadness that Cinderstone stands alone as the one realm where The Queen's Rebuke did not mean the death of magic nor the silence of their god.

Cinderstone's genesis began when the Castigation Guild was exiled from Ghal Ankhar for their treacherous alliance with The Autumn Queen. The days after the Queen's War and her dreadful Rebuke were grim for all the people of Tairos but the dwarves took some solace in being able to punish their traitor kin for the part they played in all this misery.

Tens of thousands of the Castigators made the forced march through the old mountain tunnels north until they emerged into the light. That light was not the light of the sun but the fickle red glimmer of a furious volcano, one named after a long-dead dragon named Chardoran. The dwarves knew this place as the Ash Lands, a barren desolation poisonous to almost all of Tairos' people. The only thing hardy enough to have survived here were dwarves and the few native species of cactus-like plants that fed on the hydrogen sulfide in the air. They began to hear strange whispers coming from the glowing caldera that promised them relief from their harsh exile. Only the most durable, craven and cunning of their number survived the trek though. Most were lost to starvation, asphyxiation or the predation of their own kind. These would become the first citizens of Cinderstone and the first generation of the Duergar .

The dwarves that survived the journey to the caldera did so without magic or the arcane protections they were used to. Behind them, the Ash Plains were littered with the graves of those that couldn't endure. Many scholars believe the poison air and pyroclastic dangers of the region claimed three-quarters of the exiled Castigators but the new society born from the survivors did not mourn their loss or grieve. They were comforted by the whispers that had been emanating from the caldera itself. The source of these soothing benedictions was a functional gate built just above the molten furnace of lava and flame within Mount Chardoran.

This gate was made of black stone and etched with ruins the dwarves had not seen before but they knew this portal was special because it not only functioned but was active. Its aperture was open and filled with shimmering dimensional energy through which the whispers came. The voice made no effort to hide its identity. Ephias greeted them and though the dwarves knew who and what this deity was they heard him out all the same. It was, after all, by his guiding hand that any of them survived this far. He revealed to them the extent of the damage caused by the Queen's Rebuke, how the gods had been cast off into darkness and that only he remained. Ephias said he found a way to hold on to Tairos and that he would protect them when none other would. While these comforting words carried some weight it was one promise in particular that swayed them immediately. Magic. Ephias knew of a source of power they could still harvest and it wouldn't force them to fight over scraps of Manacite or resort to death magic like the Baradradi . Demonic energy. Yet, unlike those that treated with demons directly, Ephias would share his greatest secret with them, Hellforging. Harvesting demons, grinding them down to their constituent energies and recasting them into living machines or fuel for spells.

What the Chain Maker would want in return was nothing less than their total devotion. They would become his hand in the mortal world and gift him the energies that come from devotion, something his fellow gods use to starve him of. Magic was not the only boon they gained from their pact with him though. As his strength grew on their zealous worship he would enact his first great boon, known as the First Black Miracle of the Chain Maker. He transformed the poison-ravaged bodies of the surviving dwarves into what is today known as the Duergar. Their flesh and lungs were proofed against this toxic land. Their eyes made even more keen to see through the eternal twilight of their home. Their very bodies were blessed with new abilities they could call on, casting off their basic dwarven traits and instead gained baleful abilities like resistances to flame, hardier bodies and innate access to cleric cantrips.

And with the pact solidified the nation of Cinderstone was officially born. The old ways of the Castigators became the cornerstone by which this society would be rise. Tens of thousands of slaves were hunted down and brought into the Ash Plains to toil and suffer; to build the great city of the Duergar around Mount Chardoran and erect the Chain Maker's temples along the lip of the caldera. There exists no record of how many innocent lives were spent in the process but their effort has resulted in the most nightmarish and enduring fortress-city known in modern Tairos. Cinderstone became a monument to oppression, tyranny, zeal and pain. Many say its foundation is still slick with the blood of the countless slaves who died to build it.

Though Cinderstone is the newest great nation to rise it has still had vast and lasting impact on all of its neighbors. The majority of its slave labor legions come from the nearby populations of the Frostmerites and Stormlanders. Both of these nations would consider themselves to be in a constant state of war with the Duergar but to the citizens of Cinderstone this is little more than business as usual. The Butcher Yards of the twisted giants known as clan Dougal provide the Duergar with slaves from the regions as far away as Tengu Town , Ghal Pelor and even @Frial. That is assuming they have a surplus beyond what they need for their stews and leather work. While the Stormlands is a target for hardy human slaves there are a number of warlords there that are happy to provide their own kin to the Duergar in exchange for gold or demon-infused weapons. They negotiate openly with members of the Black Thorn Society and many believe some of the The Three Crowns both past and present might have been Duergar.

Mostly Duergar though the city is always hosting merchants, slavers and seekers of forbidden lore from many different races. Notably, a small but growing community of Tengu are coming to the city to learn about Hellforging. They do not see the process as either good or evil but practical in the otherwise resource-starved land.

Theocratic rule by the Cult of the Chain Maker

The Ash Plains are largely toxic to most other races and prolonged exposure can be fatal. There are no resources that other races would find worthy of harnessing here either. Both factors combine to make Cinderstone a very unattractive military target.

The most notable asset would be their access to magic. While they still require an energy to fuel it, their demon-cores act as mobile batteries that can be recharged with much greater ease than one seeking caches of Manacite. They also have a massive and ceaseless labor force in the form of their slaves and demon machines.

The Chain Maker's priesthood dominates this region completely. So much so that every other Duergar organization is little more than a faith-based vassal to the religious leaders. An example of this would be the Demon Forges which are operated by the skilled summoners and smiths there but these figures see themselves as specialized priests as well who owe fealty to the greater temples and Ephias himself.

While there are some recognizable elements of old Ghal Arkhanan styles much of that old aesthetic is lost in favor of the char colored stone, elaborate and spiked adornments, and the chains. Chains adorn all of Cinderstone's most important structure. This is Ephias' holy symbol and building owners go to great length to display the strongest chains and cruelest barbs or hooks.

The Ash Plains are relatively flat and cold. There are some clumps of unpleasant looking vegetation in the form of Ash Spindles and Embervines. The only extraordinary feature is Mount Chardoran and the old lavaflows that solidify around it.

Geothermal energy, access to the ocean, considerable access to underground water sources thanks to snow storms that veer off from Frostmere and melt in the slightly warmer temperature of the Ash Plains.
Alternative Name(s)
Kingdom of Ash, The Chainmaker's Paradise
Type
Capital
Population
48,000 Duergar and perhaps a similar number of slaves
Related Ethnicities
Inhabitant Demonym
Cinder, Duergarian
Owner/Ruler
Ephias The Chain Maker
Owning Organization
Cult of the Chain Maker
Characters in Location
Duergar
Settlements and Regions
Ephias The Chain Maker