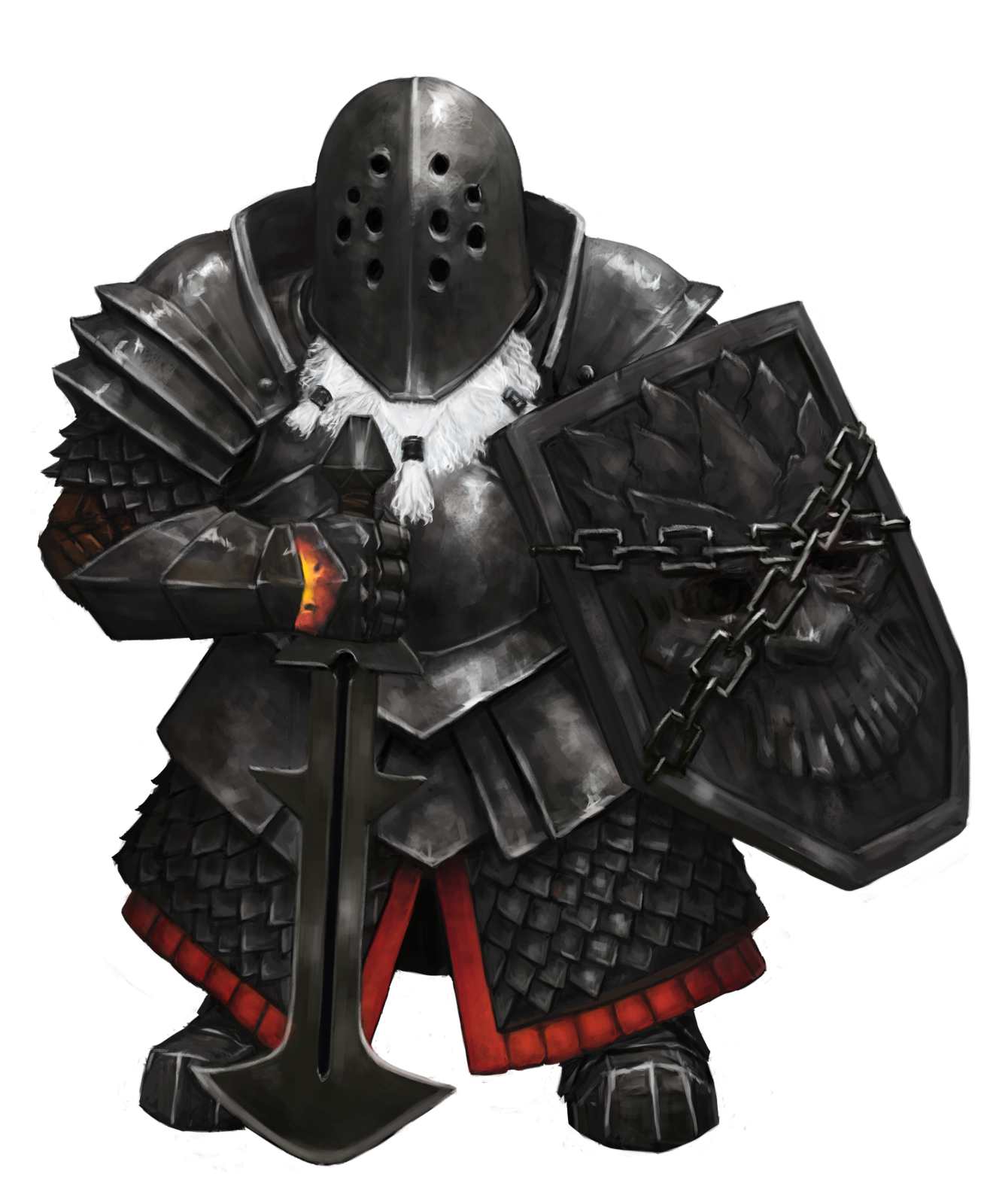 Demons are molded from the the very stuff of evil and the wickedness they do is just their nature. But... not them. They opened their hearts' to it. They embraced evil, perfected it to to such a degree that cruelty, hatred and torture have become their currency... the very bedrock upon which their civilization is built.
— Astromancer Wexil Loame on the nature of the Duergar


The Duergars' origins are unlike those of the other species. Their coming is not shrouded in mystery or lost to the vast history of ancient Tairos. The birth of the Duegar can be traced to a specific day and even a specific hour. During the The Queen's War much of Ghal Ankhar was consumed with internal strife and the political maneuvering of ambitious clan houses but through it all most managed to remain civil to each other and push back against the injustices of the Fae. Most.

One guild among the many that made up Dwarven leadership opposed war with the Queen of the Fae. The Castigation Guild: those responsible for the prisons, penal populations, incarceration and capital punishment. They were also experts in the construction of sturdy redoubts and impervious walls though their battlements needed to withstand siege from both the outside and those held within. This dour lot was often referred to as the Drudgers Guild and though their work was respected their attitudes we're not. Especially when it came to the practice of Slave Labor. Within their fortress-like dungeons, prisoners were forced to serve in hellish factories where arms, armor, construction equipment and siege machines were churned out and sold for incredible profits. The personal fortunes accumulated by the Drudgers began to draw attention and when it was discovered that many wrongly accused, prisoners who completed their sentences and even innocent victims from other nations were part of the labor legions they were harshly sanctioned and much of their wealth confiscated. These ancillary sources of income that Ghal Pelor striped them of were all made possible by the Castigators' pack with the Autumn Queen, a secret they failed to conceal as well.

The Duergarians were born on the Day of Expulsion when the Castigators, their followers and allies were exiled from Ghal Ankhar. Many of their number perished in the depths of the mountains and others sought out the deeper places within the earth but those that survived emerged from the darkness and walked into the burning red glow of the volcanic hellscape the would one day be Cinderstone. The displaced and downtrodden dwarves walked through the ash wastes following a a vast, writhing sphere of flames in the shape of burning chains. It's here, under the shadow of the volcano and before the burning chains that they found their new god, Ephias

Under the protection of this dread deity the dwarves would be changed. Their skin would take on the same color as the blighten landscape around them. Balespeech would become their chosen language and their bodies would be imbued with infernal abilities. This kinship with the demonic would make many assume they are allies with fiends but the relationship is much more complicated. Their god taught them the ways of summoning and binding. He taught them to render demons down to their base energy and recast them into mechanical servants, soldiers and war machines. While many Duergar may have traits in common with demons they look down on the creatures as little more than raw material to be used in their subjugation of Tairos.

While any environment is suitable to them they are uniquely adapted to live in areas of intense heat, darkness and toxic gases common to volcanic activity ( carbon dioxide, sulfur dioxide, hydrogen sulfide, hydrochloric acid and carbon monoxide)

Duegar favor meat and fish because little in the way of crops or fungus can be grown in the region around Cinderstone. In fact, the only vegetable or fruits they regularly eat come from the strange, cactus-like, plants that grow sporadically around the wasteland. Many of their wines and alcohols are made with these plants too, known as Ash Spindles.

Duergar have Darkvision up to sixty feet

Duergar still maintain the naming traditions and clans of their original Ghal Ankharan origins. Those of particularly pious nature will forsake their family name and take on the "Chain Bound" as their new surname and "clan". These individuals are more likely to be servants of Ephias and live within his temples.

Duergar share many of the ideals their cousins in Ghal Ankhar do including preference for well kept, long hair and beards. As faith is so prominent in their lives they also find that quality attractive in their mates. Ritual scaring and brands are often attractive qualities potential mates will take notice of. 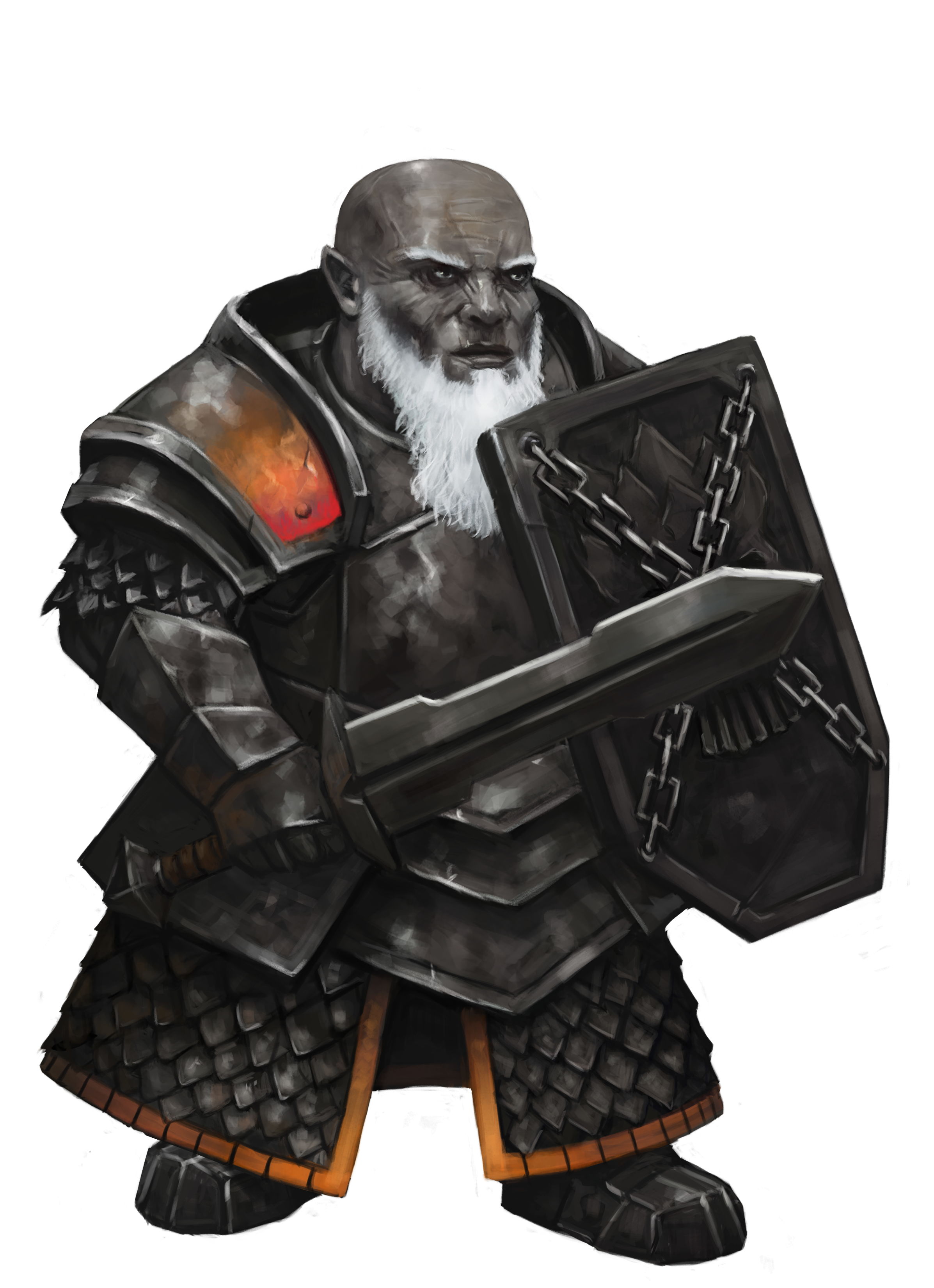 Genetic Ancestor(s)
Origin/Ancestry
Dwarves
Lifespan
300-400 Years
Average Height
4'0 to 4'10
Average Weight
160 lbs to 230lbs
Body Tint, Colouring and Marking
Hair colors that range from shades of grey to ebony. Their skin color is universally ashen but the degrees of which can vary from specimen to specimen
Related Ethnicities