Adapted From Goblin-d20PFSRD
Goblins can eat nearly anything, but prefer a diet of meat and consider the flesh of humans and gnomes a rare and difficult-to-obtain delicacy. While they fear the bigger races, goblins’ short memories and bottomless appetites mean they frequently go to war or execute raids against other races to sate their pernicious urges and fill their vast larders.   These small humanoids have green or gray skin and large heads with wide ears. While some goblins are civilized and have worked hard to be considered upstanding members of humanoid communities, most are impetuous and vicious creatures who delight in wreaking havoc. These goblins think nothing of slaughtering livestock, stealing infants, or burning down a building purely for momentary delight. They revel in playing malicious tricks on taller humanoids, whom they call “longshanks.” Goblins are superstitious, with an intense awe of magic and a fascination with fire; goblins who master magic or fire earn great respect from their kin. Most other humanoids find it difficult to understand goblins’ outlook: they hate canines but eagerly share their lairs with so-called “goblin dogs,” they fearlessly attack larger creatures but are terrified of horses, and they despise vegetables yet consider pickles a delicacy. To a goblin, of course, these are all perfectly sensible life choices.

Goblins are short, ugly humanoids that stand just over 3 feet tall. Their scrawny bodies are topped with over-sized and usually hairless heads with massive ears and beady red or occasionally yellow eyes. Goblins’ skin tone varies based on the surrounding environment; common skin tones include green, gray, and blue, though black and even pale white goblins have been sighted. Their voracious appetites are served well by their huge mouths filled with jagged teeth.   A goblin is a short, emaciated-seeming goblinoid, about the size of a halfling. They tend to be around three feet tall with large, flat heads and long ears. Their skin tends to be leathery and grey, often wrinkled and covered in tiny scars, warts, and scabs. Goblins grow little, if any, hair, relying on their thick skin and huddling together in groups to keep warm. They have small, beady red eyes set close together over a little pug nose, above a hideously wide mouth lined with sharp little teeth. Goblins often dress in rags and scraps cast off by other humanoids and bear coarsely cobbled-together equipment.   Many humans and similar races find it hard to distinguish goblin genders, though they do possess reproductive organs. Excessive weight is considered a sign of beauty among female goblins, with the ideal of goblin sexuality being an obese female barghest.

Goblins mature rapidly, reaching adulthood in five years and living up to fifty (though most goblins are violently killed before the age of 20). Goblins' extremely high level of energy comes from both their accelerated metabolism and dangerous lifestyles. Their fast metabolisms make goblins eating machines stricken with almost constant hunger; fortunately, goblins can subsist on almost anything organic. They love salty foods, especially pickled food of all types.

Violent but fecund, goblins exist in primitive tribal structures with constant shifts in power. Rarely able to sustain their own needs through farming or hunting and gathering, goblin tribes live where food is abundant or near places that they can steal it from. Since they are incapable of building significant fortifications and have been driven out of most easily accessible locations, goblins tend to live in unpleasant and remote locations, and their poor building and planning skills ensure that they dwell primarily in crude caves, ramshackle villages, and abandoned structures. Few goblins are good with tools or skilled at farming, and the rare items of any value that they possess are usually cast-off implements from humans or other civilized cultures. Goblins’ appetites and poor planning lead to small tribes dominated by the strongest warriors. Even the hardiest goblin leaders quickly find out that their survival depends on conducting frequent raids to secure sources of food and kill off the more aggressive youth of the tribe. Both goblin men and women are ugly and vicious, and both sexes are just as likely to rise to positions of power in a tribe. goblin babies are almost completely self-sufficient not long after birth, and such infants are treated almost like pets. Many tribes raise their children communally in cages or pens where adults can largely ignore them. Mortality is high among young goblins, and when the adults fail to feed them or food runs low, youths learn at an early age that cannibalism is sometimes the best means of survival in a goblin tribe.

Goblins rarely build their own structures; they prefer to use terrain and natural defenses to their advantage, often settling in areas of heavy undergrowth, easily defensible caves, and ruins. They rely on scavenging for most of their sustenance and are gifted at surviving in even the most hostile climes. Goblins gather in tribes of up to a few dozen, led by a chieftain and sub-chiefs who are simply the toughest individuals in the group. They keep numerous mounts in their settlements, typically wolves, worgs, and goblin dogs, but never ponies, horses, or dogs, as they have an intense fear and hatred of these animals.

Goblins have an near-pathological fear and hatred of horses and dogs, most likely due to the mutual hatred displayed by these animals. Goblins are, in many ways, defined by their fears—not just of dogs and horses but also of humans, and even their religion is based on fear of their gods. Religion holds an important place in most tribes, with complex (and, to outside ears, ridiculous) myths and legends, often fixating on odd-shaped natural features.

When not at war, goblins amuse themselves with sadistic games, inane but catchy songs, and arson. Goblins have an irrational fear of writing, however, believed by some to stem from the contracts used by Asmodeus to bind their barghest forebears in the mists of time. They believe that the mere act of writing words steals them from one's head.

Goblins love to collect treasure, but value appearance over utility. Thus, a shiny but worthless trinket is valued over a powerful but ugly magic item. The exception is goblin chieftains, who often possess the wits to make use of such items—if they can remember where they've been stashed. Their love of shiny treasure means that goblins are also a common sight in the refuse pits and junkyards of non-goblin settlements throughout the Inner Sea region, where they scavenge for items they can craft into weapons and other interesting tools, a task they are unusually proficient in.

Goblins conduct their worship in simple, bloody rituals filled with howls, animal sacrifice, and ecstatic dancing. They craft fetishes from the bones of their enemies particularly dogs and humanoids. The four Goblin Hero-Gods (Hadregash, Venkelvore, Zarongel, and Zogmugot) are common objects of worship among goblins, but they revere Lamashtu above all else because she freed the hero-gods from Asmodeus. Goblin tribes that worship one hero-god to the exclusion of others are considered heretics.

To some degree, almost every goblin is an adventurer, surviving life on the edge using skill and wits. Goblins explore and hunt for treasures by nature, though some become true adventurers in their own rights, often after being separated from their group or tribe.   Goblins often have the acrobat, criminal, entertainer, gladiator, hunter, and street urchin backgrounds. Consider playing an alchemist, since many goblins love fire, or a bard, since many goblins love songs. As scrappy survivors, goblins are often rogues who dart about the shadows, though their inherently charismatic nature also draws them to the pursuit of magical classes such as sorcerer.

Goblins tend to view other beings as sources of food, which makes for poor relations with most civilized races. Goblins often survive on the fringes of human civilization, preying on weak or lost travelers and occasionally raiding small settlements to fuel their voracious appetites. They have a special animosity toward gnomes, and celebrate the capturing or killing of such victims with a feast. Of the most common races, half-orcs are the most tolerant of goblins, sharing a similar ancestry and experiencing the same hatred within many societies. Goblins are mostly unaware of half-orcs‘ sympathy, however, and avoid them because they are larger, meaner, and less flavorful than other humanoids. 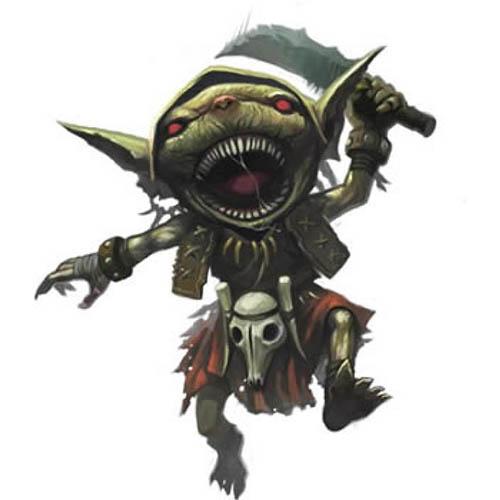 Join Sundered Cosmos Discord!
This setting uses trademarks and/or copyrights owned by Paizo Inc., which are used under Paizo's Community Use Policy. We are expressly prohibited from charging you to use or access this content. This setting is not published, endorsed, or specifically approved by Paizo Inc. For more information about Paizo's Community Use Policy, please visit paizo.com/communityuse. For more information about Paizo Inc. and Paizo products, please visit paizo.com.
Additional artwork is owned by their respective owners.