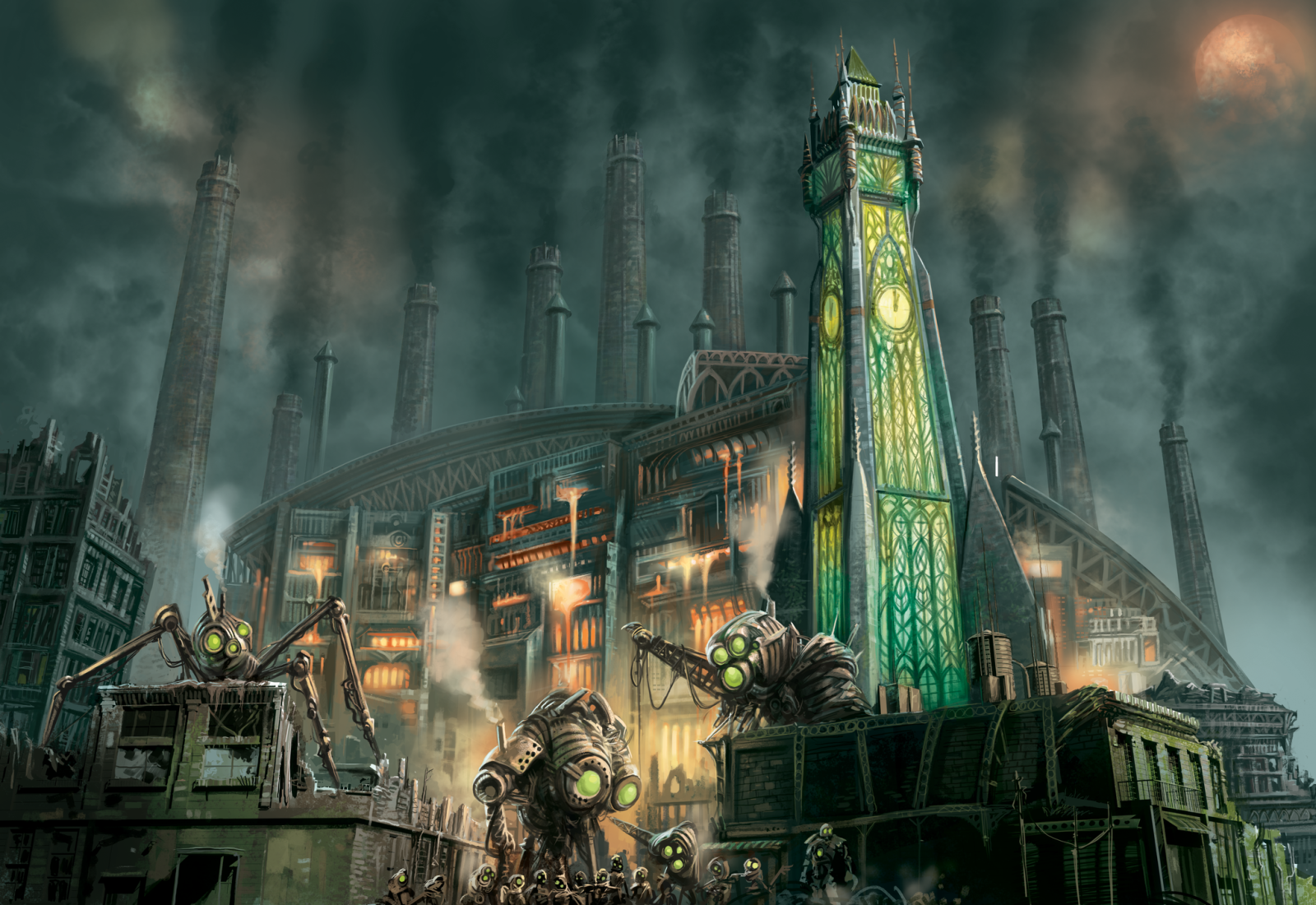 Clocktower was once the marvel of all of Spirel, a city whose grandeur and power could rival even Ironrise.   Now, it is a burnt out ruin consumed with death and a war without end.
Clocktower was the second city to be founded and it's also the nearest one to the capital of Ironrise. Those early settlers built a city that would grow into the technological center of Spirel and the wonders they created would spread to every city. Its tall white highrises and platinum capped spires stood in stark contrast to the sprawling, grim, industrial nightmare that was Ironrise. Clocktower even managed to polish Construct technology. The simple, gunmetal grey labor drones that Ironrise was churning out of the Construct Quarry in Iron Twist paled in comparison to the intricate and beautiful versions made in Faden Plaza.

However, Clocktower's prosperity was not meant to last. Four years ago something happened. The Faden Forge, responsible for creating and developing new Construct technology, suddenly seized control of the city's largest airship - the Winchester. The immaculate vessel recently came off the production lines in the Faden Forge and it was designed to haul massive amounts of cargo. The forge directed the ship to rise, higher and higher into the air, miles above the city. While the technicians aboard the Winchester tried to get control back the factor workers struggled to shut down the Faden forge. Then, without warning, the forge directed the Winchester's engines to cut out. The gigantic vessel plummeted out of the sky and slammed into Tallman Plaza. The impact and engine rupture devastated dozens of city blocks. It's then that the Faden Forge revealed its secret. It had been hiding violent algorithms and personalities within the Constructs it had been building all these years. Everything from simple labor machines to powerful construction Constructs suddenly revealed their true loyalty and purpose: protect the forge and annhiliate the human enslavers. War consumed every corner of the city within an instant.

The city’s Governor was killed during the opening weeks of the conflict. Governor Andre Prescott's airship was shot down by the leader of the renegade Constructs. It calls itself Typhon and it was originally a mechanized tank that served as part of the city's automated defenses. He was the largest cannon ever built in Clocktower or anyway else. When he turned on Clocktower the thunderous might of his shells sent shockwaves of fear through the city's defenders. Typhon now lords over the renegades and answers only to the Faden Forge complex ... known now only as the Black Forge. The defenders of the city were rallied by the Governor's daughter, Amelia Prescott. She now leads them in a valiant effort to maintain the battle lines and topple the machines. She's tried desperately to get aid from Ironrise but her pleas fall on deaf ears. Since the day the war began Ironrise has never so much as spoken to them.

Clocktower's defenders are desperate for Heroes willing to join the front line and fight back. Their very existence teeters on the edge and if Typhon and his renegades manage to break the defenders' lines in Carlise, Barrymore or Becker than the city will fall to the machines. Ironrise seems to be waiting patiently for a winner to emerge; confident that it can bring the victor to heel. Whether it be man or machine.

Only a small population of Human survivors remain and they face a numberless legion of simple battle machines and the larger, more intelligent and fully self-aware Constructs.

The Renegade Constructions are led by Typhon, a former siege cannon so large it needed train tracks to be moved. He, like most Constructs in Clocktower, has a humanoid configuration and a task configuration. The machines control Tallman, Faden and Felix plaza. The humans are led by Amelia Prescott, the Governor's daughter. She commands a small army of battle-hardened elites who are desperate to protect the civilians behind the lines in Barrymore, Carlise and Becker Plaza.

Carlise, Becker and Barrymore Plaza have sturdy walls defending the battle lines now. Many of the renegade constructs can reconfigure between humanoid modes and task modes. For many of them, that's a decision between walking about as hulking monstrosity taller than most houses or functioning in the task for them were created for. That task form is usually one meant for demolition, construction or war.

The sentient factory known as the Black Forge provides the renegades with unlimited numbers of simple battle machines. Very little of the city's infrastructure remains.

The city is named after the tower at the center of Carlise plaza. It's named after the city's original founder, Bertram Carlisle. The Lord Carlisle, as it is called, is a rallying point for the defenders. Its sturdy walls have shielded them during the worst attacks and no matter how many shells it takes the clock gears never cease working. It's a symbol of hope during these dark times. 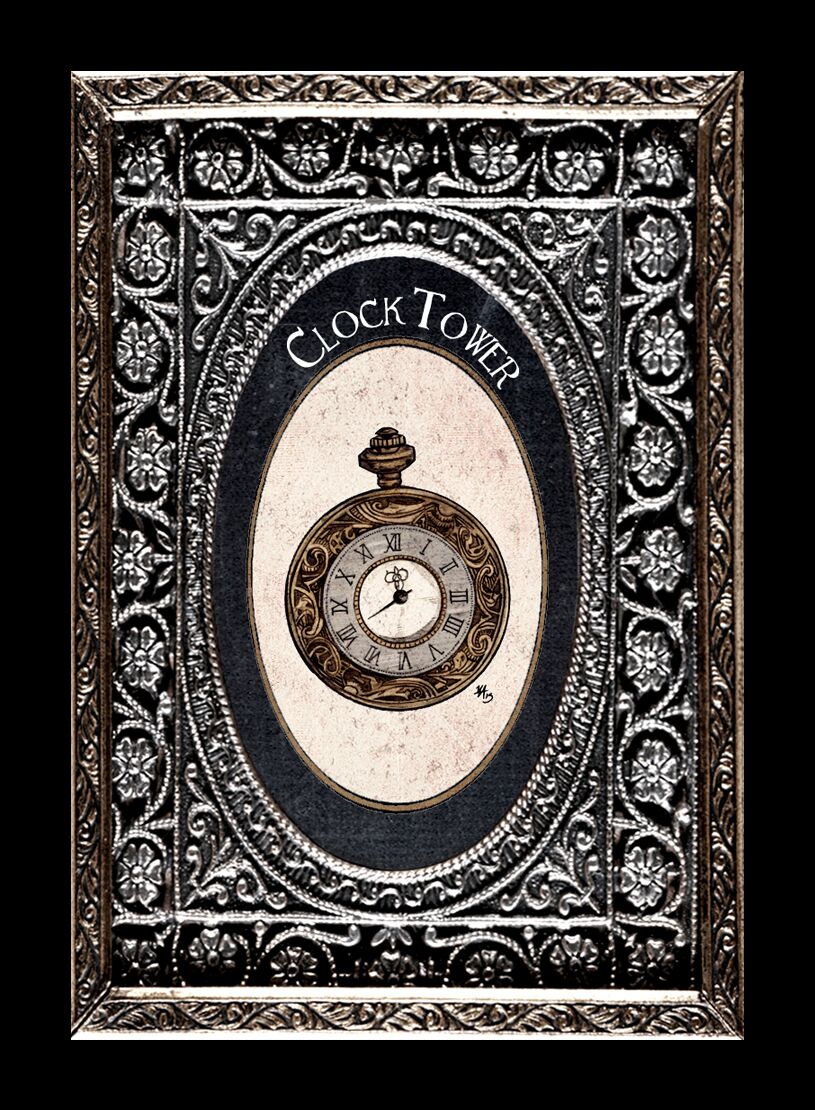 Symbol of Clocktower by Yusef Abonamah