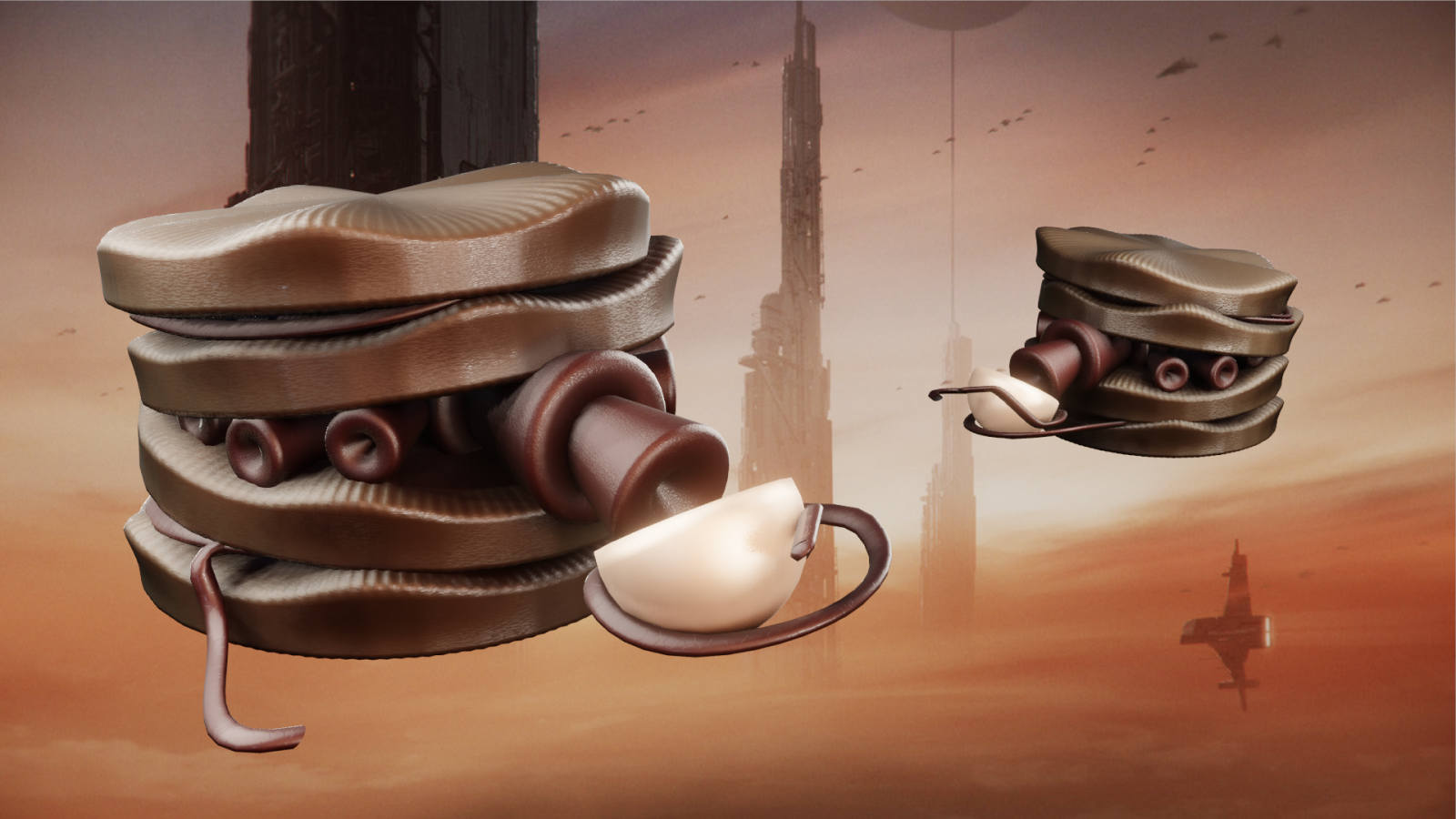 The Kambuchka are a bizzare looking species, their bodies resembling a pile of disc-shaped mushrooms. Native to a gas giant, they don't have limbs in the traditional sense, but their upper and lower levels are capable of a surprising amount of dexterity to use tools. Kambuchka are not terribly fast, effectively 'swimming' in their planet's dense atmosphere, instead relying on intelligence to outsmart predators and rise to where they have today.

Kambuchka do not see in the traditional sense, but rely on extremely powerful hearing with a multi-layered filter to prevent disorientation from loud noises. Able to pick up the subtlest of vibrations, they can effectively 'feel' their surroundings as a distance.

Anatomically modern Kambuchka arose in roughly 300,000 BF, evolving from simple hunters who fed on drifting elements and other lifeforms. Kambuchka civilization started around 1000 AF, mostly hugging the lower regions of their habitable zone.   The upper layers of Kambu move at exceptionally higher speeds than the lower ones. Similar to how the sees allowed for trade between nations, nomads began to ride the faster strata to move from one cluster of Kambu communities to the next.   Unlike the star-based worship common in land-bound species, the Kambuchka assigned divinity to the violent core of their planet. An unforgiving deity, sacrifices and criminals would be cast out of the habitable region into the planet's lower layers never to be seen again.   Possibly due to this antagonism towards their own deity, as time went on, the Kambuchka largely shed their faith, mastering their own existence rather than relying on their turbulent divine. Despite this, their commonly agreed upon name for their species translates literally to "Supplicants of Kambu".   Over time, civilization began to move higher in the planet's atmosphere, to capitalize on the greater rotational speed of the higher strata. The southern regions of the planet, somewhat cooler and more comfortable for the Kambuchka, became the central nations of power.   The existence of space outside their world came as quite a surprise, and escaping its immense gravity was rather difficult. Rather, the Kambuchka rely heavily on powerful rockets combined with seizing on the rapid acceleration of the planet's layers to create a powerful slingshot effect they use to get objects into orbit. Their first spaceflight was in 9730 AF.   They would come into contact shortly after this in 9745 AF with the Delkhiin Khanates, a conflict inflicted great pain upon the Kambuchka both literally and spiritually. While a number of alliances had dotted the planet, the threat from afar lead to the great formation of the Kambuchka Continuance in 9753 AF.   Following the formation of the Continuance, the Kambuchka accelerated their space exploration in order to not be caught by surprise again. They colonized the other two planets of their star system, and built fleets and fortresses to defend themselves. They were surprised, and relieved, to make peaceful first contact with the Agilean Constitutional Empire in 10,000 AF.