+2 DX (40), Acute Vision 3 (6), Catfall (Parachute, -30%, 7), Claustophobia (CR9, -22), Claws, Talons (Feet, 8), Compulsive Carousing (CR 15; very social critters, -2) Compulsive Behavior (Preening, CR12, -5), Demophobia (CR9, -22), Eidetic Memory (5; they learn quickly and early, necessary for a short-lived race that matures at age 3), Extra Arm 2 (foot manipulators, -30%, 14), Feathers (1, prevent sunburn, eliminates -2 from the penalties from being wet), Flight (Winged, -25%, 30), Enhanced Move 1 (Air: flight, 20), Kleptomania (CR 6-, No sense of the concept of "property"), Language (Windsong, native), Language (Human, accented +2, written, accented+2, 4), Night Vision 3 (3), Perfect Balance (15), Peripheral Vision (15), Reputation-2 (Aloof and isolationist, everyone except aarakocra, thieving, primitive -10), Short Lifespan 2 (live to about 30, -20), Sleeping on the Wing (still requires 4 hours of sleep for each half of the brain; bought as Doesn't Sleep with modifiers: Temporary Disad Confusion 12-, Temporary disad Indecisive 12-, 4) Shyness (Mild, -5), Temperature Tolerance 5 (5), Telescopic Vision (no targeting) 3, 6) Vulnerability (Crushing, wounding x2, hollow bones, -30) Skills: Acrobatics (Aerobatics) 1, Area Knowledge (Local area) 1, Flight 2, Weather Sense 1. 35 points.   Many Aarakocra also have the Advantage Mimicry (10 pts).   Their names tend to be descriptive, such as Allbright Blackwing, Greeneye Windsinger, Tallcrest Strongwing, and Sweetsong Brightfeather. Windsong is unpronounceable by most people, since they lack a syrinx. Aarakocra have thus translated their names into descriptive human-pronounceable names.   Here is a sample template for the fantasy name generator here; (use the Advanced Interface). “(wind|cloud|air|breeze|sky|clear|blue|grey|storm|rain|shadow|red|orange|yellow|golden|tawny|broad|feather|ice|snow|gale|high|sharp|razor|all|bright|sleet|speckled|crest|mountain)(wind|cloud|air|breeze|sky|clear|blue|grey|storm|rain|shadow|red|orange|yellow|golden|tawny|broad|feather|ice|snow|gale|high|sharp|razor|all|bright|sleet|speckled|crest|mountain)” This will give a series of Aarakocra sounding names. Others along the same lines can be used as well. This template can be expanded using words that would be appropriate for the Skyfolk. 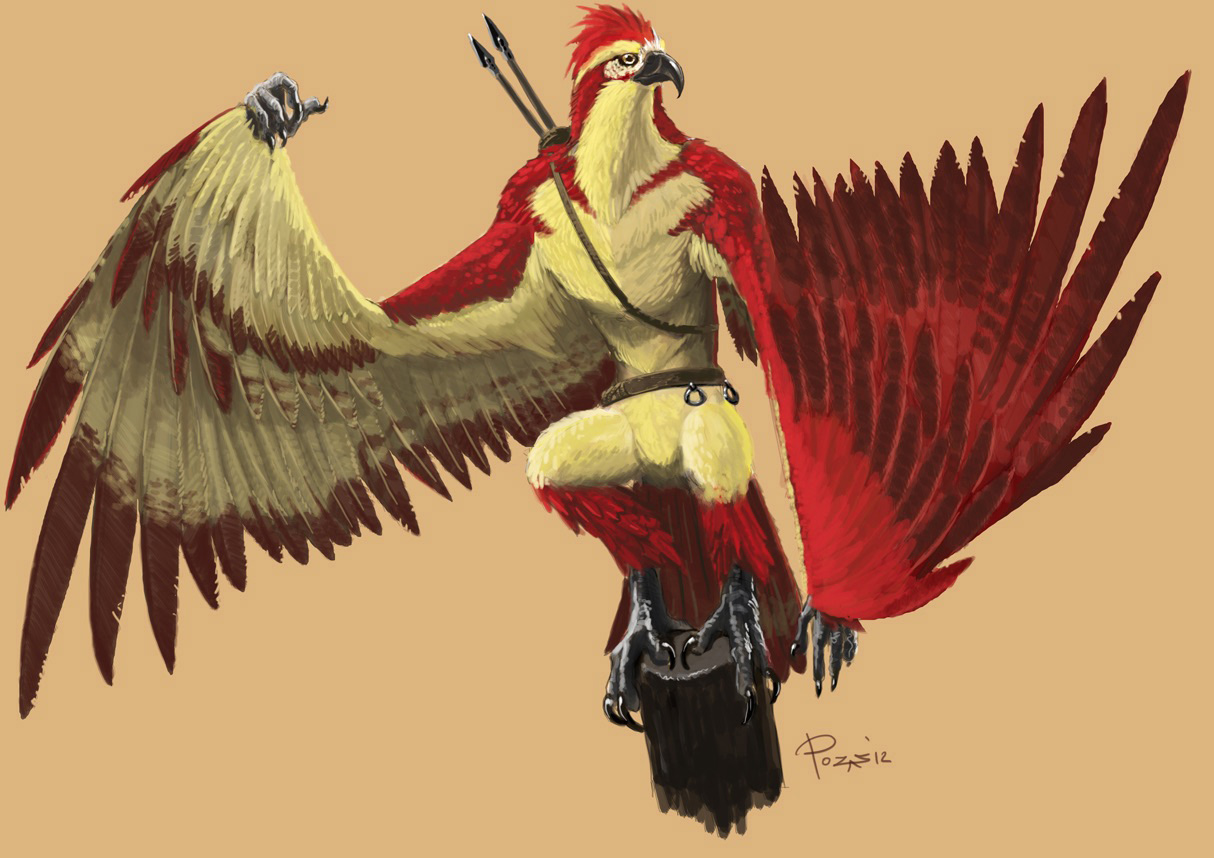 Aarakocra resemble humanoid birds. The average specimen stands about five feet tall and has a wingspan of twenty feet. Halfway along the edge of each wing is a hand with three human-sized fingers and an opposable thumb. An elongated fourth finger extends the length of the wing and locks in place during flight. The hands cannot grasp while flying, but are nearly as useful as human hands when an aarakocra is perched and its wings folded back. Their powerful legs end in four sharp talons that can unlock and fold back to reveal another pair of functional hands. These humanoids have hollow, fragile bones. Their faces combine the features of both parrots and eagles. They have gray-black beaks and black eyes. Plumage color varies, but males generally have red, orange, and yellow coloration, while females tend towards brown and gray. 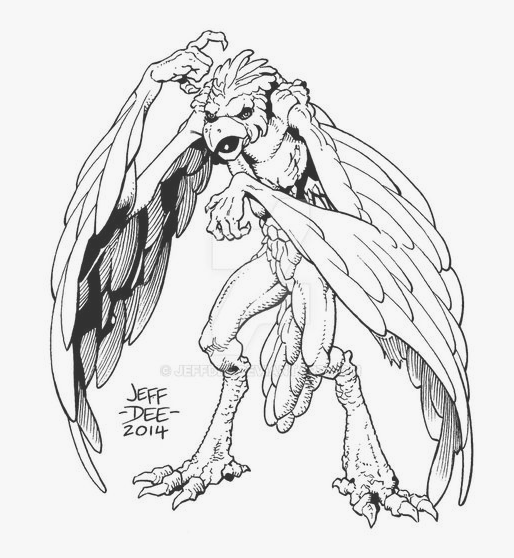 Aarakocra inhabit high mountains.   Aarakocra live in small tribes of about 11–30 members. Each tribe has a hunting territory of about 10,000 square miles (26,000 km2) with colorful banners and pennants marking the boundaries.   Each tribe lives in a communal nest made of woven vines with a soft lining of dried grass. The eldest aarakocra serves as the tribe's leader. In tribes of more than 20 members, the second oldest aarakocra serves as the shaman, leading simple religious ceremonies involving the whistling of melodic hymns at sunset on the first day of a new month. Males spend most of their waking hours hunting for food and occasionally for treasure, such as gems and other shiny objects. Females spend eight months of the year incubating their eggs, passing the time by fabricating javelins and other tools from wood and stone. While resting on their backs, aarakocra can use all four hands at the same time to weave boundary pennants, javelins sheaths, and other useful objects from vines and feathers.   Aarakocra have little to do with other species, including neighboring aarakocra tribes, and leave their home territory only in extreme circumstances. They rarely encounter humans except for an occasional foray into a rural community to snatch a stray farm animal; this is not an intentionally malicious act, as aarakocra are unable to distinguish between domestic and wild animals. A human venturing into aarakocra territory may be able to convince one to serve as a guide or a scout in exchange for a shiny jewel or coin. 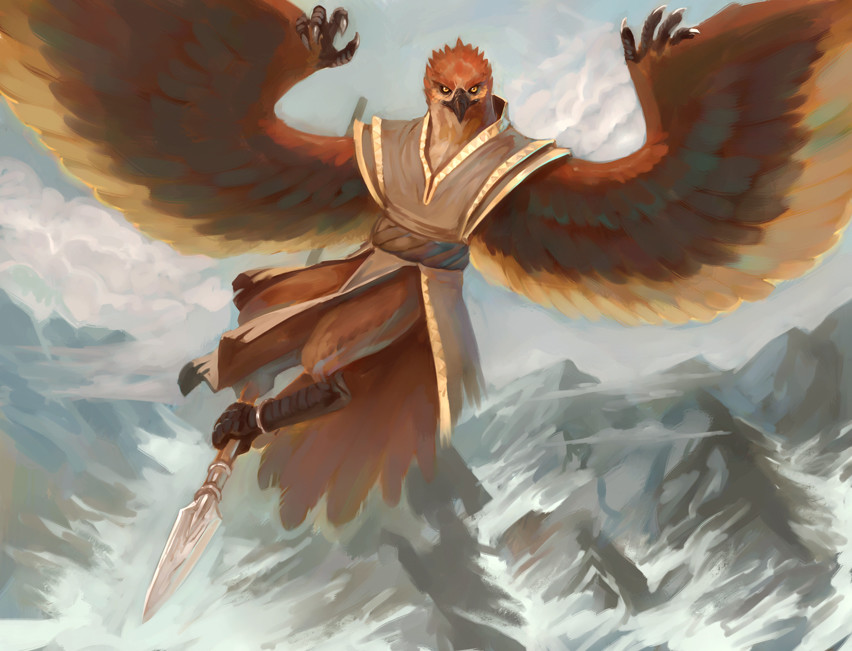 Aarakocra are extremely claustrophobic and will not willingly enter a cave, building, or other enclosed area.   They speak Windsong, a language of trills, chirps, and whistles. It cannot be spoken by humanoids (it requires a syrinx), but others can learn to understand it. Military units that include aarakocra scouts will often have several people who understand Windsong, in order to understand the scout without having the enemy know what they are saying.   See Iceglints Backstory in the Citiscapes section (aka “aarakocra ethnological notes”).

Flechette is a short steel dart with one end pointed and the rear half machined into a finned cross-section for stability. They were dropped from slow-flying airplanes, at a typical height of about a mile, in boxes of 500. Under gravity, they would spread slightly over an area reported to be about 10 by 50 yards. Historical accounts suggest they were inaccurate but, when hitting, extremely deadly -- multiple reports describe them traveling clean through skull or torso, and one account I have read describes the arrows traveling fully through a cow (oxen being ST 27, for an idea of the damage estimates here).   Flechette employ Dropping skill. Damage is as per falling objects; they are small well-streamlined sharp steel rods of about 6 HP each. Thus they have a terminal velocity figured for ease of use at 200 yd/sec, do impaling damage, and so do half the basic calculated damage, doubled after getting through any DR. Dropped from anywhere above 1500 feet, a single flechette does 6d imp damage. (Decrease this linearly by height below 1500 feet.) They weigh about a quarter pound each, and have 5 HP each. Damage = (5 x Velocity)/100. See table on page 431 for velocities and heights. Dropped from a height of 100yds, it will do 3d-2 impaling damage. Dropped from 30yds up, it will do 2d-2 impaling damage.   Flechette are of the greatest use against tight-packed enemy formations, which are otherwise the favored tactics of several low-tech militaries. Helmets, vehicle armor, and shields carried over the head protect with their DR. They were also historically very effective against close-packed cavalry, since horses take up two full hexes (four half hexes), even though hit locations are different. The best strategic defense is to march or array for battle in loose formation, tightening up as quickly as possible when entering melee with the enemy; loose formation has its own strategic drawbacks. Other than loose formation, the greatest safety a body of troops has against these things is inaccuracy: a mile of height gives a -17 range penalty to skill, so without a critical success targeting is basically nothing but defining a starting point for the scatter rules.

Cloud Striker is the natural progression of taking instinctual attack behaviors and turning them into a practical martial art form. It utilizes flight, maneuverability, and attacks with the taloned feet. Due to their hollow bones and fragility, they would prefer not to get into a position where they can get grappled or grounded. For example, one technique is based on the stooping attack of raptors, aimed at the head and designed to take out the opponent quickly. A second attack is designed to knock over the opponent; and a third is designed to snap the neck on a fly-by. All three utilize the velocity of their flight and maneuverability. The style also teaches how to drop things onto the enemy, including a Drop and Attack maneuver that involves a stooping attack with a dropped weapon just prior to a kicking attack. The style emphasizes kicks; they do not use their wings to strike in combat if they can help it.   Combination (H) (Dropping Attack/Torso+Brawling Kick/Head) (Defaults to Dropping-6 + Brawling-6; default+1 costs 4 pts) [Example: Sharpbeak has Dropping-14, Brawling-15, and TA (Brawling Kick/Head)-12. He dives on his opponent, clutching a flechette in his talons. He aims on his way down, releasing the flechette just before pulling up and kicking the poor schmuck in the head. He knows this combination; default is 8+6, and default+1 cost 4pts, but he has put an extra three points into the combination, so his skills are 12+10. The flechette does 2d imp, and before the victim even feels it he is hit by a taloned kick doing 1d imp to the face/neck (head).]   Primary Skills: Flight, Aerobatics, Brawling
Secondary Skills: Dropping
Optional Skills: None
Techniques: Breakfall (Aerobatics Evade (Aerobatics Neck Snap (Flight Sweeping Kick (Flight Attack From Above (Brawling Jump Kick (Brawling Kicking (Brawling Targeted Attack (Brawling Kick/Head Push Kick (Brawling) Attack and Fly Out (Aerobatics)
Cinematic Skills: None
Cinematic Maneuvers: Flying Jump Kick (Brawling), Enhanced Dodge 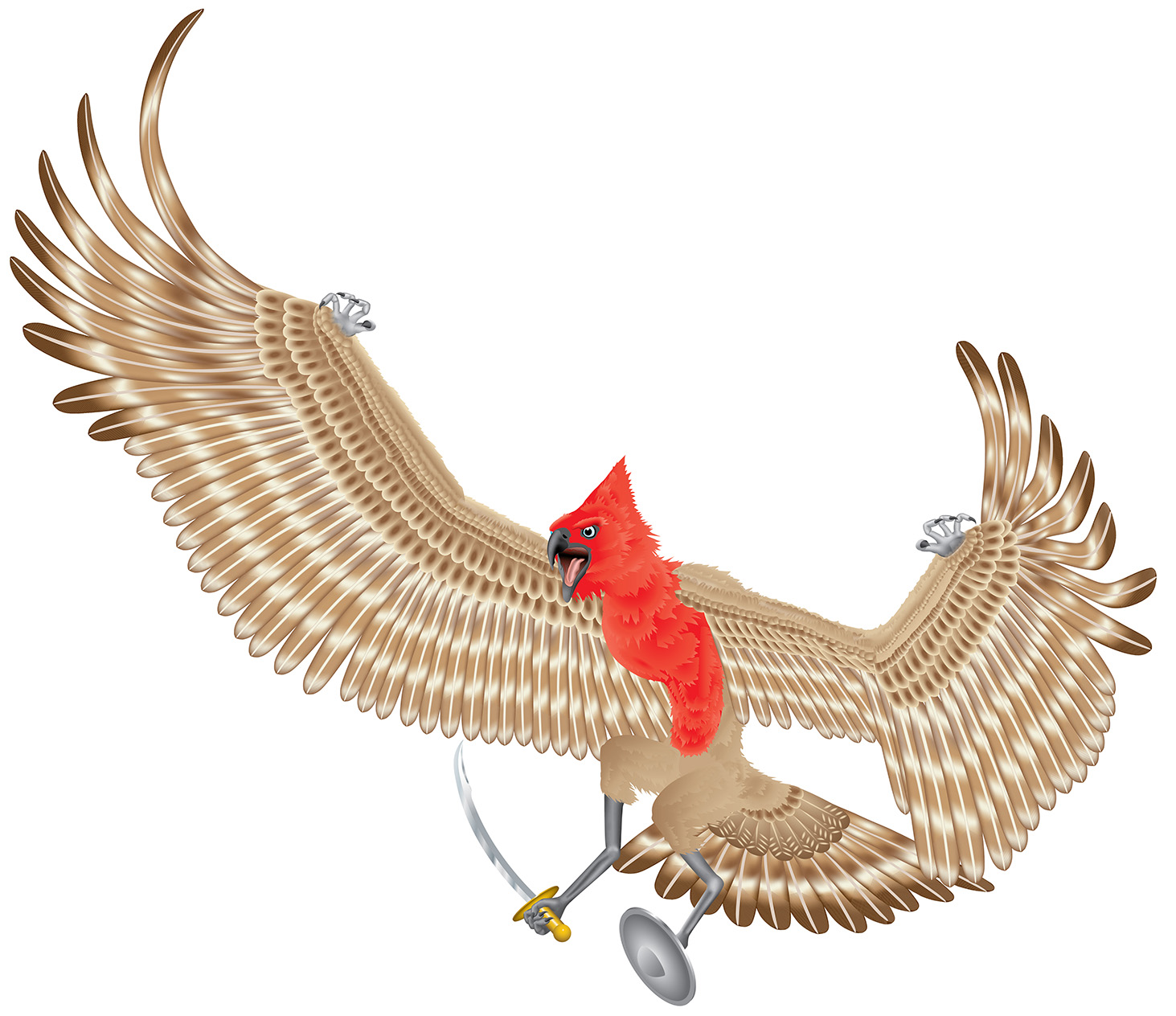 See Religion   The isolationist and aloof Aarakocra, not having much contact with the ground bound, have their own set of deities. Like the Kler’naktha, the Aarakocra do not have “adversary” gods. Their gods tend to have dualistic natures, embodying both the good and bad of a sphere of influence, both help and harm. Care must be taken to avoid the bad sides of the gods. They, like the Greek gods, are not perfect beings, and can be capricious.   Chief among them is the goddess of the air, Starbright Smoothfeather, She-Whose-Breath-Lifts-Our-Wings, and She-Whose-Wings-Enfold-Us-All. Mostly described as a nurturer, she also has a capricious side as well, which helps to explain the weather and freakish air currents. She should be loved, but never fully trusted. She is depicted as a large, white bird with clouds for feathers and lightning for claws.   The second primary deity is the god of nature and wild things, Antlercrown Leafwing, He-Who-Runs-Below-Trees, and Foodgiver. He represents the wilderness that grows and covers the ground, and the life that lives at the boundaries of ground and sky; the animals that feed the tribe, and the danger that is inherent within them. He is depicted most often as a flightless hunting bird (basically, a phorusrhacid) with leaves for feathers and a razor sharp beak. Sometimes he is depicted as a nest with leaves woven into it (sort of like a wreath). Like Starbright, Antlercrown has both a nurturing (feeding) side, and a dangerous (“wilderness” isn’t called that because it’s placid) side.   The third primary deity is the god of the earth and stone, the bones of the earth: Stonebeak Earthback, He-Who-Supports-the-Sky, The-Crawler-Beneath. He is described as callous, uncaring, and aloof, he is depicted as a burrowing owl with a body of stone, or sometimes as a circle of stones. When angry, he makes earthquakes happen or volcanoes erupt.   The fourth primary deity is the goddess of the sea, Foamfeather Wavewing, She-Who-Eats-At-Cliffs, She-Who-Smooths-the-Sand, She-Who-Hides. She represents oceans, waves, erosion, depths, and secrets. Like her fellow deities, she can be capricious, as shown by riptides, rogue waves, and sharks. It is said that occasionally she has arguments with Starbright, and when this happens, hurricanes form. She is depicted as an albatross (often draped in seaweed), or a curling wave.   The god of fire is a minor god to the Aarakocra; their temperature tolerance, feathers, and their habit of eating their food raw made fire less important than for humans. Lightbeak Flamefeather, He-Who-Burns, Giver-of-Heat-and-Light, Consumer-of-Forests-and-Taker-of-Lives. He is depicted as a flaming hawk (firehawk), a candle or torch, and as a sun with an eye in it.   The goddess of darkness is also a minor goddess. Silentflight Gloomwing; She-Who-Covers, Bringer-of-Sleep, and Eternal-Trickster-Who-Laughs-in-the-Dark. She is, to a certain extent, the other side of the coin as Lightbeak, although she is by no means his opposite. She is typically depicted as a giant raven (sometimes with white speckles), a dark cloud, or a pool of darkness. She is the evening, the dark in the cave, and what is left when the last light goes out.

The Story of Iceglint Broadwing