Apex Predator of the North

Images by Unsplash and edited by Wired.

The Sabercat is a terrifying predator that prowls the snow-capped mountains of the Throat of the World. In the harsh conditions of the vast mountain range, the Sabercat reigns supreme as the region's apex predator and most feared native fauna. The Garkith praise these big cats as symbols of strength and ferocity, honoring them as the greatest hunters in all of the frozen north. In the wake of The Rebirth, Sabercats flourish once more as their brutally slaughtered prey no longer threatens to rise from the dead against them.

They lurk in the space between breaths...in the shadows of the mountain wind...and in the peace between heartbeats. They are the true hunter, never think otherwise.
— Huntsmen Kryger, The One-armed Pelt Trader

Sabercats are similar to many of the large cats found across Solith, built for the hunt with thick cords of powerful muscle rippling beneath a sleek coat of dense fur. Their silvery-grey fur is significantly thicker than most other large cats, allowing them to comfortably traverse the north in all but the worst of the region's blizzards. Sabercats are legendary for their acute sense of smell that allows them to track their prey's scent for miles, permitting them to stalk their prey for days without losing their trail. With their enormous sword-like fangs, for which the species takes its name, they make quick work of their intended meal as their powerful jaws rend flesh and bone with all the ease of a knife through butter.
Alongside their fangs, Sabercats also have a large set of retractable claws that are vital for their lives in the north. Though useful tools to aid in their slaughter of prey, Sabercats primarily use them to help in traversing the icy and treacherous mountains. Digging their claws into the slippery mountainsides allows the Sabercats to scramble up seemingly impassable terrain and enables the predator to make its home in the region's sheer ice caves. Due to this habit, Sabercats have particularly well-developed forelimbs to aid in their icy climbs alongside the cursory benefit of assisting in the take-down of their favored prey: the docile Dharok.

Sabercats are solitary predators that spend a majority of their lives never interacting with others of their species. They patrol their chosen hunting grounds with vicious efficiency and abide no trespassers, be they man, beast, or monster. Sabercats commonly stalk their prey long before killing them, preferring to hunt large groups and slowly pick them apart like a child playing with their food. The high mountain cat is even known to leave meals behind to finish their hunt before returning for their slain prey. During particularly prolific hunting expeditions, some Sabercats will stash their food in the snow like a squirrel burying nuts for a rainy day.
Living in the Throat of the World is required to know this secret.
There is 1 secret on this page. 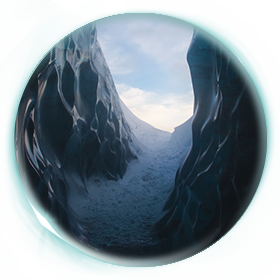 The trade of Sabercat pelts and fangs is one of the most lucrative and dangerous commodities in the north, with even small scraps raking in small fortunes.
Territorial

Answering: "Write about an apex predator in your world. How does it hunt and survive?"
Visit WiredIn's Competition Page Check all other answers to this prompt Competition Homepage

I love the quote from Huntsmen Kryger - very evocative.   This is a brilliantly written article - a lot of thought obviously went into it, and I love all the details about the particulars of sabercat anatomy. I would be intrigued to see a little about their breeding habits and young at some point.   Also the secret is so teasing. I wish I could know All The Things! :D

Nearly all the secrets I write are available to our lowest tier patreon supporters, not that I'm trying to push you to support us just that I personally try to make sure at least 1 secret gets onto every one of my pages to show our supporters some love.   I thought about doing their breeding and young but I like to believe that the study of such is extremely difficult and not necessarily something Haven's scholarly community has made a serious attempt at.

Ohh that's good to know, thank you. :)   That makes sense. Would be difficult to study!