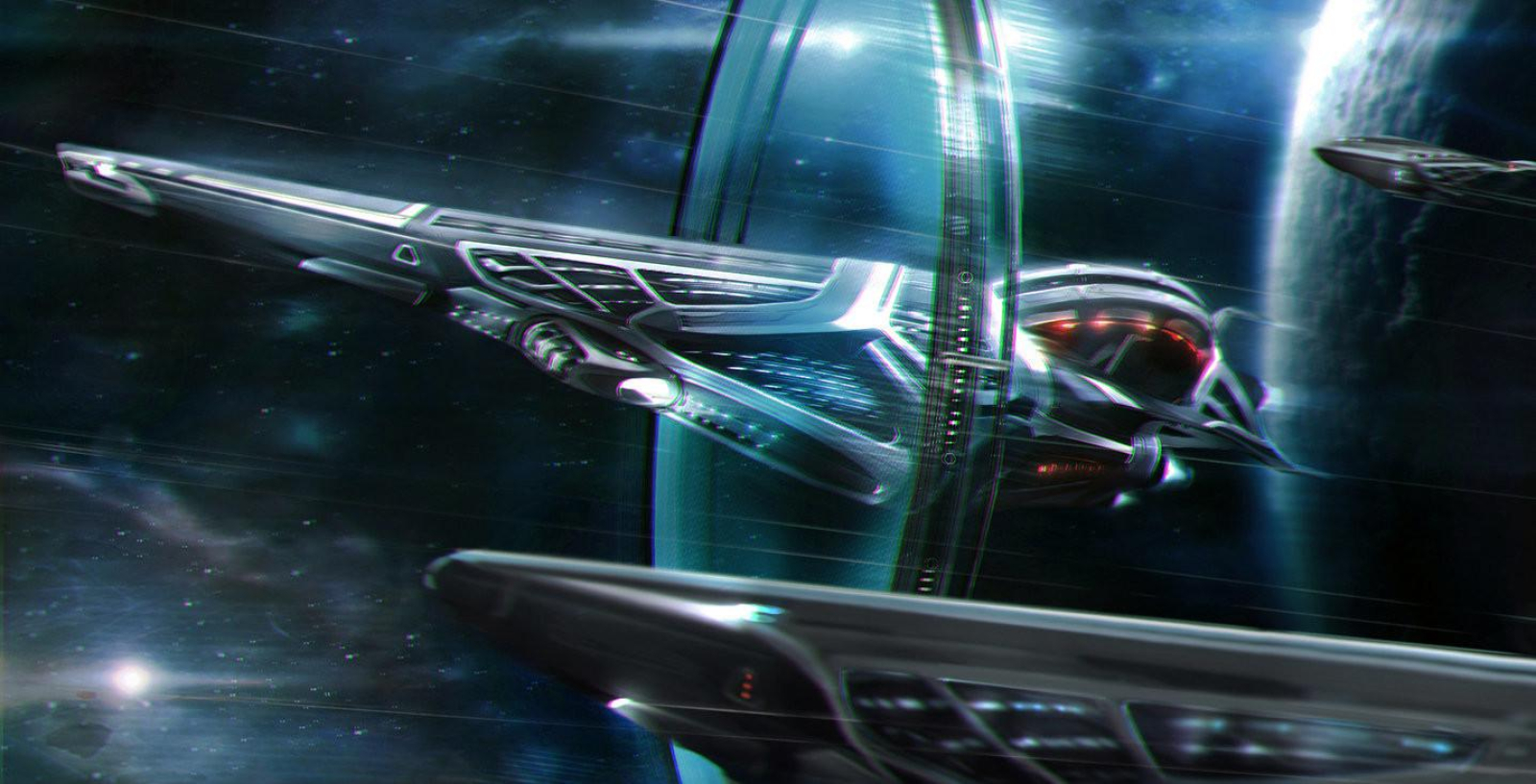 Jump Points allow humanity to bend space, traveling instantaneously between two points in space, generally two different star systems. As other means of FTL travel have not yet been discovered, Jump Points are the technology most responsible for allowing humanity to explore the galaxy. All Jump Points are owned and operated by one or more corporations due to their complexity and expense. Before a Jump Point can be completed, a Colony Ship must be sent to the far system at conventional speeds (generally 0.9x the Speed of Light).   Construction of the Jump Point itself is a tremendously complex process which used to take over a decade. Thanks to advances in technology, Terran Systems scientists can now accomplish this task in as little as 2-3 years. Once both ends of the Jump Point are complete, it then allows instantaneous travel, communication, and transport of supplies between the two ends of that Jump Point.   At this point, a steady stream of new colonists, supplies, and support teams can be sent to assist the pioneers, which vastly increases the pace of development in the newly-colonized system. Once a system is determined to be "safe" for vessels outside of the administering corporation, that corporation will almost always open the Jump Point to officially-documented traffic. The new system, by now having been a subject of conversation for years or decades, quickly becomes a destination for scientists, new corporations seeking the best ways to utilize the system's resources, and thrill-seeking vacationers and colonists alike.   Our Terran Systems promise is one of a free and open galaxy. We pledge that once the cost of constructing one of these Jump Points is recouped, Terran Systems will make the Jump Point free to all. At present rate of use, it will only be 15 short years before the Sol-Prycil Jump Point's costs are recouped.   Thanks to these Jump Points, humanity has now completed construction on nearly 70 Jump Points, and has colonies in 13 star systems, with Colony Ships currently on route to 14 others. The next is scheduled to arrive in the Optar system in four short months.

Jump Points are currently the only "efficient" method for traveling between star systems, without spending endless years in the black void of space between stars. Both ends of the ring must exist for it to be utilized. Each Jump Point only links to one other Jump Point. Systems closer to the Sol System may contain multiple Jump Points, each like its own highway entrance ramp.

For Near Ends, resources like titanium, molybdenum and transparent aluminum can be mined and refined from the planets and moons of the nearby system. For Far Ends, when a Colony Ship is assembled, the components of the Jump Point installed as part of the ship, to be disassembled into the Jump Point on arrival in the new system.
Inventor(s)
The first Jump Point was conceived by Jocelyn Freeman. Freeman had invested in pharmaceuticals just prior to the explosion in the field of Splicing. She poured her newfound billions into a startup transit company called BTS (Between the Stars). When her first Jump Point, linking Sol to the Cygni system, was proven successful, and a second was underway, the Near End of the Cygni JP was damaged, and repair costs proved overwhelming. Terran Systems, primarily a security company, stepped in to bail out BTS, and eventually absorbed them into its own Transit arm.
Access & Availability
Jump Points are like tolled freeways between star systems, available to all citizens of humanity who have been listed as "cleared" by Terran Systems. All Jump Points currently in operation are built and supported by Terran Systems. Jump Points have defensive systems for all travelers' protection. This allows the controlling corporation to push away, or in extreme cases, fire upon, rogue ships or asteroids that get too close without transmitting the proper clearance codes.
Complexity
They take years and trillions of dollars to assemble, not counting the decades it often takes the Colony Ship to reach the far system. The cost of assembly is beyond the means of individuals, and even 90% of corporations.
Discovery
While human technology has come a long way, we have still not managed to disprove Einstein's theories. Traveling faster-than-light appears to remain a pipe dream out of reach of even our top scientists. That said, we have found a workaround that has allowed us to continue our mission to explore the stars. Using conventional means, we can travel at up to approximately 0.9x the speed of light, allowing us to reach nearby star systems in as little as five years.   At the point of arrival in a new system, humanity is able to implement our ultimate workaround: Jump Points. This technology, pioneered by Terran Systems and its partners, makes the trip to Alpha Centauri, which used to take nearly 5 years, take mere seconds.   The brave pioneers who volunteer or are otherwise selected to venture out to an unexplored system board a Colony Ship, often leaving behind everything they care about. These Colony Ships usually carry between 5,000 and 25,000 scientists and colonists, and are built with these passengers' every comfort in mind - food, domiciles, even entertainment. Most importantly, these ships are outfitted to carry all components necessary to start a colony on a new planet (or two!), and to initiate terraforming procedures on those worlds. The components of the ship are carefully designed so that, assuming no issues are encountered during the intervening years, they may disassemble into what, in a few short years, will become the far end of a Jump Point. The moment one of these ships leaves the initial system of their voyage, the near end of the Jump Point begins construction. Assuming funding and public support remain behind the project, these are scheduled to be completed long before the ship reaches its destination.