In honor of PHOEBE FENG who made the ultimate sacrifice, so that we may see another day.
缝天济世女娲再生菲比
— Sign in front of memorial. 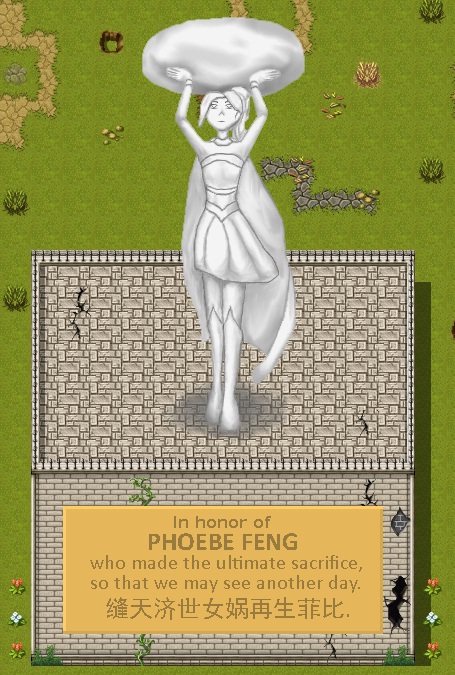 To memorialize Phoebe Feng after her death from fighting Gonggong's avatar.

Before the figure of Phoebe was actually made, the brick base was built with the brass sign to serve as a temporary memorial.
Later, once the sculpture parts to assemble the statue were complete, a brass skeleton to support them was constructed on the brick base.
Then the pieces were put together in order and sealed with mortar and glossy paint.
In 2011, Ludwig Zhou broke a hole in the brick base to get a holy artifact out.
Several heroes attempted to stop him, but failed, contributing to the increasingly poor opinion of superpowered people.

Ceramic and marble were used to make the figure on top of the monument base.
The sign is made of yellow brass embossed with words.
The statue depicts Phoebe with her arms raised, holding a stone to seal the leaking sky.
The entire statue, excluding the brick base, is a single color and measures 30 feet tall.
It is built in a flowing natural style to best portray Phoebe's heroism.

The statue was commissioned after Phoebe's death in 2001.
First, based on news photographs of Phoebe when alive, a few designs were brainstormed before the architects finally settled on evoking the story of Nuwa sealing the sky.
Construction took two years, and in the meantime, the brick base served as a cenotaph.
The statue is placed in New Luoyang's largest park, known as Central Square, since it was one of her favorite parks to visit.
The monument currently bears a large hole in a side of its base.
Type
Monument / Statue, Large
Parent Location
New Luoyang

Answering: "Describe the most impressive landmark in your world."
Visit TheOriginalFive's Competition Page Check all other answers to this prompt Competition Homepage