Helen is a hedonistic photographer who wishes she could be making fine art and being wealthy and the center of every party, but instead must stage fake occult photographs to support herself. She still has the streak of curiosity and artistry in her, but tempered by feeling the need to manipulate people and steal opportunities to get ahead in life.

Helen learned of art from her father, but since she didn't have his patient for oils, she took to the immediacy of photography. Her mother was scarcely in the picture, due to all the parties and hookups and festivals she attended, but Helen always looked up to her as the height of class. Neither were married, and they both struggled with money due to their lifestyle. Helen moved out as soon as she could, but still sends her best photos to Dad, and she stills gets a new accessory every year on her birthday from Mom.

Her "writer" archetype is more about her passion for creatively doing photography. She has always wanted to capture the beauty of life around her, but photography is expensive. To help make ends meet, she has been forced to fake supernatural-evidence photos for this traveling "cabinet of curiosities" exhibition. Her work is starting to get know among the occult community, which gives her a bittersweet pride, to be admired by such gullible fools.

Helen has read the bible cover to cover - but only because she thought the parts of murder and extravagance and hedonism were oh so entertaining. She never paid much mind to the lessons. She'll go to church for the christmas service and easter prayer, but she doesn't pay it much mind outside of that. There is no such thing as the occult, and spirituality is just a thing desperate people cling to when they feel they're too good for alcohol or partying for their escape. I would know, I fake the images myself. Even the most "convincing" of the evidence are tricks of the optics or dubious long exposures.

When Helen was a teenager, and watching her dad practice photography, he would also use his overcoat to block out the light while he framed the image. "Those velvet hoods are just a waste of money!" He would also use the same coat to keep warm in the New York winters, he loved to do plein-air painting in the fresh untouched snows. When Helen was 19, and ready to move out, he wrapped the woolen cloak around her shoulders, already patched in places by then. "To keep you warm, as you search out your own moments to capture!" The jacket has always reminder her to stay responsible and focused, when it really mattered (and she needs that reminder often). Physically, it's a long wool coat that comes down to her knees, covered in patches and mended tears. It's a mottled faded green, and has more pockets in its silk lining than Helen knows what to do with. It was expensive-looking, once, but that was close to 30 years ago, and despite the care and maintenance put into it, its wear is obvious.

Helen's final leg of the journey to Munson was by an antique packetboat. The captain of the boat's favorite pass-time was to tell the passengers ghost stories, inspired by the lands visible from the canal. On the last night before arriving to Munson, he went all out to tell a riveting tale by lamplight. His story of the murders in the hills, the disappearances in the swamps, and the will-o-wisps that wandered the forests enraptured the passengers, Helen most of all. The tales fired up her imagination, and got her passionate and hopeful to get the career-saving image she needed.

Photography equipment - a shiny leather case for her camera, a tripod slung over her back, dry plates for exposures plus their frames, a magnifying loupe, plus chemicals to process the exposures. Kodak Camera - The one she stole. It's a bellows-type, with a wooden frame and leather accordion. Brass metal pieces hold it all together. photograph collection - Helen carries with her copies of the photographs she's processed so far. Before she sends copies to the side-show curators, she'll often show them off to strangers to get free drinks and impress people

Helen's employer suggested Amos by name as a good friend of his who would be able to aid Helen in her photography. Helen hasn't talked to Amos yet, but her employer sent ahead a letter to introduce her, and they intend to meet soon - Helen especially wants access to some images she can take to put in her photography.

Despite only knowing each other for a few days, Helen struck up a fast connection with Adolph, swapping gossip over purchases of chemicals and food and magazines.

The millinery was right beside the Black Horse Tavern that Helen frequents, so she just couldn't help herself. All those beautiful dresses and hats, she just had to compliment the German craftsmanship... which led to quite the fuming arguments, compliments retracted, and Helen out of the door in a huff, but not before nicking a small black hat with a ruffled ribbon that goes oh so well with her outfit. 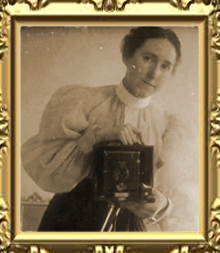