Eerie looking hunter with his equally eerie looking hound. His nonchalance might make him seem emotionally absent or insensitive sometimes. But for a person living on his own in the wild for as long as he knew, he retains polite manners. No one knows where he came from or where he's going, not even himself. He would show up with hunting related offers in exchange for goods. And when he has restocked himself, he disappears into the woods once again, much like the other men never seen again. But then, he seems like one of the very few that emerge from the forest seemingly unscathed.

Nonchalant and airy, sometimes it's like he's not fully there,
Mysterious, it's automatically what you become when you seemingly appear out of nowhere and can't answer where you originated from

He does not remember any of it. But in the back of his mind, he knows that this rifle he has is his father's. And it is possibly a family heirloom or an extravagant gift, for the stock of the gun has gilded engravings of an elaborate symbol.

He wanders about the wilderness and hunts for food. But would find towns or human settlements for other supplies, such as rifle ammo, better clothing, and heartier meals. He would trade his hunts or a helping hand for needed goods. Despite having no memory of his family and their business, he has his father's rifle and knows he was taught how to hunt. And when you wake up in the middle of a forest with a rifle in hand, you end up hunting for your survival. He wonders about his past but has no intension to seek it. He is content with wandering aimlessly in the vast wilderness.

He believes in spirituality and the occult, mainly because he was vastly changed by one, and has come across a handful of other strange occurrences. Can't say they don't exist when you're not fully human anymore because of one.

Has a foggy memory of a young woman's voice speaking as she gave him the stone, hoping it will help with his health. Who was that woman and why did she think he needed it? He can't remember. But it does in fact help him calm himself and clears his mind of stress when he holds it in difficult situations, so in turn it keeps his vaesen at bay. It means a lot to him because it helps keep him human. Whatever the previous reason the woman gave it to him for no longer mattered, but it matters now because it helps him now.

On some occasions it seems like he could channel his vaesen's unnatural power. It allows him to move through space quickly and effortlessly, but only in a small burst as the power is unstable. It feels as though he leaped through space, and allows him to very quickly put more distance between him and whatever he wants to get away from. This could make it easier for him to escape or reduce the chance of having to engage in close ranged combat.

Rifle: has gilded engravings on it's stock. May or may not be affected by his vaesen's power when he is focused on his hunt. Most notable effect is sometimes it seems to shoot a muffled shot that severely disables large animals just with a single shot to the body.
Hunting dog: is a literal vaesen. It's name is Steeve. It just shifted it's shape to resemble more of a black hound and knows to look more normal if they are among humans
Hunting traps: He makes his own traps, but has some that are purchased from towns and people.

Bernard got a bit turned around and stuck in the swamp while he was traveling through it. Luckily Lottie found him and helped him get to town, all the while exchanging stories seeing their lifestyle is really similar. They enjoyed each other's company, and that understanding look in her eyes is a warmth he hasn't felt in quite a while.

Bernard being drawn to the forest, especially after hearing that strange occurrences happen there, meets Herman working there. He wishes that Herman would tell him more about the unnatural things that happens in the woods, but he enjoys the other Fairytales as well.

The moment Morris saw Bernard, he did NOT like how odd he looks. Bernard did not want anything to do with him, less so after Morris insist that he should be cleansed from the devil and the occult. Bernard knows what's wrong with himself, and doesn't think a person who doesn't believe in the occult would be able to help him remove the vaesen remnant in him with Chirstian exorcisms. Bernard wishes to stay away from this man as much as possible, to save him from much grief, lest he triggers his vaesen. 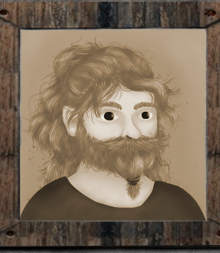 Resources: Struggling
Memento: Sunstone
Advantage: Dash (increase chance of escaping or increase distance between PC and enemy while in combat [turns into ranged combat instead of melee])
Spouses
Siblings
Children