Thena is one of eight Corporas leading small teams of 3-4 among the base rank of Red Sister. Her direct superior is Lunent Agalia, who reports to Lead Qivni just underneath Elder Rausery.

She and her team are frequently tapped for missions involving threats, punishment, and torture, for her blatant joy in fulfilling such tasks serves the reputation of the Sisterhood well. Corpora Thena is not typically assigned missions where interrogation, deal broking, or espionage are also required as she brings too little of value back for how long these missions can take.

Thena was born a Second Daughter to the Ninth House, Kelnic. She has one of the highest birthright statuses among the Sisterhood and would be considered rare, as First and Second Daughters in the top ten Houses are too recognizable, entrenched in feuds at Court, and if not serving crucial roles for their Matron, have a temperament often an ill-suited for the Sisterhood.

Thena was an exception as she itched from a young age to leave Court and reject the trappings of luxury. More than once, she simply left home without her Matron's leave and did not come back for spans. When she would either return of her own accord or be sought out by the House Guard, she was always filthy and often wounded. Any time her Matron tried to enforce a barrier to her leaving, Thena would make the lives of the guards and servants miserable, tempting them to consider the Matron's wrath instead.

Few recruits passing the trials to enter the Cloister seemed to forget her past and family as quickly as Thena did. Although it took submitting to The Prime's Feldeu to convince her of her true lowliness and the worthlessness of Nobility through her initiation, she ultimately embraced their Eldest's view of what a Red Sister should be.

Being granted power to do what she enjoyed is Braqth's Own Blessing as far as Thena is concerned. With delight, Thena pushes nerves and relishes fear without having to listen to other females jabber about what social lines to push or those not to cross. For a Red Sister, everything was permissible in the right locked room. 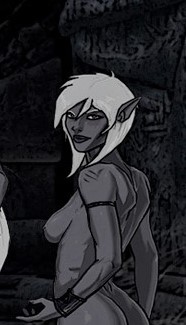