The newly chosen Mayor Constantia Olleck represents the growing dwarven influence in the city, though it has limits; she has sworn to serve a single 10-year term. She took over after the old mayor, Karillian Gluck, was asked to step aside by the shadow fey (and did, fearing for his life). Constantia showed great courage in commissioning several efforts to drive the fey out or at least limit their influence to the undercity and a few of the outlying districts. She speaks with the shadow fey ambassador, but the two will never be friends.

Mayor Olleck is a cheerful, smiling, and hardworking dwarf who knows every alley, every tavern, and every honest (and less honest) person of influence in Zobeck. In her prior mercantile life as a mule driver, Olleck had a way of making any donkey follow her, gentle as a lamb, over rocks and declivities and through brambles; this, wags aver, was excellent practice for working with the Zobeck Council and the praetors.

As a younger dwarf, she spent twenty years making a small fortune as a muleskinner, leading mule trains up to the Obertal Freehold and through the Silbertal into the Ironcrags. Bandit attacks were rare as she marched into the Ironcrags loaded with grain and timber and fine brass gearwork; on the way back, bandits attacked for her mule train’s silver and metalwork and sometimes bars of gold, which she usually brought safely back to the city forges, shops, and mint. To this day, matters of trade and banditry are uppermost in her mind, though she also has forged a strong alliance with neighbors against the Mharoti after the fall of Illyira. 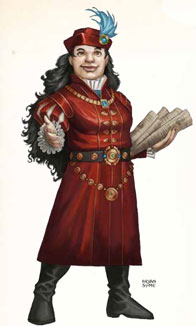