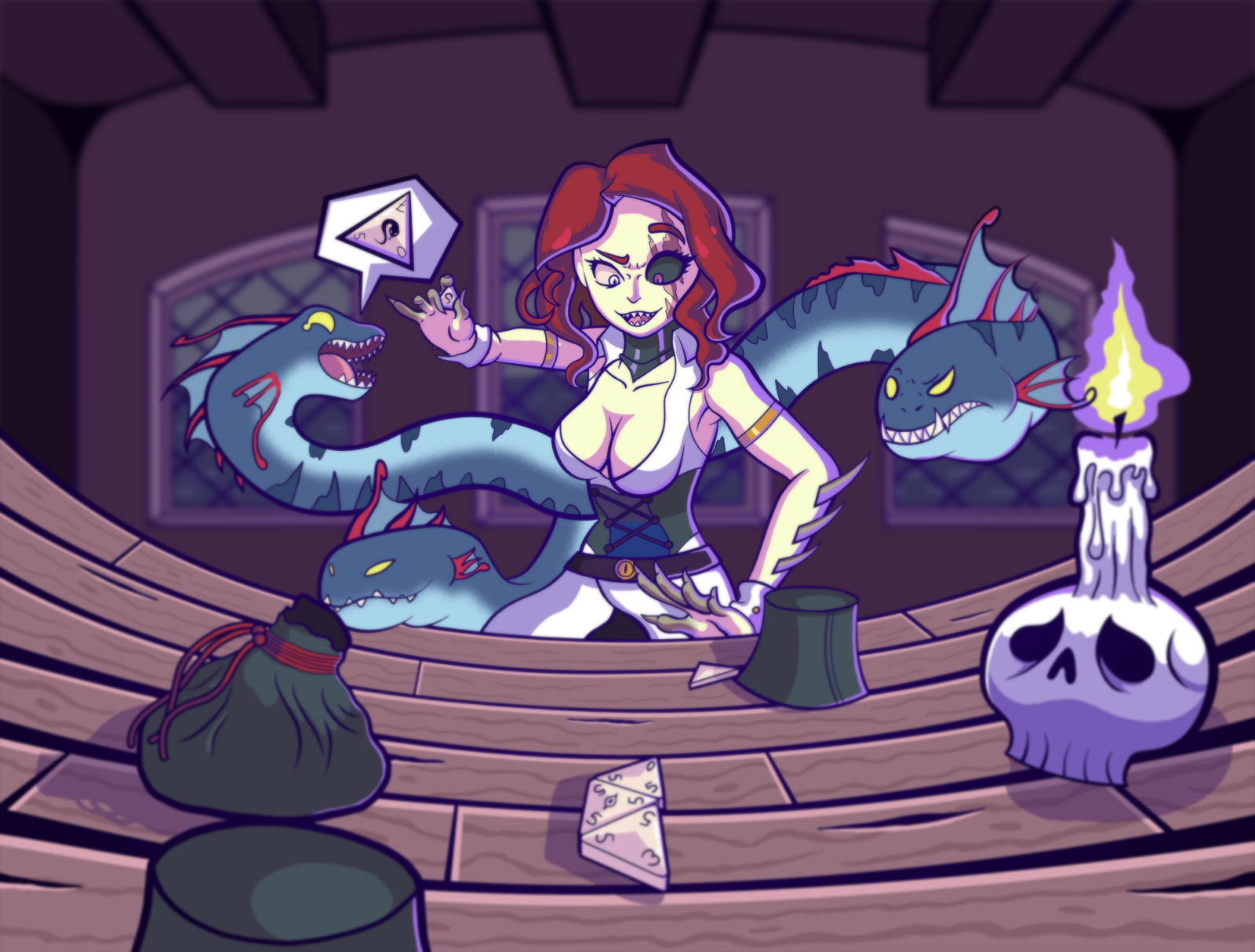 -That's the third time in a row you used a hand rune ! I think you're cheating!   -what are you gonna do, shoot me ?
— Naga's stones players, seconds before a shooting ensued.

For most humanoid life, the origin of the game is rumored to come from the early stages of seafaring and piracy. According to the legend, Captain Rahji and his crew once made it to an ancient Naga temple. In the treasure chamber, he was challenged by a vanguard spirit on that game. With luck and wits, Rahji managed to win and was granted access to the temple's wonders. Anybody from land lubbers to noble corsairs heard rumors say that the legendary captain hid most of his hoard on a remote island which only someone has good has him on the game could access.

Each player takes 6 runes randomly from the bag. The player with the most triples (or doubles as a tiebreaker) numbers (ranging from 0 to 6) on their triangle size gets to start. Then, it will rotate from the left. The starting players deposits one rune of his choice to start the game without doing the second phase. Then, the real game starts. For an idea of the design and base concept, think Triomino

How a round is done:

There is 2 actions possible in your turn.   1-Rune Action: You can place one rune next to another which side's numbers are similar. If you are incapable of playing one rune, you can choose of the two following actions:     2-Rune Power: On some runes, A sigil in the center may be present, having an extra strategic part to the game. These sigils always affect the opponent on the left. Sigils and their effects are as follow:   The game is won once a player doesn't have any rune left on their side.

The game was originally played with small triangular runestones kept in a leather bag, and one cup for each player to hide their stones. Now, some can be made wood, bone or coral pieces, as log as they can be worked. Many pirates consider whale bone pieces to be their favorites.   The runes each have numbers on each of their side on their face. Also, they also have another side with different combinations too, making it a total of 6 possibles double-numbers.

This game can be played up to 4 people.

This game can be played anytime players are down to play it. Being a popular seafarer game, a majority of port taverns have a couple of runebags ready to play. Some competitions can be found and the most popular taverns. Regional champions can get an official stamp to compete in the four grand tournaments made every year. The locations of the tournaments are Sunderock, Port-Fume, Verivalas and Sagaleua

The idea of the game is interesting and the story of how it developed cool, but the article needs quite a bit of editing. There are some sentences which just do not make sense.   For example:

Anybody from land lubbers to noble corsairs heard rumors say that the legendary captain hid most of his hoard on a remote island which only someone has good has him on the game could access.

The sentence could be improved perhaps by adding a tooltip or two (I can infer what a "land lubber" is, but it wouldn't hurt to have a tooltip) and restructuring it. You could end up with something like this:

Anybody from land lubbers to noble corsairs has heard rumors about the legendary captain who hid most of his hoard on a remote island. Only the person who beats him at Naga's Stones can ever hope to gain access to the island's location.

I found the different runes interesting, and their effects on their games. However, I didn't quite get why some runes have sigils and others don't. I think explaining the different "dice" types" may be a good sidebar content. For example, are there set rules for how many sigils are you allowed to have in your set? Are the sigils always on the same number or different numbers?

Hey Mgatta !   Indeed, i could develop on that ! I'm still struggling to see how to put some on the sidebar, not all have the toggle on the top right. i should check the tutorials --. But yeah, i can develop on the limit of how many sigiled one there is. Thanks also for the rephrasing. :)   Happy SC!

I like the idea of origin myths and this one was a fun read. The rules are comprehensible enough that I feel like I could play the game and figure out confusing details during play. What I would like to see are some more references to the world at large, for example a note on how a gambler used this game to get rich in a region, and some links to other articles would be nice so one can continue the dive into Manarchy.

Right, I forgot to mention: very nice article image. Very evocative of what gambling in the wrong circles could look like.

Hey Snake Venom !   Good idea, i could add a couple pro/known players of this game. The challenge with this SC is that when you open a branch, you can spread out a lot. So i focus on things i may prefer to keep secondary. BUT i'll make sure to add some extra related content through it for sure when time allows.   Happy SC !

First off; Nautical themes are great and pretty much one of my favourite things to see in any fantasy. You did a great job with the overall theme of the article and the quote earned a chuckle from my end!   I myself am terrible at coming up with games like this so I can't help but admire what you have. It's interesting how there's a whole legend behind the start of the game and how it developed.   I think my two main questions are: Do the runes carry any significant meaning outside of the game? Or are they just used for the game in question?   Is the island mentioned in the legend known to exist, or is it simply said to only appear when the great champion of Naga stones arrives? If it exists, is there just an ancient vault waiting to have captain Rahji throw down Naga stones with would-be plunderers?

Hey strawberryale! i like fruit-flavored beer ! :p   Outside of the game, not really, but it is implied Rahji used the same ones he saw in the temple, which may be connected more to the naga's lore.   So far, the island is not known to exist, some tought it would be the original temple of legend, but nobody claimed to have found it as well.There is a little spoilery content i plan to use on that end ^^.   Happy summercamp !

First off I wanted to say that I really liked the quote at the front it was great. The rest of the article was also great, I liked that there was a really story to how it originated, even if it is only a myth it allows you to see more about the world then just a game. One thing that I was a bit confused on is what flipping the tiles really do, at first I thought that it meant they were just blank and hidden but then you mentioned that there are numbers on both side. I feel like a bit more explanation about why someone would want to flip a tile in the center, or one of there. Dose it give them any advantage, or dose anything special happen other then seeing the other side of the ruin?