Plamenka is or was the matriarch of a polevik family that lived in Crows' Meadow Warren, 2 versts southeast from Lazarevo, above the Vydra River. Her family consisted of a husband, Gleb, and three children - Vavilo, Akulina, and Plamen - a changeling, who was the product of a union with a human shepherd named Pavel. She also had a half-brother - another changeling named Yegor, who played an important role in initiating his nephew Plamen into the volkhv priesthood.   It is not clear how long the poleviks lived in the warren, but Plamenka built a significant amount of the maze herself, through the use of magic. In the summers, the poleviks wandered the land, and played and sowed on the Meadow (and beyond). In the winter, they slumbered in the warren, protected by the mass of passages, and the guardians Plamenka created to keep them safe. Her reasons for bearing Plamen are not clear. Creating changelings may have been part of a family tradition, but a wakeful half-polevik was useful to have in the winter, while the rest of the family slumbered.   She was highly ambitious, as it was later learned, and moved in forcefully on a scheme hatched by Baba Yaga and her local agent, Taras Trofimov. When the Lazarevo village was raided by the Kochmaki, and all its population and wealth were carried off, Plamenka somehow succeeded in getting the raiders to slaughter the captives, and then, one another. She then animated all the corpses, and set them up as guards in her warren, to watch over her family, as well as the treasure that she seized from them. She then fashioned or acquired special items to help her maintain control over the animated corpses, as well as to hide away the treasure.   Plamenka was also known to use magic to create other guardians - for instance, the dough golem that she fashioned every year before the family's hibernation.   Despite her best-laid plans, her half-human son, Plamen, led his associates, along with a crazed hermit named Chonkorchuk, who in the service of Baba Yaga, to the warren, to recover the treasure. During the first foray, Plamen accidentally wakened his mother when he tripped over a clay pot next to her bed. His companions managed to magically send her back to sleep, but Lionia the Red decided at this point that she had to die, because she had seen the looters, and would never forgive them. During the next foray, the party conveniently left Plamen behind, and Lionia succeeded in his task, in the most brutal fashion.   The story of Plamenka did not end with her death, however. When the band returned to the warren after the murder, the saw a spirit drift into the chute, and it soon confronted the group, not making any audible noise, but withering flesh with its touch. If not for Plamen's presence, it would likely have killed everyone, but he managed to entreat it to leave them be. Soon, he discovered her mangled corpse in her sleeping chamber.   Plamen later encountered the spirit again after coming to the warren by himself. The spirit did not attack him, but silently ordered him to leave - a demand with which he complied.   Though the band made several more forays into the warren, and eventually found and took the polevik's treasure, they did not encounter the phantom again. Chonkorchuk's familiar fefila did detect its presence near Plamen's old chamber, and the group decided to avoid it. While carrying out the treasure, the group saw the body of a villager denuded of all life, which seemed like the phantom's handywork. Though they never returned to the warren again, the phantom was never exorcised, and may still haunt its tunnels.   In life, Plamenka was a hirsute humanoid, with matted dark-blond hair that covered the length of her body - a trait she shared with her polevik and half-human relatives. She dressed in a long, white sarafan, and had grey eyes. After she was killed, her phantom was a partially rotted and transparent image of the living being, still in a white sarafan.   Whether it still haunts Crows' Meadow Warren or surrounding regions is not known. 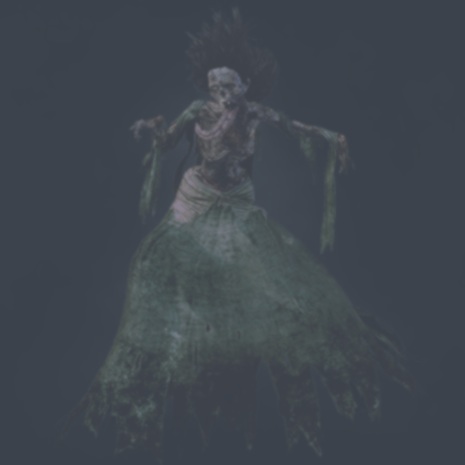 Species
Polevik
Year of Death
6831
Circumstances of Death
Butchered by Lionia the Red and some of his companions
Children
Eyes
Grey (while living)
Hair
Blonde, long, matted