Holy Roman Empire is arguably the most succesful state created by the Catholic Church crusaders in whole history of their movement. It was created during the first of the new crusades, when crusading army unexpectedly breached one of the hyperlanes and conquered almost 1/3 of the sector in the resulting confusion. Unfortunately or fortunately, the resulting country remains heavily divided due to its very origin, as many notable crusaders settled their soldiers (or at least some of them) as nobility in 'their' regions. This changed the liberated areas into a collection of domains that simply happen to be a part of a single country and respond to emperor's requests... from time to time.   It remains as one of three combatants in the Magna Germania star sector, eternally locked in military struggle with Fourth Reich (that dreams of retaking entirety of sector) and Kaiserreich (that participated in the schism following the First Contact War, and started showing an expansionist dreams of their own).

Holy Roman Empire can be described as a federated elective monarchy under the rule of Emperor, elected by the Council of Electors after the death of his/her predecessor and crowned by the pope of Neocatholic Church (considering the distance between HRE and New Vatican, it is done via proxy – highest ranked member of local clergy, with pope agreeing to it post factum - or, from time to time, not agreeing). Emperor (called King of the Romans/Rex Romanorum/Romischer Konig before the coronation) is actually more of a primus inter pares among the highest ranked aristocracy, a symbol of national unity with barely any real power outside of wartimes.   Beneath the emperor lies the Reichstag, composed of three parts. First, the Council of Electors, is populated by the kurfursts, called also the Electoral Princes, a group of most powerful vassals that is tasked by electing the new emperors – it is an autonomous group only in name, since its members assemble only for elections. Second, the Council of Nobles, is divided into two parts, one for secular nobles of some power, other for higher clergy – it has certain rights guaranteed by law, including a veto right against new laws that requires 51% of either parts. Third, called Council of Burghers, includes the commoners representative of Imperium at large, that can also veto with 51% votes. Right to propose new laws lies in Council of Nobles, Council of Burghers and Emperor himself, though all both council need to agree to it, causing a relative stability in terms of laws in HRE.   Beneath the Reichstag there exist literally next to no unified organization, with the Empire being heavily divided into a massive numbers of autonomous territories, typically dating back to the times where the country was created. With population of the liberated part of the sector being brainwashed by the Reich into fanatic obedience to the authority, all the elites had to be imported. This meant that many of the crusade commanders simply settled in the reconquered area that they were 'occupying' as wartime administration, or that happened to be taken over by them and they simply refused to abandon their little domains. Such domains might include a single town or an entire star system. Situation varies greatly.

Survival of their country and succesfully repelling the assaults from Kaiserreich and Fourth Reich. Incase of achieving that goal, next step would be probably annexing the entirety of Sector 17. In the so called meantime focusing also on supporting neocrusades and Neocatholic Church as a whole.

Holy Roman Empire was created around AD 2407, following a succesful First Neocrusade against the Fourth Reich. Exact date is unknown, since the procedures for occupation and liberation of territories conquered by Neocrusades were yet to be established, making the aftermath of this war rather hectic. With many (sometimes even low ranked) officers of the Neocrusade deciding to remain after it was dissolved, making their own little countries – which is a genesis of internal division of the HRE.   Ultimately fear of Fourth Reich (that soon after being defeated started making attempts to retake lost lands) brought the myriad of little states together, making the crusader dominions assemble into a singular political entity. With the raging Neocatholicism and the typical in the Outer Colonies tendency to search through history for inspirations and a sort of legitimism, the choice of Holy Roman Empire as spiritual predecessor was practically guaranteed from the start.   Crusaders hailed from all member states of the RPC - and a lot of countries such as United States of America that, while not a member of the RPC, possessed a great number of Church adherents. This made the resulting domains rather varied in terms of culture - after all it was the crusaders that essentially formed the new elites of the liberated area. Of course the German masses over time influenced the culture of the elite, making them mostly german-speaking.   Ever since then, HRE remains in a semi-permanent war against Fourth Reich and Kaiserreich, from time to time losing a planet or two only to retake it after the tides of war shifts, with eternal backstabbing and shortterm alliances between three forces fighting for dominance over Sector 17.

Holy Roman Empire's population of 17 billion lives mostly in smaller cities, as there are no worlds populated thickly enough to require construction of megacities - in fact the New Aachen city is the only megacity in the HRE.   Interestingly enough, a lot of crusades took their new 'noble' status quite literally, and rule the surrounding countryside from their personal fortresses (that also serve as administrative centers). The nobility as a whole is separated from the general population with most of it being descendants of the crusaders that liberated the region, though a growing part of it is natives that proved their worth (typically on the battlefield) and received noble titles as recognition of their bravery (and high moral standing). Local nobility is heavily militant.   HRE tends to lean towards biological purism, with cybernetic implants mostly limited to those invisible from the outside and without direct contact with brain.

While the Holy Roman Empire was thoroughly purged of Variants before it was liberated, a number of the crusaders that liberated the whole region were Variants. In order to maintain a stable population they supported immigration of 'their' types of Variants, creating a varied population of Variants that make up for around 10% of the HRE population. They are barely discernible from the natives when it comes to their culture, as they fully assimilated long ago.

HRE is more or less opened to both transhumans and aliens, as long as they are willing to obey emperor's laws. The general number of them is very, very low though, as very little of the initial noble houses were transhumans (and none of them were aliens), limiting the immigration pressure. In the end most of those transhumans overtime abandoned their transhumanity and became normal homo sapiens, though they might still celebrate some elements of their old nature (so for example mechanist descendants will greatly support technical and computer education among themselves).

Fairly conservative, as most of the RPC countries. Which means that it would be considered reactionary in the 21st Century, but are far from truly reactionary countries in the 28th Century.
Gender Roles
The HRE society is mostly male-oriented. Interestingly enough, the commoners tend to be much more patriarchal than the nobility - which is caused by the cultural aftermath of the Reich mentalsculpt. Among the commoners woman is seen as a housewife by definition, and with no exception. Among nobility women are not only allowed but even expected to go through higher education, and while their 'default' role will still be becoming a housewife for their husbands, this doesn't mean that it's always a case. Women that show notable talent for any sort of job will be exempt from her 'basic' role, which leads to quite a number of noble women serving in military or working as scientists.
Relationships
Heterosexual religious marriages for life. None other form of relationship is allowed, and extramarital relationships are heavily frowned upon. Nobility by defaults tends to stick to itself (or the nobility from outside of the HRE), but an exception is left for promising commoners.

As all members of the RPC, the Holy Roman Empire heavily opposess all forms of slavery. Of course, it is to a point feudal, which for someone is tantamount to slavery, slightly complicating the situation.

'Traditional drugs' like alcohol and cigarettes are allowed, however anything beyond that is frowned down upon or even (if it's really dangerous) forbidden and suppressed.

Overwhelming majority of the population knows how to operate weapons. Commoner access to weaponry is however highly suppressed save for light weapons such as handguns. Nobility in the meantime is even allowed to possess their own tanks and personal armed forces.

Navy
Kaiserliche Flotte is assembled in a way similar to most feudal monarchies in today's Galaxy, with higher strata of nobles 'lending' ships (practically gifting it together with paying for its maintenance) to the central government, that is also providing basic blueprints of the hulls. This generally leads to high unpredictability and high number of archeotechs installed aboard, while slightly complicating the logistics.   The fleet is thus surprisingly competent and able to defend the HRE well against onslaught of the Kriegsmarine and Reichsfleet, while not as good in the offensive (mostly due to the generally average 'bloodlust' among the nobles - they are much less interested in offensive war than in defending their own lands).

Ground Army
Kaiserliche Armee is created in typical way for most feudal monarchies in today's Galaxy, with higher strata of nobles 'lending' soldiers (practically gifting them together with maintenance and reinforcements) to the central government, that is also providing basic organizational structure and general equipment preferences. This generally leads to high unpredictability and high number of archeotechs they are armed with, while complicating the logistics.   The KA is thus surprisingly competent and able to defend the HRE (together with local militias that oftenly equal it in terms of quality) against onslaught of Wehrmacht and Deutsche Heer, while not as good in the offensive (mostly due to the generally average 'bloodlust' among the nobles).

Close to 100% of the population are adherents of the Catholic Church. Close to 70% belongs to its Roman Catholic branch, the rest being a mash of every single rite that existed at the time when the crusade was launched. Other religions aren't suppressed - people of other religions simply aren't allowed to settle in the Holy Roman Empire, preventing them from establishing a bridgehead in the Empire.

Economy in HRE is generally market liberal on the verge of ordoliberal, with emperor and Reichstag supporting it as much as they can (with the problem being their lack of power to intervene in economy). Many of the nobles are simultaneously succesfull capitalists (especially those that have power only a singular city while being ambitious), with the HRE economy as a whole being quite advanced and expansive.   Economy of Empire is the only part of it that is somehow unified, with banking laws, lack of internal tariffs and so on being founded together with the Empire itself, and unified throughout its territory. The general defficiency of the Reichstag lacked to several economy crises, mainly due to not being able to adapt new laws (or change the old one) until it was too late. On the other hand, it also allows a great level of stability, allowing for a relatively safe investments when compared to more raging capitalisms. 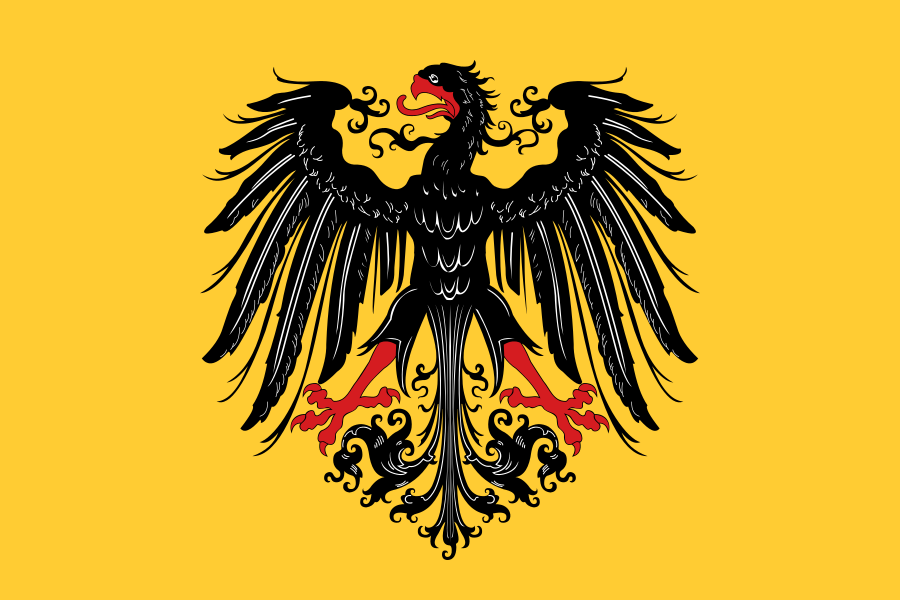