Fourth Reich is one of the militarily strongest countries in the Outer Colonies, and also one of the founding states of the Pact of Steel. It is also one of the most widely (and universally) hated countries in the Human Space. Mainly because in terms of human casualties it surpasses all other countries, maybe with exception of the Solar Federation. It is often used a symbol of what's wrong with the Confederation of Mankind, as despite its regular violations of a code of law and multiple crimes against Mankind it remains a member of the Confederation.

Political system of Fourth Reich is national socialism, created to be similar to the one from Third Reich. Center of state is a monolithic Germanic Party, to which majority of society belongs. The private entrepreneurs exist - some of them being the head of major corporations - all of them are however controlled by Reichswirtschaftsministerium, that sets prices and economic policies according to the tenets of a borderline central planned economy.   The country as a whole is heavily centralized, with absolute power lying in the hand of the Fuhrer. However, he is but a simple man. He is neither omniscient nor omnipotent. Because of that a surprising amount of power lies in a cluster of important officials and military officers that surround the supreme leader of the country. The head of the Germanic Party (typically a heir of current fuhrer) is especially important - his controls the party from which candidates for the seats of regional governors are picked, his ability to present 'right' candidates to the fuhrer giving him great power. It wasn't unheard of in the past for the fuhrer to be changed into a de facto marionette of the officials.

The one and only agenda is the conquest of the rest of Sector 17. That's an agenda that Reich's attempts for more than a century, to no avail, especially because while both Kaiserreich and Holy Roman Empire dislike each other, they still cooperate against their hated enemy.

There are two main versions of the history of the Fourth German Reich. One official and one that's most likely true. The official one claims that the Fourth Reich was established by a remaining elements of the Iron Pact, a terran neofascist alliance that existed between the Days of Iron and the Fourth World War. Iron Pact, in turn, was created by a hidden survivors of Adolf Hitler's regime that went into hiding. Once the chaos of the Unification Wars ended, a coup has overthrown the facade of democracy, allowing the destiny of the German people to finally come to fruition.   Of course, the chances of this being true are next to no. Iron Pact' had very, very limited contact with Hitler (in fact, almost none at all save for following a roughly similar political agenda). And the Pact collapsed utterly in the aftermath of the Fourth World War. The only remaining bastion of it, the Jovian Coalition wasn't in any way connected to the colonization effort of the area where the Reich now exists. What's worse, it slowly drifted towards authoritarian democracy , cutting its connections with the neofascist past. And if all of that wasn't enough, the old navigational data from the Solar Commonwealth era seems to indicate that the capital and homeworld of the Reich used to be known as Irkutsk-II, and as entire sector it was colonized by Russians.   It is suspected that the founders of the Fourth German Reich were a group of Russian neonazis that seized power in Irkutsk-II and decided to become Germans (culturally) and Arians (genetically). Their leader is a legendary demagogue known under the alias of Hakenkreuz, however very little is known about him. Once they expanded and conquered entire Sector 17 they engaged in a large-scale program of rewriting the past, resulting in very little data remaining even after the Reich shrank.   In 2371 the last independent planet in Sector 17 fell before combined forces of Kriegsmarine and Wehrmacht. Merely three years later Hakenkreuz died, without choosing his sucessor. The conflict ended up with regular civil war before admiral Hermann Kastner (supreme commander of Kriegsmarine) and Gunther Neumann, head of Germanic Party from the moment Hakenkreuz became a first Fuhrer.   The war that begun in 2353 ended in 2391. Dozen of millions died, with many planets depopulated to the point of recolonization. What's worse, it ended with complete stalemate between two contestants.   Neither Hermann Kastner nor Gunther Neumann managed to win the war. The second one didn't even manage to live until its end (but he, "thankfully", remembered about securing proper succession). In the end 1/3 of Sector 17 seceded from Reich, creating a new country called Kaiserreich, under kaiser Hermann Kastner, who, before death, opened labour camps and mentally reprogrammed the prisoners into proper Germans.   Reich still existed, but it would require at least several decades to rise from the ashes and attempt expansion towards the neighbouring sectors. It wasn't given a time to do that. In 2402, yet another blow against it was struck. Jerusalem Council achieved merging of Christian churches in year 2400. One of the Neocatholic Church doctrine most important points was playing more important role in the politics, to destroy regime being a threat to the Faithful - and to humanity at large. Fourth Reich became a target of First Neocrusade. The forces of several different Christian entered Reich's space in 2402, with Kaiserreich using the occasion to force Kriegsmarine to commit big parts of its forces on the other side of the Reich. The effect was the most humiliating defeat in Fourth Reich history, and creation of Holy Roman Empire.   And from then on, the stalemate in the Sector 17 begun.

Fourth German Reich's population of twenty-five billion inhabitants lives in a mix of megacities and smaller towns. Officially, everyone is equal, though it tends to mean that everyone is equally a slave to the State. In fact, however, the Reich's population is heavily hierarchic, with party and military elites being like gods to the masses - and the fuhrer being a god to them too.   German Reich has a mostly purist approach to human improvement. Officially it makes no wide-scale genetic experiments (as they are banned according to the Icarus Accord), but unofficially they do tamper with the genome. They see that as a 'true' way for Mankind to greatness.

Almost 100% of German Reich's population are baseline humans, the remarkable genetic 'purity' being an inheritance from the era of where death camps were still working full-time. No Variant is allowed on any of the Reichs' worlds, all of them typically considered a kill-on-sight target.

Aliens are seen as intrinsically insidious, evil and a threat to the German Reich, and thus they are a kill-on-sight target. The transhuman issue is a bit more complicated. Almost all of them are reviled and will be killed immediately. The surviving Pure, however, seem to exist in a surprising number throughout the Reich's society, however full number of them is unknown.

Hyperconservative in the worst sense of the world. The societal rules of the Reich are well-defined, almost entirely abhorrent... and enforced in a multitude of ways. There are very few countries seen as worse than that one when it comes to a way their society is arranged.
Gender Roles
Women in the Reich have a single job - to serve their men, give birth to their children and help raise up those children. It is an extreme result of the eugenics policies of the Reich - with all 'unpure' purged long ago, those that remain are free to reproduce and in fact heavily encouraged to do so. Men, in the same time, occupy almost all jobs, their true calling is military. It goes so far that normally anti-cybernetic Reich is making its industry increasingly mechanized, just to free more people for armed forces.
Relationships
Heterosexual marriages. While genetically 'unpure' are gone from the society there are still those pure and those purer - after being marked as a possessor of high quality DNA one can expect being allowed to have more than wife, though it doesn't work both ways (so no multiple husbands). Heterosexualism is actively and brutally suppressed to the point that very concept is pretty much gone from the Reich's society.

Reich opposes 'personal' slavery as a sign of moral degeneracy and hedonistic debauchery (even if a slave isn't 'used' in any way, making him or her earn money or even clean their owner's house is 'degeneracy'). It's actually most surprising, but the Reich is at odds with Discord over that and is as trigger-happy with discordian slavers as the most of the Mankind. Of course, this policy doesn't expand to 'public slavery', so all criminals and political prisoners are relegated to labour camps for life... and typically sterilized.

Drugs are heavily suppressed. Low-alcohol drinks (like beer) are allowed, but that's as far as the Reich is willing to go. Everything that weakens the population of the only genetically pure society in the Galaxy has to be purged.

Forbidden entirely. Only active military and police personnel is allowed to carry arms.

Navy
The supreme commander of Kriegsmarine is, of course, Fuhrer himself. He is, however, assisted in that task by the Oberkommando der Marine.   The fleet is constructed by the State, via various shipyard corporations. All of their ships are meticulously planned and designed, even up to the usage of archeotechs and other supertechnologies. They are strong, fast and surprisingly resilient.   Kriegsmarine is also known from their crews near suicidal courage and warships created with the focus on MAW armament. Rockets play secondary role in their military doctrine. They are also fast and armed with a lot of Close Range Weaponry, which makes charging (even numerically superios enemies) one of their favourite tactics. Also their pilots are known for their skills.

Ground Forces
The ground forces of the Reich are divided between two formations: Wehrmacht and Waffen SS. Wehrmacht is, theoretically, composed of nearly 75% of Reich's regular citizens, mainly because officially every single citizen is a part of armed forces. Most of the divisions are simply considered a reserve, with their members training from time to time, for example as a part of Fuhrerjugend.   Regular formations of the Wehrmacht made up to 4/5 of Reich's forces and are exceptionally disciplined and orderly. They are also very proficient in usage of various types of armed vehicles, especially tanks that together with mechas form up the central piece of their military doctrine.   The 1/5 that remains is Waffen SS. An elite formations, subjected to rigorous training practically from the moment of birth. Extremely well trained, physically perfect (most of them are an effect of long term eugenics combined with 'light' gene-altering) and fanatically loyal. Their are also characterised by neopagan 'cult' of their own division that borders with real religion, together with the division totemic animal and human sacrifices.

Dominant (and in fact the only one allowed) religion of the Reich is a germannic-themed neopaganism. It worships a multitude of gods seen as personification of natural powers of the world (including nature but also human characters). Cults are often sacrificial in theme and heavily ritualistic, though at least officially no human sacrifices are allowed. There are however serious suspicions that they do occur, however no convincing evidence was ever procured. 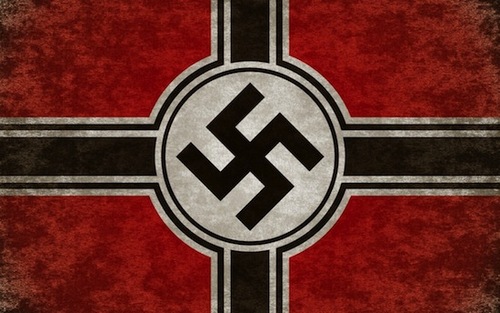 -100
Both sides hate each other immensely, due to completely opposite political views and dreams of conquering the whole sector.
Sector 17 - Magna Germania