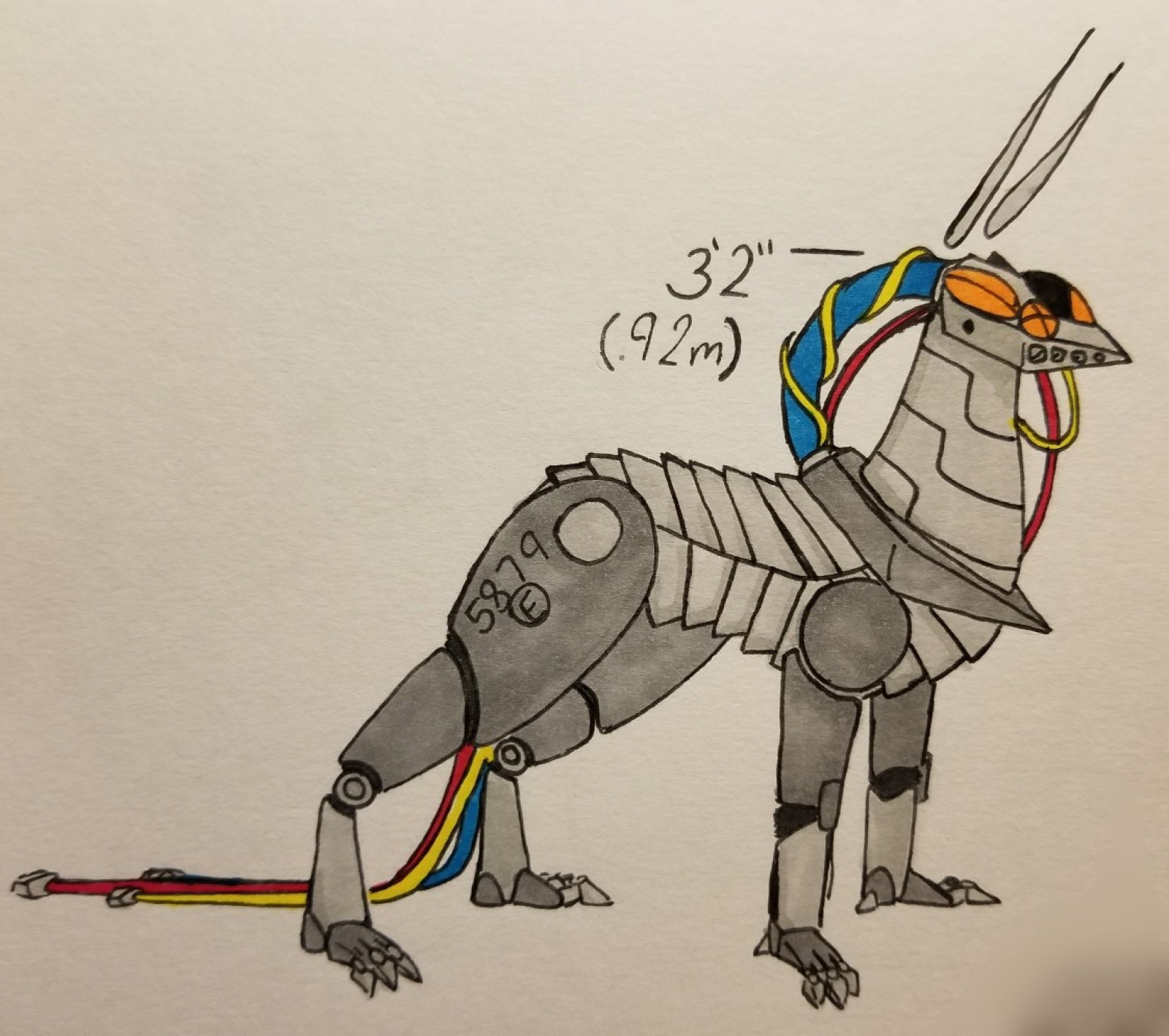 E-20s are a common type of robot most commonly used as guards and law enforcement units. This bot is built to mildly resemble a canine, but has quite obviously skewed from that image as modifications were made. Some of the most notable characteristics of this robot are its long pointed ears, five eyes, pentagonal head shape and the large cable sprouting from its head and to the base of its neck.

In silhouette, the E-20 somewhat resembles a greyhound with its large chest that tapers to a small waist, and a long, thin tail. This robot is.. obviously not a dog, though, when you take into consideration the rest of its features. Some features that stand out the most on this unit are the head pentagonal shape, the eyes, the cable from its head to its neck, and the broad, collar-like appendage around its neck. 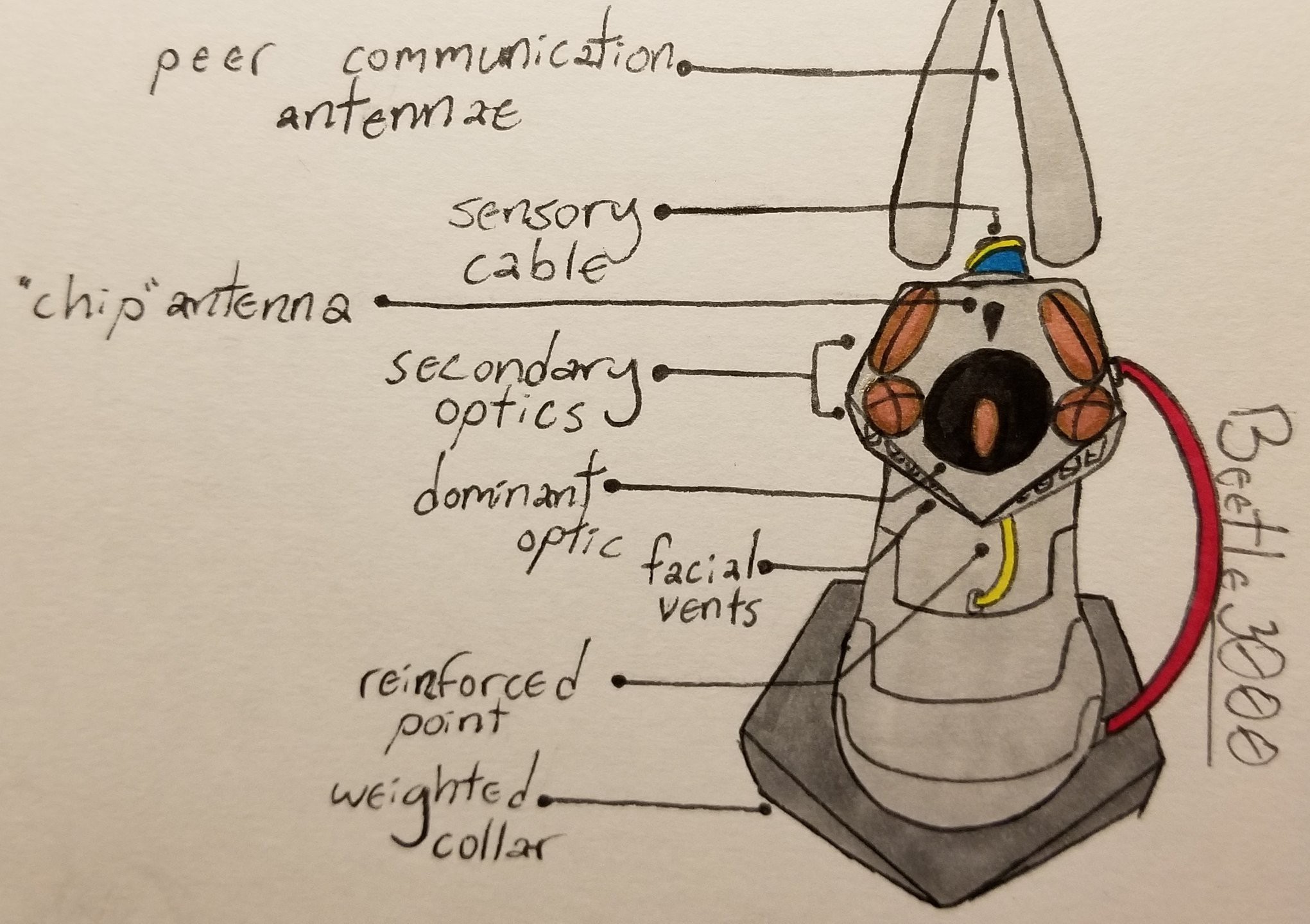 The head shape is due to several factors. 1) the simplicity of the head allows for various attachments to be added to the unit, such as the 'jaw apparatus.' The jaw apparatus is a modification for E-20 units that allows them to bite/hold things with a pseudo mouth, per se. the jaw only consists of said jaw, and there is an open space where the underside of a mouth would normally be. There are two variations, the rubber lined; for holding things, and the unlined; designed to deal a little more damage. 2) The head shape is optimal for holding each of the E-20's five eyes in a compact and aesthetically pleasing manner, the main eye in the middle, and the four running along the edges; to on each side. 3) the sharp point at the end of the E-20's head is reinforced particularly well, which makes it possible for the unit to use the endpoint as a battering ram of sorts. The unit is strong enough to be able to use the pointed end of their head to break through wooden doors and other objects of similar strength, which is optimal for its job alongside the police force and fire fighters. 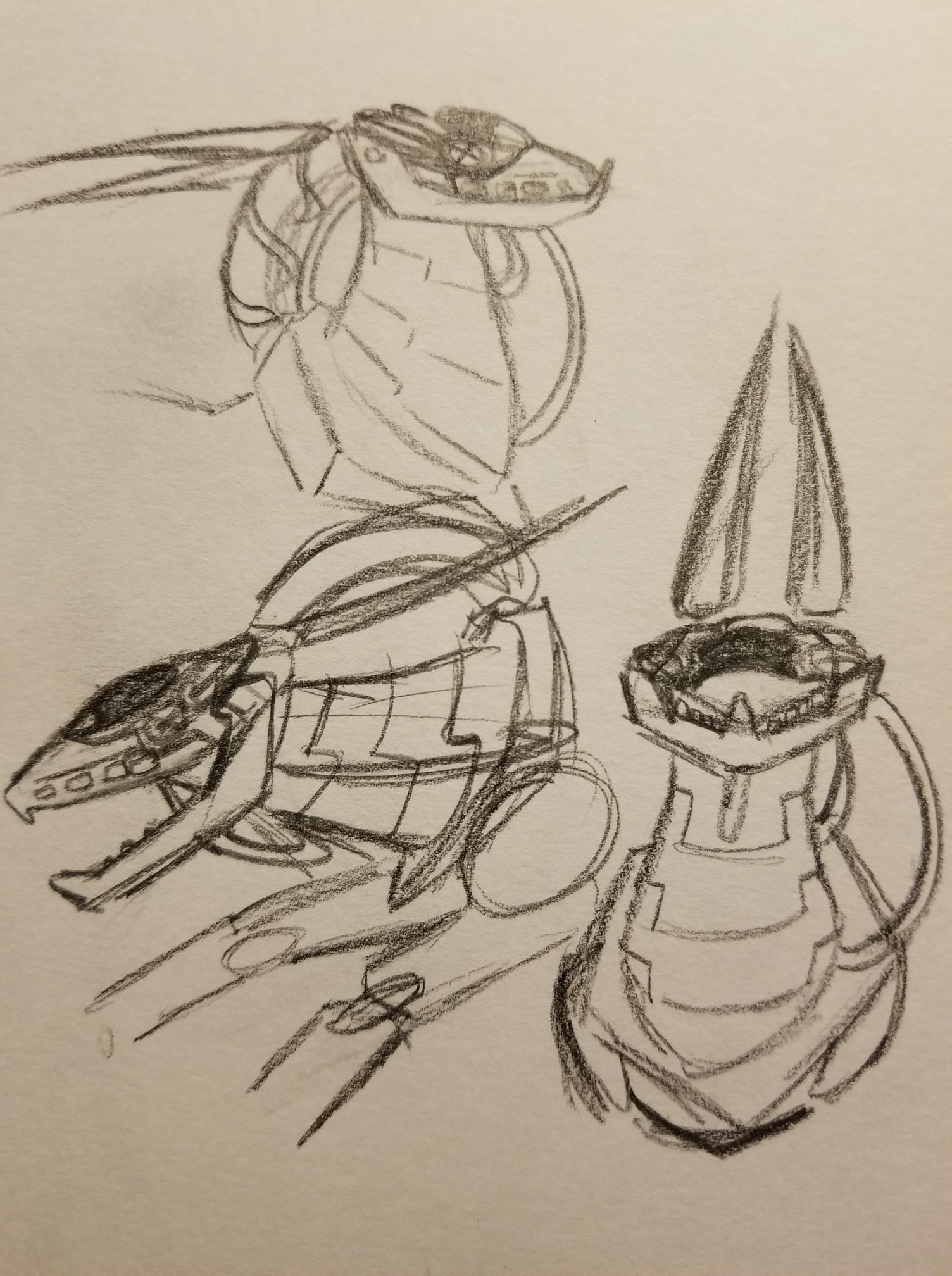 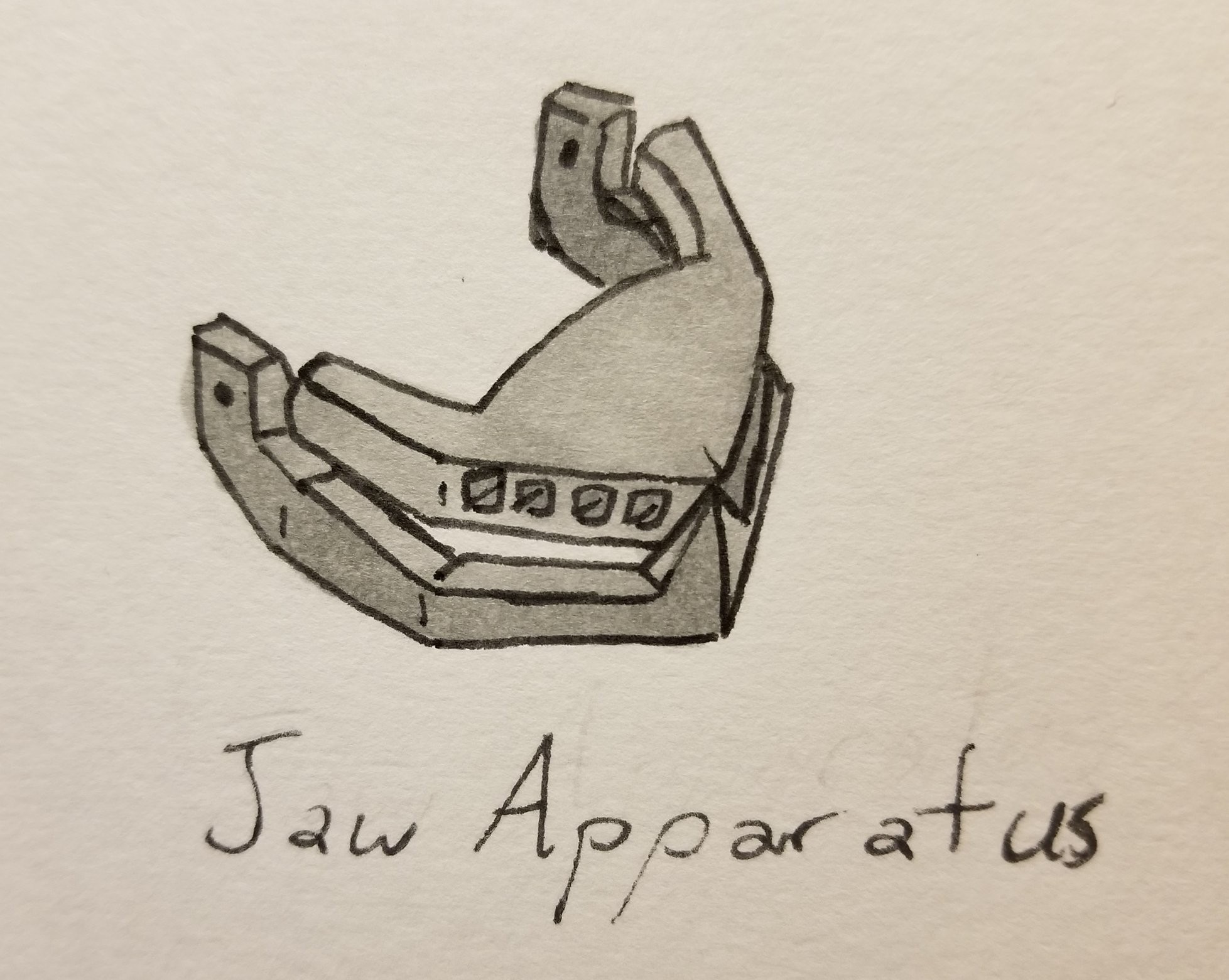 The eyes of an E-20 are a little odd, but are made with a similar goal in mind as those of MAI. With the seemingly excessive amount of eyes, the unit has near 360 vision (with the exception of under its chin) and superior depth perception. The main eye is the largest and set in the middle. This eye has an optic that can move freely, and shrink/dilate with light level or emotional state. The other four eyes surrounding it are static in movement, and are there to increase field of view and improve depth perception as mentioned earlier.   A defining feature of the E-20 is the large cable sprouting from the back of its head and going to the base of the neck. This cable serves the purpose of carrying information from the bot's eyes to its internal processing unit (it's 'box') At the base of its neck is a pentagonal weight. Now why would this robot need a weight? Well, in its role as a law enforcement/detainment unit, this bot needs to be quite heavy if it wants to take on whoever it needs to, and its initial weight didn't quite cut it. The simplest solution to this was to just... add a weight. The weighted collar can be made from a variety of heavy metals, what type depends on the model/built-day of the unit. With the collar, the weight of an E-20 can be anywhere from 330-370lbs, making the average about 350.

The first year of an E-20's life is spent mostly gaining their bearings as an organism and properly socializing. At one year of age, though, E-20 units are tested to see how they've matured, and if they pass this aptitude test, they are entrusted with more serious work and physical enhancements that aid them in their work such as the jaw apparatus.

Due to smaller box size, these units aren't anywhere near as intelligent as MAI, but they're still quite on par with humans.

Unlike most common robots like litter control, city-oriented robots and the more uncommon L(M)AI, E-20s have a sense of smell, in a way. The vents on their faces collect particles from the air, and translate them into smells commonly associated with the type/abundance of said particles.   Yet this trait isn't unique to E-20s, either, they are the most well known robot capable of "true hiveminding." This means that any number of E-20s can connect to each other and all units can experience each of the other's stimuli; they all see, hear, feel and smell the same things as if it is their own sensations. They also think much more uniformly in ths state; like a single organism spliced to be in many different locations.

Scientific Name
E-20
Lifespan
E-20s, along with other bots with the DNA data storage system, have an average lifespan of 400 years.
Conservation Status
Extremely common, still in production
Average Height
Almost every variation of E-20 stands at 3'2"
Average Weight
This unit can weigh anywhere from 330lbs to 370lbs
Body Tint, Colouring and Marking
Off the factory lines, all E-20s are a basic chrome/steel color and have their ID number on their right flank. These units also have their own species identifier which is placed at the end of their Unit ID. (Ex: 3795-E)