Because they were made of stardust and moondust as well as copper, these new creatures kept some of the Sun's light within them, which gave them speech, meaning the power to create through words.
— from Copper and Stardust: A Kevaryese Creation Myth

Kevaryese (/kɛvɑ:r’jɛzə/) is the primary language of the Kingdom of Kevarya. It is a creole language derived from the languages of the two major ethnic groups of Kevarya, the Khasakan and the Slane. The two peoples are said to have been magically “forged” together into the new nation of Kevarya the moment King Talga fe Danaiye called down lightning from the sky to forge the Kevaryese crown. However, given the nature of language, the formation of Kevaryese was more likely to have occurred gradually, over a long period of time, as evidenced by records written in Kevaryese that predate King Talga’s birth. In fact, the shared language was one of the main factors in unifying the two groups, allowing trade, intermarriage, and cultural exchange.   The Kevaryese people place great importance on their language, as they believe that words are sacred and can create and alter reality itself. This is deeply-rooted in their national and cultural identity, and the words Kevarya and Kevaryese themselves come from the phrase ke var, meaning “we created ourselves through speech” by way of the verb kai, “to speak into existence.” Their philosophy is descriptive rather than prescriptive; linguistic innovation is encouraged and considered the highest form of creativity. One demonstration of this linguistic flexibility—and one of the most confusing political subtleties to outsiders—is the title of King Mathylde fa Normonne, the current reigning monarch and the first woman to take the throne. In Kevaryese, she is called Valai, literally “she reigns,” while the standard term is the masculine Velai. Her title is occasionally mistranslated as Queen, but in Kevaryese that title designates a consort (yvelai, “with the King”). To distinguish herself as a woman who is King, Mathylde took the title of Valai. Properly translated, she is the King. 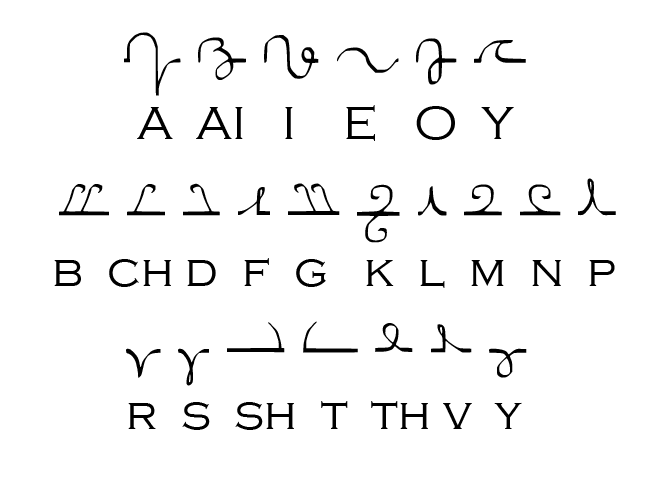 The Kevaryese alphabet has 23 letters, of which 6 are vowels and 17 are consonants. Words are written from left to right in a cursive script. Double letters such as DD and NN are created by combining the original letter with its horizontal reflection across the center line of the word; the only exceptions are LL and RR, which are written as two letters in a row. A vertical bar ( | ) is used as punctuation between sentences, although a line break may also be used in a shorter text.

Note: When transliterating foreign names and loan words, /uː/ becomes /oʊ/ and /æ/ becomes /aː/.

Subject-object-verb structure. Adjectives are usually placed after the noun which they modify, but this is not always the case. Question words are placed at the end of the sentence and are spoken with a rising-pitch inflection.   Time is indicated by an adverb or adverb phrase placed at the beginning of the sentence, with which the verb must be in agreement. Other adverbs and adverb phrases are placed before the verb that they modify. Adverb phrases are generally much more common than adverb words, and adverbs are rarely directly derived from adjectives.


Kai vy... (/kaɪ vi/) My name is...; literally "I name myself..." Kevaryese culture insists that each introduction of a person's name is a reaffirmation of its validity.


Nya (/ɲɑː/) No; literally “false,” also used as a suffix to indicate negation of a verb

This was fascinating to read. I love how extensive you were, going into even the syntax of the language. Did you use any specific resource to help you with this? Also, what are the titles for King Mathylde fa Normonne's children and spouse?

Thank you! The main resources I used were the article template, the <url=https://www.vulgarlang.com/>Vulgar Language Generator</url>, and David J. Peterson's book <i>The Art of Language Invention</i>, as well as my own knowledge of language and linguistics. Peterson also has a YouTube series with the same name as his book--I haven't watched it, though, just read the book.   King Mathylde's husband, Ionai, is titled <i>Yvalai</i>, which literally just means "consort of the female king." In English, he'd be referred to as a queen or a consort. As for her children, it's a bit complicated, as Arkady's title does not accurately reflect his gender identity.

This is very good and I, second the question of your resource(s). I would like to learn more about how languages work and how to make them.

The main resources I used were the article template, the Vulgar Language Generator (https://www.vulgarlang.com/), and David J. Peterson's book The Art of Language Invention. Thank you for reading and commenting!

I love how the idea of words being sacred and having power affects how the language develops, especially that really interesting philosophical tidbit where they're "descriptive rather than prescriptive" it says quite a bit about the culture in the second paragraph.   Aside from that the language is very detailed and it feels as if it were an actual language spoken in real life.

Thank you! I'm fascinated by the relationship between language and thought, and how our words shape our culture--as well as the power of creating and/or reclaiming words. Glad to see that concept is fascinating to other people, too!