Under Reconstruction   The mysums rule over death, taking care that all things are eventually returned to the earth. These mushroom people range from curious to reclusive or friendly to poisonous, depending on which clan you find yourself stumbling across.

The mysums are comparable to sentient, moving, talking mushrooms. Depending on the clan of Mysum, they range in size from just a few inches up to two feet tall. They typically don’t have appendages, and move by directing their mycelium around. Visually it looks like they’re gliding over the ground. Some species do have long tendrils that function a little like arms and hands. 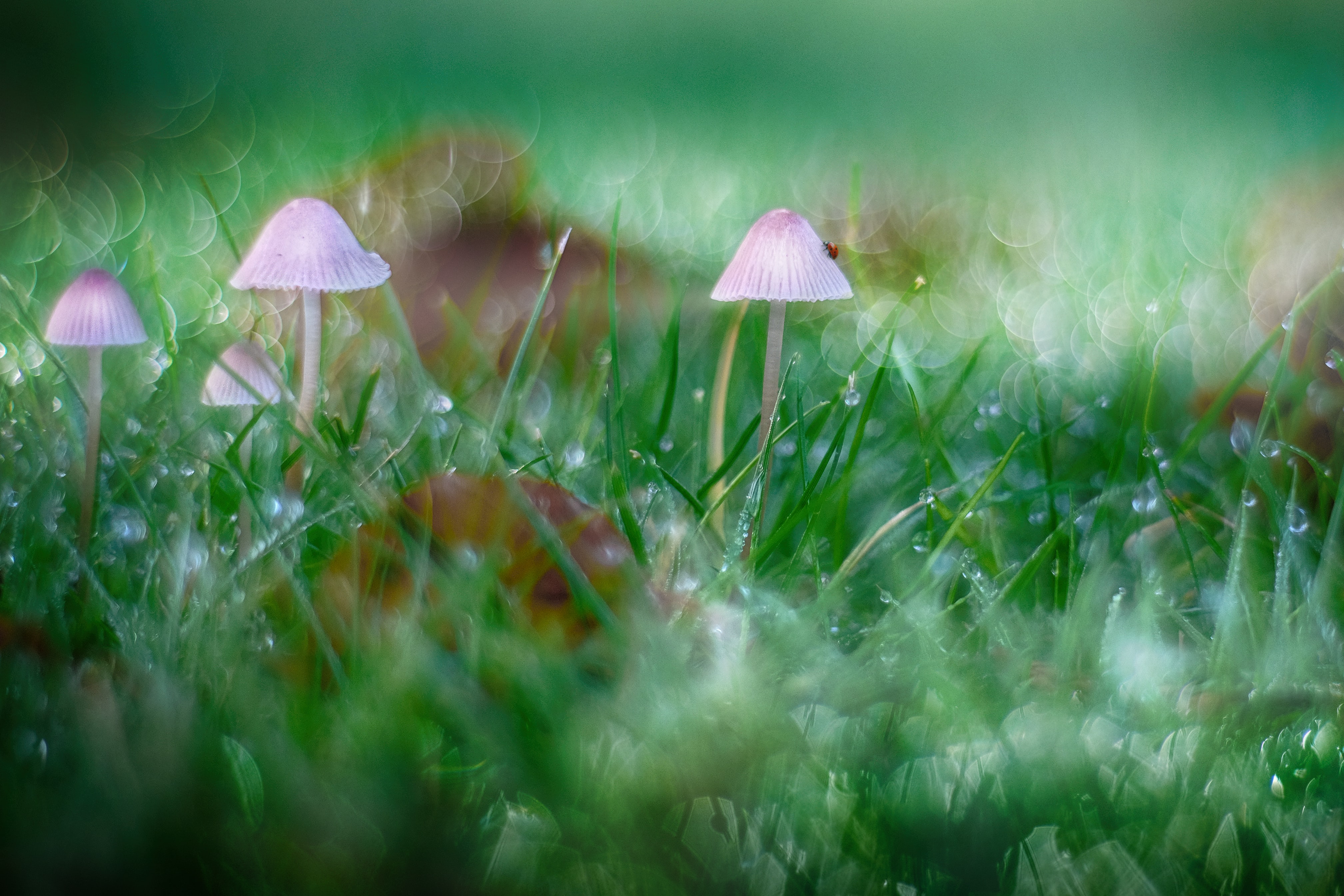 Mysums reproduces asexually and are non-gendered, instead choosing to differentiate between different clans, which are essentially different species. They can only reproduce during large quantities of rain, and in the Birth season (springtime), when rain comes, they perform rain ceremonies to first invite the rain and then introduce new life into their clans.

Mysums live an average of 15-20 years. They exist as spores for the first year of their life, living asleep underground. After this year-long incubation is complete, they emerge during the next Birth season. A mysum is considered a fully grown adult, though an inexperienced one, and continues to grow in size until their death.

Mysums can be found all over Kelunbar forest, except for the snowy peaks of the Bodurn Mountains. Mysum are relatively hardy all year round, choosing to wander and live wherever strikes their fancy above ground during the Birth and Growth months, and exploring comfortable tunnels underground in the Death and Rest months.   If a Birth season is too dry, the Mysums cannot reproduce that year, and they must be underground before the first frost, or they will freeze.   The tunnels that the mysum reside in during the cold months are an ancient system, created by something that nobody seems to recall. The mysums claim to have created the tunnels themselves, though how they did it is an unknown, since they have no limbs to dig with. There are some legends that suggest differently.

Mysums absorb the ground that they "walk" on as they move about, extracting nutrients that they need and leaving behind rich soil that plants know well and use.

Season of Birth: Reproduction Season of Growth: Live above ground Season of Death: Retreat inside of trees and below ground to created structures between trees Season of Rest: Live below ground.

Mysums can be found all over Kelunbar Forest, and begin to taper out as the elevation increases, preferring the slightly warmer weather of lower locations.

Mysums are very intelligent, perhaps only being bypassed by the Skee.

Names are important to all mysums, and they don't use any sort of pronouns, either referring to an individual by their name or their tribe. They don't have family names, as it is unclear which mysums is an individual's parent due to their reproduction ritual. When spores hatch into adults, members of a tribe take turn giving names to the new children. Names are non-gendered and typically are short and soft sounding, such as Shoff, Dosho, Fush, or Shill

Mysums don't think in terms of gender at all, thinking instead of a mysum as an individual or as a tribe.

Mysums don't have any concept of romantic relationships, nor do they have interest in direct familial bloodline, but they do value friendships. In mysum culture, their first duty is to their tribe, but in their personal, day-to-day lives, they have full freedom to choose who they value most within their tribe. This decision is respected by other mysums, and it is considered an honor to be someone's friend, as well as an obligation of duty to help and protect that person.

Mysums are very quaint in their technology. They don't need to hunt or gather, and most other creatures leave them alone. Why bother spending the time building when they can sit under a leaf as protection from a rainstorm?

Mysums speak a dialect of Kelunbar Common, and their version sounds almost mushy to the ears of other creatures. It also has a lot more words for sorts of dirt, including texture, flavor, and richness.

Mysums don't wear clothing or other adornments. Sometimes they allow lichens or smaller mushrooms to grow on themselves.

Before retreating below ground or hibernating for the colder seasons, all mysums hold ceremonies to invite Mykel to come and release the forest from Life. The trees lose their leaves and the sun retreats.

The mysums are well acquainted with death. They are the creatures that return all plants and animals of the forest to the soil to be rejuvenated. When one of their own dies, a special ceremony is held. Mysums are always left to decompose in the place that the died. There are variances between each tribe, but each ceremony has these similarities.   First, gratitude is offered to the forest for fostering life. Second, three symbols are presented as an offering to Mykel, Being of Death. These symbols are meant to represent birth, death, and life and vary between tribe. For example, The Bolet offer a berry, seed, or cone, a piece of greenwood, and a piece of deadwood, each from the same tree. Third, some symbol is place on or around the dead to show how death creates new life. The Bolet use a species of glow in the dark lichen. Fourth, Mykel is petitioned to disperse the life energy of whomever has died back into the earth.

Abandoning a friend without a legitimate reason is one of the worst things you can do in mysum culture. This can include things like ending a friendship, failing to help a friend in need without sufficient reason not to, or betrayal.

In addition to the mysums, Mykel created the Great Mycelium, and in the colder months, while they are underground, mysums commune with it. This creature, of sorts, is an interconnected web of organic matter that stretches all across Kelunbar forest, perhaps even farther into unknown lands. It grows each year and collects the memories of the mysums and of The First Tree. The mysums learn of the Beings from it, and in exchange share their memories. The Mycelium has been growing closer and closer to the center of the world, and it has reached...something. Something beating. Something alive.

What you See is What you Get

With the exception of The Pupu, mysums don't believe in a soul that can be separate from the body. When your body dies, it is because your life-force has left it and dispersed back into the world.

As a whole other species have a respect for the mysums, if not a bit of fear due to a few more vicious tribes. Most members of the forest understand that death merely gives way to new life, but don't like this fact in the ways that mysums do. Mysums typically just keep to themselves, except for the more curious types.
Genetic Descendants
Origin/Ancestry
Mykel, Being of Death
Lifespan
15-20 years
Average Height
Depending on the tribe, a mysum's height ranges from one inch to two feet.

They probably didn't mean to hurt you.

The Bolets are reserved, easy-going, and curious.

Ekon travel in packs, appear in abundance, and may be a little too friendly at times.

The Musca value knowledge, history, and learning more than any other species in Kelunbar

Your question has an answer, if you are desperate enough.