Under Reconstruction     The Bumers were created by Abuno, the first creatures of consciousness in Kelunbar. The Being's touch poured awareness into the trees, flowers, and bushes of Kelunbar, and they began to speak like the Beings, and move around like the other creatures in the forest. They act as ambassadors now, translating what the woods say, and roaming the forest in search of ways to help it.

There are many shapes of Bumers, all from different sorts of plants. They do not allow these appearances to separate them, instead choosing to be united to all other Bumers, in the same way the parts of a forest are interconnected. All Bumers have some number of appendages, some used for walking and some as arms, but the number of appendages varies depending on what plant they are from. Trees typically have two legs and an unlimited number of arms. Flowers typically have two legs and two arms, though this varies.

Bumers reproduce like flowering plants and never by propagation. The can pollinate themselves, utilize pollinators, or engage in pollination with another Bumer if they are the same variety, or another variety if it happens to be compatible to cross pollination.

On some occasions, Bumers will choose to remove a piece of themselves and encourage it to grow. The resulting Bumer is a clone of the original and as long as both live they are connected to each other, hearing each other’s thoughts and feeling each other’s pain.
Bumers typically only choose to do this if they’ve been inflicted by an incurable disease or damaged in some way. Choosing to take a part of themself and “plant” it prevents them from dying, in a way.

Not every seed a Bumer drops becomes a new Bumer. Most actually grow into a simple plant. They believe that it is the touch of Abuno that creates a new Bumer. Every ten to fifteen years a seed dropped sprouts into a new Bumer come Birth season. This seedling spends the first three years appearing as a normal plant, growing roots, flowers, foliage, and other aspects of its variety. If it is a tree, its quick growth will give it away as a Bumer. If it is typically an annual flower, its longevity proves it to be such. When adults recognize a plant as being a young Bumer, it begins to speak with it frequently, telling it about the world and how it has been blessed by Abuno to live a long, mobile life where it will get to even speak with other creatures of the forest. Its fourth year a young Bumer spends entirely on growing eyes, a mouth, and appendages for movement, and in its fifth year it has access to its full capabilities and has already learned much about the world due to conversing with other plants or Bumers. It is considered an adult, though it lacks experience. They never quite stop growing, always changing shape and size, though their growth rate decreases significantly after their fifth year.

Bumers typically wander around a radius of a few miles that they consider their home, preferring to stay close to other Bumers they are familiar with. These sections of the forest are called groves, and are named after the species of tree most commonly found there, such as the Rowan Grove or the Salix Grove.

Bumers need water and sunlight, like all plants, and will pause and rest for about five hours every few weeks to absorb nutrients from the ground.

Like other flowering plants, Bumers have a cycle that goes throughout the year, typically flowering in the and Growth season, producing and dropping seeds during Death, losing their foliage during Rest, and regaining it during Birth. They don't have a need for sleep.

Bumers are primarily solo creatures, not having any settlements and typically choosing to travel nomadically, and they are rarely inclined to form bonding relationships in the way that The Mysums are. Bumers meet regularly at local groves to discuss the goings on of the forest. The Rooters are a separate organization that has its own hierarchy and structure, and many Bumers find it confusing or uninteresting.

Bumers have sight (in light and in dark), sound, and touch capability, but don't smell or taste things. They also have the capability of communicating with all plant life, something that is less of a language and more of an exchange of impressions, feelings, and intuition.

Bumers tend to be relaxed about who or what perches on their branches, as long as no harm comes to themselves. It's not unusual fora bird or a squirrel to alight on one temporarily, but due to the fact that Bumers move around, most creatures won't make a home on one. Insects, on the other hand, are quite bothersome and often pose the greatest threat to a Bumer's life. Certain Bumers, like plants, repel some species. Some have taken to swimming as a way to wash insects away. Some can pick insects off if they have appropriate appendages, and some will ask birds, squirrels, or other creatures to eat them.

Bumers typically have a male and female name they choose for themselves their first year as a mobile Bumer. Some use both at equal frequency, and others choose to use one more frequently than the other (Such as Tebinstot, who primarily used his male name.) Some will also use both at the same time.

Since signs of health present so visibly in Bumers, this is their primary concern. Wilting, spots, visible signs of bugs, yellowing, stunted growth, spindly growth, fungi, or loss of foliage are common issues. Any Bumer will go out of their way to hide or rid themselves of this. Signs of aging, such as knots or thick stems, are on the contrary. Bumers love these. Lichens and mosses are also considered beautiful, since it means the Bumer is healthy enough to provide life to something other than itself. Bumers will even go so far as to transplant these onto themselves.

It is said that Abuno, lonely and discontent, breathed sentience into plants before the fall of the Sequoia and the disappearance of the Beings. Once, Abuno befriended and talked with the Bumers, teaching them the ways of the forest, and even of worlds beyond this one. That knowledge has been lost now, and all the Bumers know is they are here, and the forest is theirs.

In the year 2123, The Rooters were founded by Tebinstot from the Rowan Grove, a Rowan Bumer. They alone have much interest in keeping a careful track of history, and even consider the stories from other species of Kelunbar.

The Rooters have created an oral tradition that includes information from other species of Kelunbar. In addition to this, all Bumers have some memories and history passed down to them genetically. This includes images of the time of the Sequoias, things that Abuno directly communicated with them, innate knowledge of how the forest works and is interconnected, and significant memories from their ancestors. Bumers have access to this knowledge from sprouting, on.

Bumers typically have a dislike of the Skee, as the Skee view Bumers like any other plant that they can use to their own ends. They have a distrust of the Sirens, as do all creatures of Kelunbar, and of a few of the Mysums. In general, they believe that all species have their place in the forest, and as long as no one is being cruel, or harming others, there is no reason for hostility. 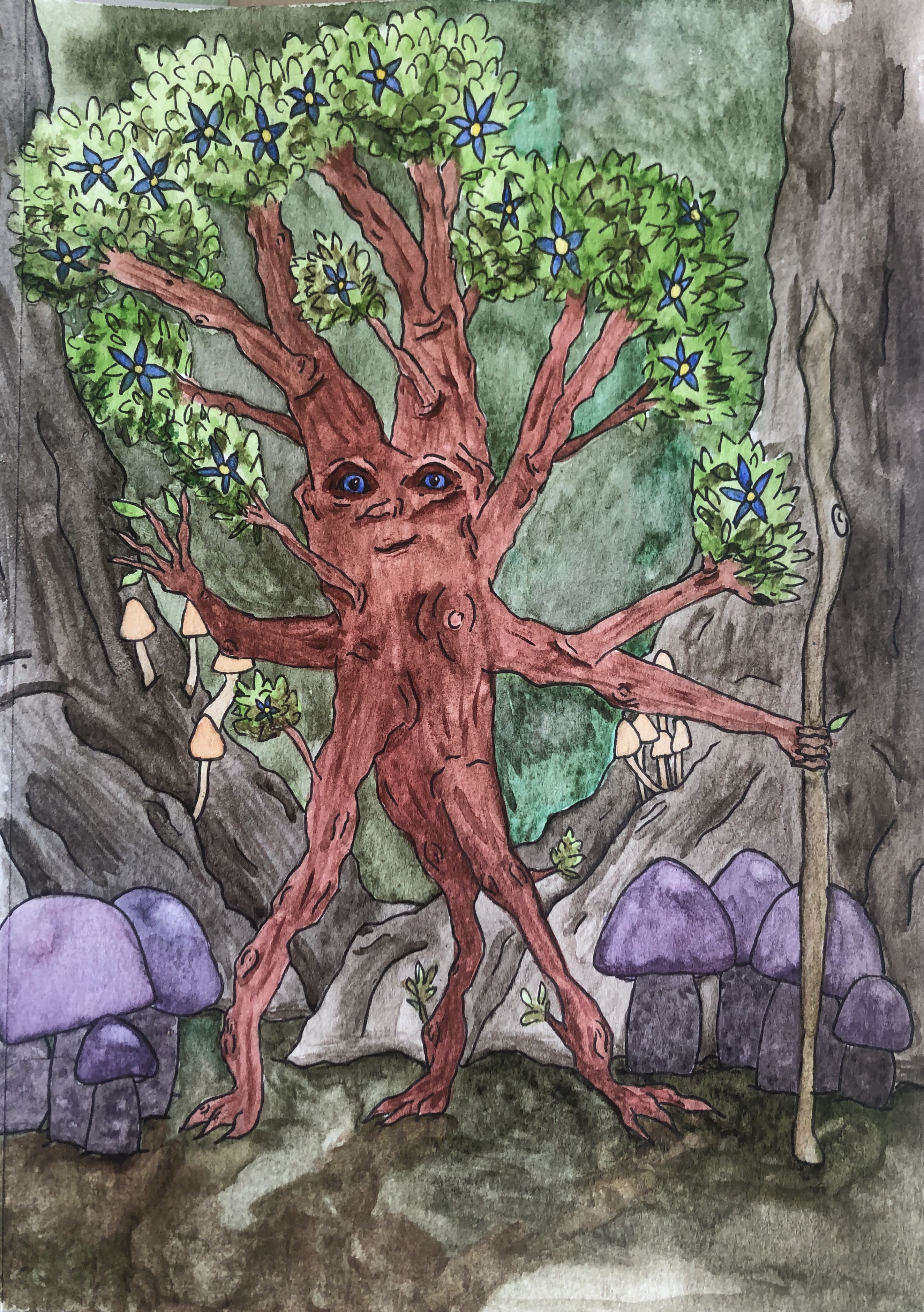 by Char Mulder
Origin/Ancestry
Abuno, Being of Life
Lifespan
150-200 years
Average Height
Flower type Bumers typically greatly exceed the height of their species because of their long lifespan, typically reaching about eight feet tall. Tree type Bumers generally are about the height of other tree their kind.

Remove these ads. Join the Worldbuilders Guild
The Bumers

Copyright Charlotte Mulder 2020. All rights reserved. All Uncredited images are from Unsplash or Pixabay.
Cover image: by Egor Vikhrev