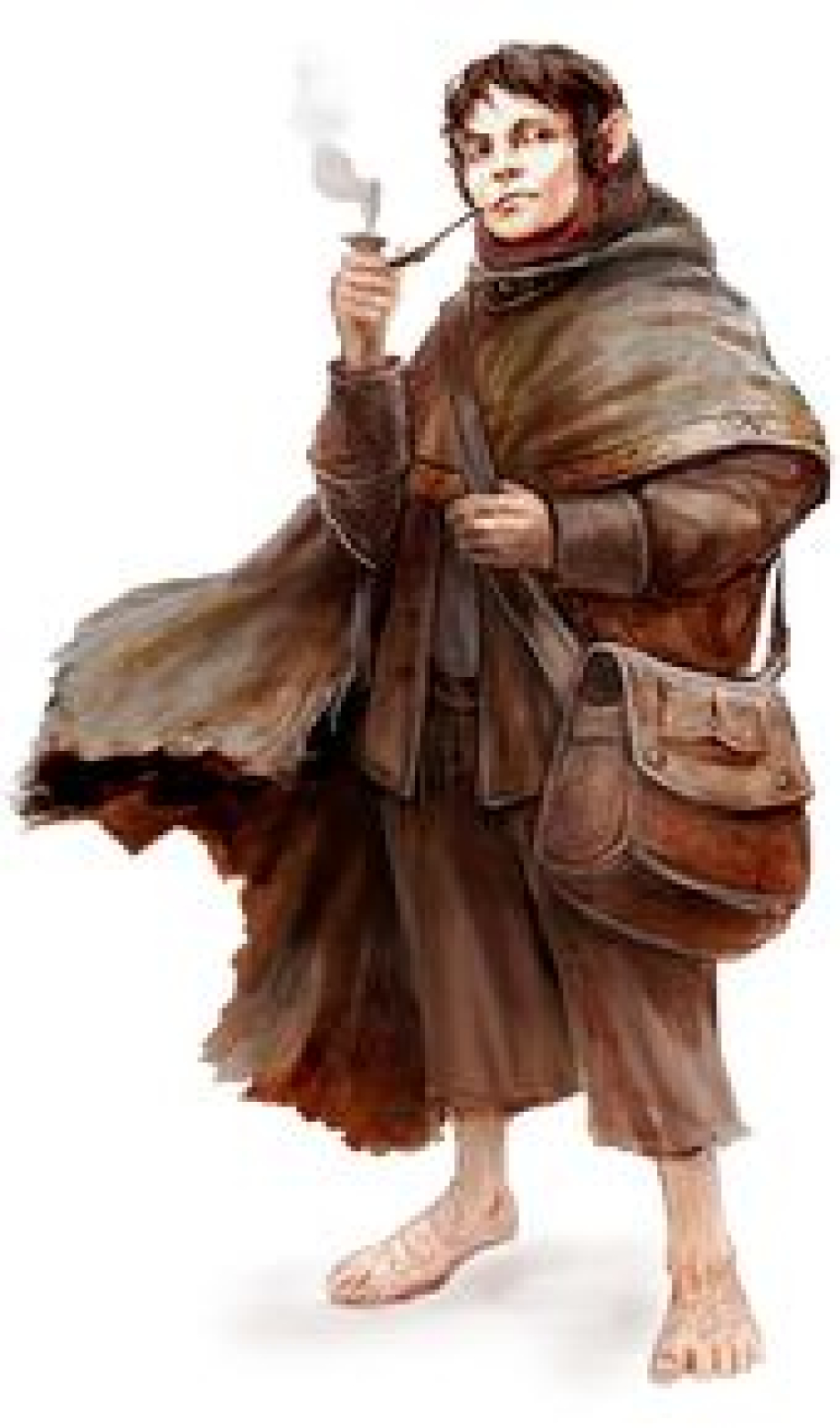 The comforts of home are the goals of almost all Halfling's lives: a place to settle in peace and quiet, far from marauding monsters and clashing armies; a blazing fire and a generous meal or three; fine drink and good conversation.


Though some Halflings live out their days in remote agricultural communities, others form nomadic bands that travel constantly, lured by the open road and the wide horizon to discover the wonders of new lands and peoples. But even these wanderers love peace, food, hearth, and home, though home might be a wagon/Caravan jostling along a dirt road or a raft floating downriver.

The Diminutive Halflings survive in a world full of larger creatures by avoiding notice or, barring that, avoiding offense. Standing under 4 feet tall, they appear relatively harmless and so have managed to survive for centuries in the shadow of Empires and on the edges of wars and political strife. They are inclined to be stout, weighing between 40 and 45 pounds (the love of food).   Halfling's skin ranges from tanned to pale with a ruddy cast, and their hair is usually brown, sandy brown or blonde and often wavy or curly. They have brown, green or hazel eye colouring. Halfling men often have long sideburns (muttonchops), but beards are very rare among the Lightfoot and Tallfellow, but the Stout bloodline quite often have them, moustaches on the other hand are even more rare, even among the Stout. All Halfling's like to wear simple, comfortable, and practical clothing, favouring earthy to bright colours.

Halfling practicality extends beyond their clothing. They are most concerned with basic needs and simple pleasures and have little use for ostentation. Even the wealthiest of Halflings keep their treasures locked away in a cellar rather than on display for all to see. They have a knack for finding the most straightforward solution to a problem, and have little patience for dithering.


Halflings are an affable and cheerful people. They cherish the bonds of family and friendship as well as the comforts of hearth and home, harbouring few dreams of gold and glory. Even adventurers among them usually venture into the world for reasons of community, friendship, wanderlust, or curiosity. They love discovering new things, even simple things, such as an exotic food (spices or herbs) or an unfamiliar style of clothing (Head-wear, turban's etc).Halflings are easily moved to pity and hate to see any living thing suffer. They are generous, happily sharing what they have even in lean times.


"They're so beautiful!, their faces, their music, their grace and all. It's like they stepped out of a wonderful dream. But there's no telling what's going on behind their smiling faces-surely more than they ever let on"   About Elves


Most Halflings live in small, peaceful communities with large farms growing crops and raising livestock and well-kept groves, orchards and vinyards. They rarely build Kingdoms of their own or even hold much land beyond their quiet shires. They typically don't recognize any sort of Halfling royalty, in Dwarven communities their are sometimes a few noble Houses/Families, otherwise they look to their family elders to guide them. Families preserve their traditional ways despite the rise and fall of Empires.
Many Halflings live among other races, where the Halfling's hard work and loyal outlook offer them abundant rewards and creature comforts. Some Halfling communities travel as a way of life, driving wagons and caravans or guiding boats and rafts from place to place and maintaining no permanent home


A Halfling has a given name, a family name, and possibly a nickname. Family names are often nicknames that stuck so tenaciously they have been passed down through the generations

When a 1 is rolled on a D20 for an Attack, Ability Check or Saving Throw, due to a Halfling’s luck trait you can REROLL the D20.

You have Advantage on Saving Throws against being Frightened.

You can move through the space of any creature that is of a size larger than yours.

When in Combat with larger Foes-Giants, Trolls, Dragons, etc you gain an Advantage on Attack Rolls.

"Humans are a lot like us, really. At least some of them are. Step out of the Castles and keeps, go talk to the farmers and herders and you'll find good, solid folk. Not that there's anything wrong with the Barons and Soldiers-you have to admire their conviction. And by protecting their own lands, they protect us as well."

Halfling's live in small communities, secluded or near another Good aligned race, Traveling the world in Wagons/Caravans or aboard boats and Rafts or among the Settlements, Strongholds or Cities of other races, all depending on the subrace of Halfling.

Omnivore: Halflings love good food and drink (especially meads and ales) and probably would eat themselves to death if they could. On average a Halfling would normally eat at least six meals a day.

In their older years, many halflings proudly show off their rotund bellies, after many years of eating, you rarely see a skinny Halfling (unless they are very sick). Due to their many years of excessive eating of good food and drink, a common condition among many is gout (swelling in the joints, mainly ankles and feet).

Halflings have roundish faces, often chubby cheeked ranging from pale with a ruddy cast to an earthy or tanned skin tone, with eyes of Brown, Green or Hazel.

Harnish, Kelldorian (Common) or Amorian (Northern Common), and one Human language from birthplace.

Almost all Halflings are polite, and will say hello or stop and chat with whomever they meet within their community.

Simple, comfortable, and practical clothing made of wool, they tend to favour more earthy or bright colours. 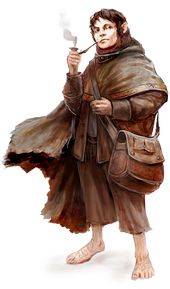 Blend into the Crowd


Halflings are adept at fitting into a community of Humans, Dwarves, Gnomes, Elves, or even Cyclopean, making themselves valuable and welcome. The combination of their inherent stealth and their unassuming nature helps Halflings to avoid unwanted attention.
Halflings work readily with others, and they are loyal to their friends, whether Halfling or otherwise. They can display remarkable ferocity when their friends, families, or Communities are threatened. 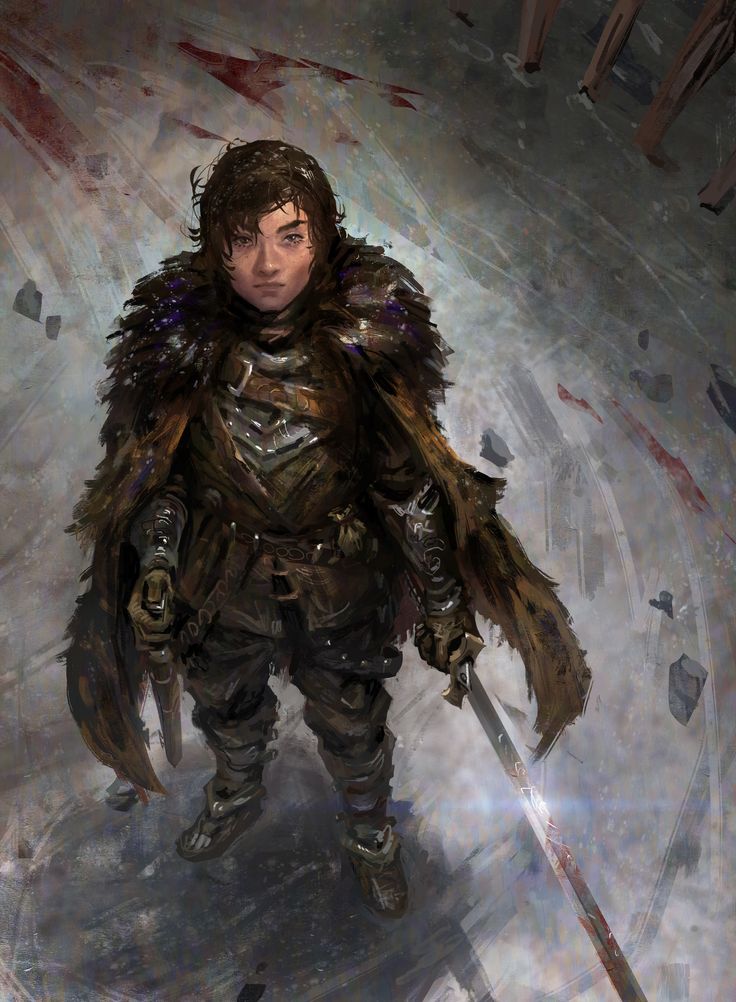 "Dwarves make loyal friends,and you can count on them to keep their word.But would it hurt them to smile once in a while."

Halflings usually set out on the adventurer's path to defend their communities, support their friends, or explore a wide and wonder-filled world. For them, adventuring is less a career than an opportunity or sometimes a necessity. 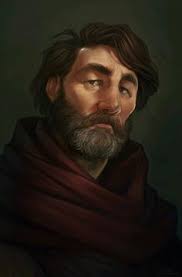 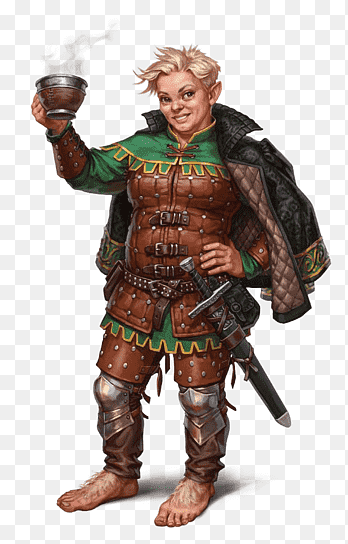 When a 1 is rolled on a D20 for an Attack,Ability Check or Saving Throw,due to a Halfling’s luck trait you can REROLL the D20.

You have ADVANTAGE on SAVING THROWS against being frightened.

You can move through the space of any creature that is of a size larger than yours.

When in COMBAT with larger Foes;GIANTS,TROLLS,DRAGONS,etc you gain an ADVANTAGE on ATTACK ROLLS.