Once nothing more than a lost child of the coldest winter on record in the Northern Outposts, she now spends her days by the roaring fire in the study of the Ylmaris Citadel, her favorite foods on hand if she so desires. Her white hair, once the pure and beautiful color of the fresh fallen snow is now tinged with grey, a mark of her age and a lifetime of experiences. Alaric rarely leaves her side, knowing her time grows short and she will leave him for the side of the Huntress, where she can join in on hunts again, no longer left at home due to striking pain.   Ylmari the White, even in her last days, is regal, head held high as her movements slow and those around her recount her triumphs throughout her life. During her years, she served as friend and mentor, protector and confident. She had seen great battle and even greater loss, but her love and loyalty to Alaric Ylyndar were unmatched, even when caught in the darkest days of war. As her days draw to a close, her likeness is scribed into the Yllvalion Codex, a piece of history that shall never be lost from the records of the Ylyndar Clan.   From an abandoned pup, lost in the frozen stretches on the edge of the Neither Tundra, to the friend of the leader of the Knights of Yggdrasil, to eventually a decorated soldier of the Elven Kingdom, Ylmari was more than just a dire wolf that roamed the wastes of between the Elven Forest and the Neither Tundra. She was a beloved friend, one that well-deserved her place in history. 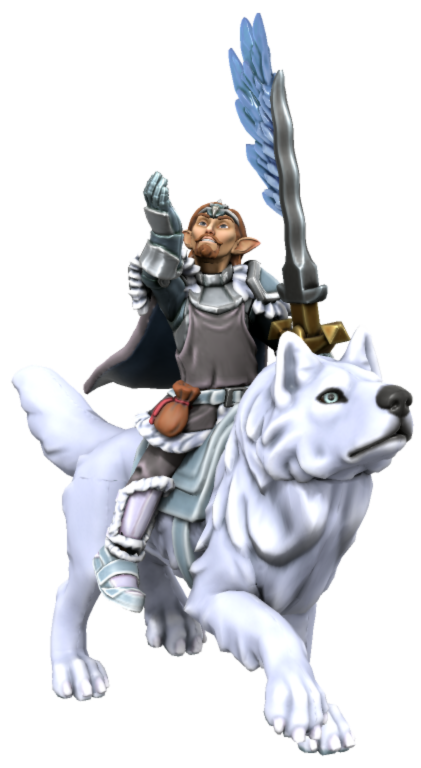 Alaric Ylyndar & Ylmari by Model via Heroforge, created by RiverFang
Ylmari was born during the harsh winter of 3505 I.M., one of the harshest winters on record for the Northern Outposts. With those of the Knights of Yggdrasil and the outlying villages tucked away in the Ylmaris Citadel for the winter and the heavy snowfall, little remained for the predators of the area to survive on. Many moved elsewhere, but few remained, with young being kept in the few hidden caves outside of Yllvalion.   Abandoned by her mother as it was assumed that she was the runt, Ylmari was rescued during one of Alaric’s many missions to ensure that the people of the Northern Outposts had found safety during the frigid winter. Against his father’s will, Alaric took in the small pup and decided to raise her, christening her Ylmari, after his home, the Ylmaris Citadel.   As Alaric trained and eventually became a Paladin and the leader of his clan and the Knights of Yggdrasil, Ylmari was constantly at his side, becoming a common site throughout the city as the two trained in mounted and various other forms of combat. While many others in the order rode Aelinor Elk or other hardy pack animals, the form of a bounding white Dire Wolf was often at the front, with Alaric seated upon her back.   Their role at the front of the Order became more prevalent as the battles of the Giant Wars became longer and more bloody. Stories and songs tell of her pristine fur matted with blood and gore and her and Alaric rode into battle against the Giants. Many times, it was noted that her loyalty to her master saved the young Yylyndar from an early death.   It is the final battle against the Giant prince Krojak that brought fame to both Alaric and Ylmari. Armed with Stormrender, a sword enchanted by the Elven King, the two rode into battle against the vicious Krojak. The battle was grueling, but when a chance arose, Ylmari leapt at the Giant sinking her teeth into his forearm. As the Giant howled in pain and attempted to shake the wolf off of himself, Alaric attacked, Stormrender alight with ice crystals and the power of the Fey Knights. With a single empowered strike, the Giant prince was struck down.

After the Giant Wars, Alaric and Ylmari were commended for their bravery and their work in putting an end to the Giant prince. Prior to this, no animals had ever received a commendation from the Elven King.   Ylmari received medals from the Elven King for Service to the Kingdom, Bravery, Courage in Battle, War Service, and Gallantry. For special occasions, these medals and ribbons were displayed on a silk sash that she wore, much like a collar.   Her greatest honor did not come from the medals and ribbons granted by the King, nor the stories and songs Bards told about her through the Elven Kingdom. A Fairy had been sent in congratulations on behalf of the Fairy King Festival Snix. Upon meeting Ylmari, the Fairy chose to grant her a name, Ylmari the White, a title that held the unknowing magic of the Fey.
Ylyndar Clan
In response to the prompt Tell us about a famous animal in your world - how did they get to be so famous?