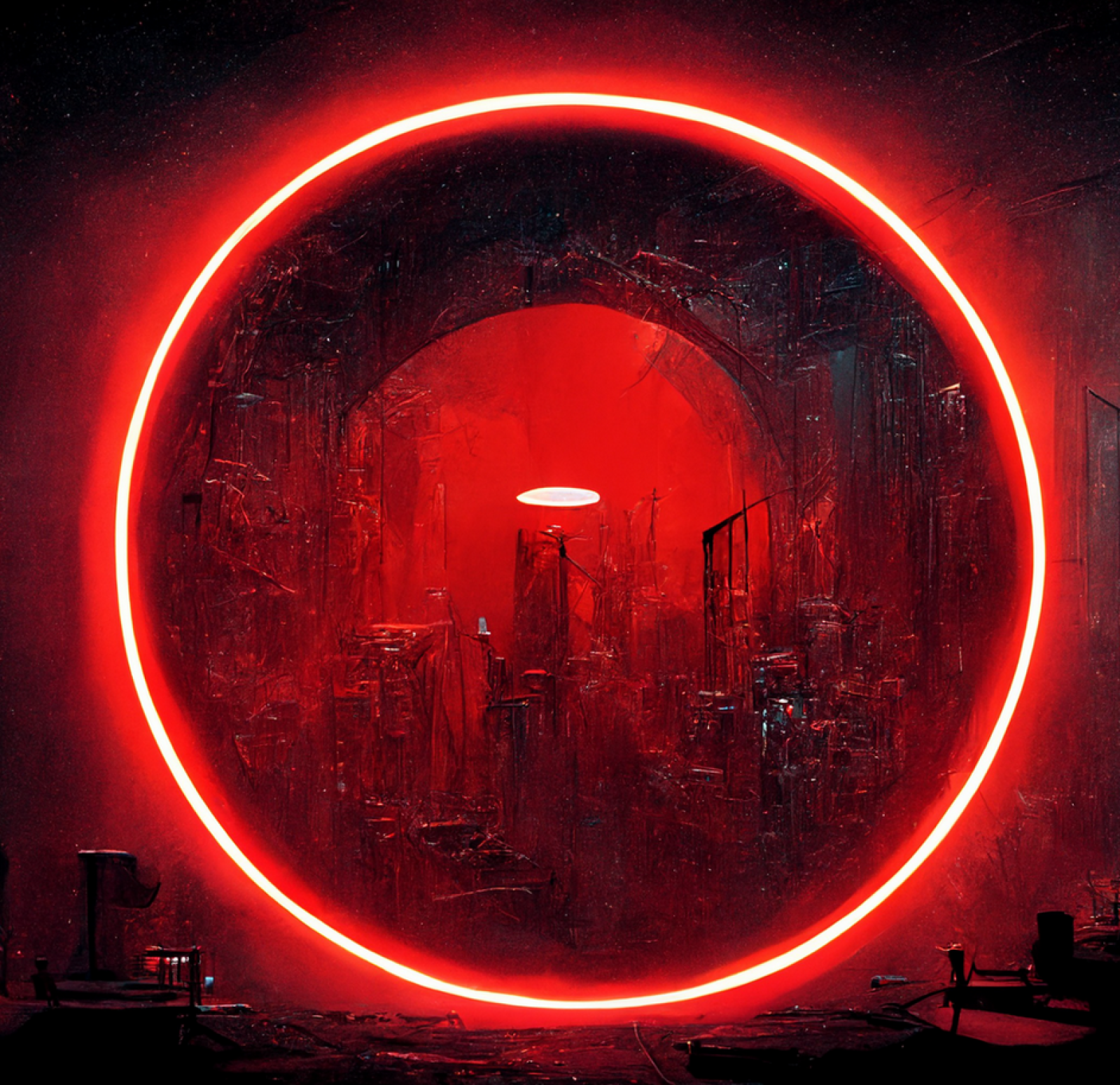 The gate to Hell

There are some you don't want to cross

With a seemingly infinite number of different dimensions, every imaginable world should be accessible to the I.D.E.A. This take does not reflect reality, as almost all dimensions are somewhat similar to Terra, a telluric planet with a breathable atmosphere and, when there is sentient life, it is often humanoid. Then, there is Hell, and the forbidden gate that leads to it.

Initial readings of the dimension were odd and displayed corrupted data. The probes sent did come back, but they were scorched and half of them suffered malfunctions. Again, no exploitable data were retrieved, except for the obvious fact that the dimension was burning hot. Since the probes that were physically weaker than explorers came back in one piece, it has been decided to send the expert of flames Koria Setin. Even among fiery alcyers, she had an unusually high resistance to heat, and seemed perfect for the task. When she entered the gateway, the portal light turned deep red and heat started to pervade through the gate.

Nobody know what Koria lived during the 11 minutes she spent in there. She won't tell. The only thing she agreed to say to justify her emaciated and famished tone is that it has been to her 16 months. And that it was traumatizing. She was no pushover and was unphased after the disastrous exploration of Sigmal VII, but the dimension formerly known as Tiri III was renamed after the first word she said when she came back: "Hell".

After the return of Koria and under her insistance, it was decided to stop further exploration of the dimension and shut down the gate. But when they tried to close it, the commands did not respond. The abormally red gateway was still active, despite the positive feedback of the instruments telling that the portal was off. Even powering off the gate and the whole aisle did not help, the passage remained desperately open. As if it was no longer the I.D.E.A. who kept it active. 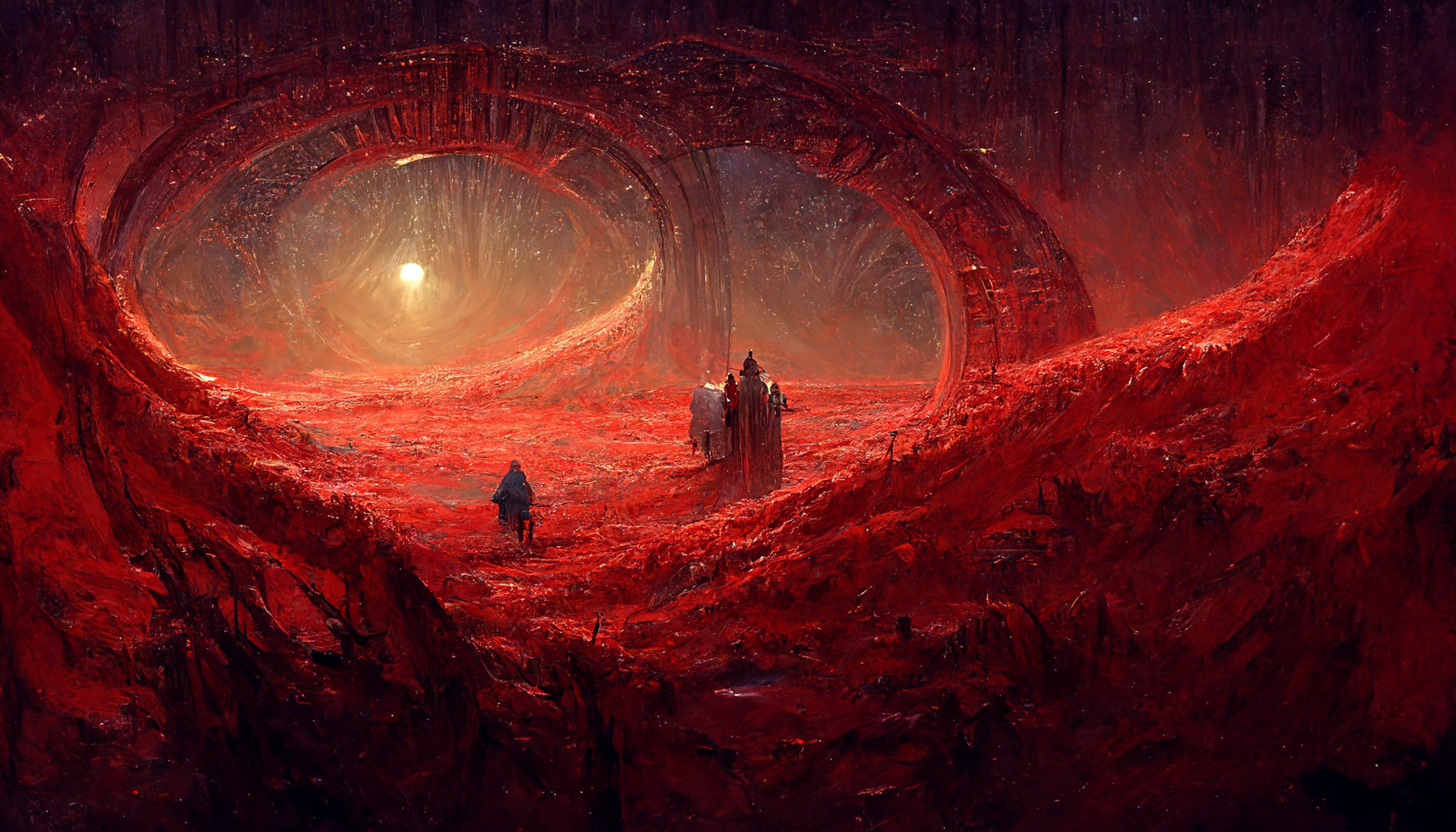 Artistic view of Hell by Rumengol via Midjourney

With the gate active, Koria thought it was her duty to guard the room, making sure nothing or nobody gets out. The heat coming out of the portal rose ever so slightly with the years, to the point the steel walls showed signs of stress and the equipment started to melt down. The explorer stayed in front of the portal for the rest of her life, staring deeply into the gateway, directly into Hell. The aisle was declared off-limits except for the personel who brought her food. Eventually, security cameras stopped working and Koria was truly alone in front of the gate.

One day, she vanished. The explorer did not leave the room for the cameras outside still worked, but no trace of her remains. The only explanation is that she went back through the gate. Or worse, that something pulled her in. In the panic sparked from the news, the gate was sent to the already doomed Decemer IV. Never before had an active portal been transported through another one, and the consequences were unknown, but the one who took the decision thought it was worth the risk.

As exepected, things went wrong. When the two gateway came into contact, a violent burst of energy surged from both, killing the four operators present in the room. The cursed gate made it to the other side with the same effect but no victims this time, at the cost of both regular gates and extremely expensive equipment. With the utmost care it was displaced on an isolated hill of an outbound dimension.

For obvious reasons, further gateways to Hell were forbidden, and the coordinates were hardcoded in every portal software to trigger a fatal error. The only way into the mysterious and dreaded dimension lays alone, slowly heating the atmosphere of Decemer IV.

Answering: "an artifact that embodies a hideous or monstrous idea"
Visit Rumengol's Competition Page Check all other answers to this prompt Competition Homepage

The gate to hell is my hometown