The Dawn Of Time

The truth is, however, is very ancient. Before the gods we know as gods walked the earth, there were cosmic beings known as the progenitor gods. These beings existed in wonderously vast and mystically nebulous cloud. They took in great power from the cloud until there was no cloud left. Having contemplated creation, each one decided that now was the time to do more than contemplate. As there was no more cloud, they decided to do this together.   In a dance that was ages long yet a mere blink in their eyes, they came together several groups. As they formed their groups, the heavens and the world came to be. This was a complicated merging of creative powers and ideals. As it is with all things, there is always one who refuses to get along. This one refused to create. Instead, It wanted to grow more power even though there was nothing left of the great cloud. It, too, had a plan.   Refusing to join any of the groups, It formed itself into the tiniest of moons. And waited. Each group wove themselves together into moons, planets and the sun. As the weaving slowed and settled into the full forms of their new creations, It drifted towards the back where the groups who wanted to be away from the sun had aligned themselves. At number eleven, It moved into orbit. This was a weaving of only a few progenitors who all shared a wonder for icy beauty.

It had a theory on how to get more power and this one, the farthest from the beaming sight of Sun, seemed the most logical place to test that theory. The orbit of It-Moon began to draw closer and closer to the ice world until It fell onto the surface in a great crash. The force of It's impact cracked loose bits of the world. The weave of creation held and the peices that were flung into the heavens were a woven mix of the progenitors.   It ate a piece. The piece held far less power than anything that size It had eaten normally held. The weave of creation was power. Weak. A trickle of what had been used to make it but still power. It was pleased. Again and again It smashed into the ice world breaking it until there was nothing but a great ring of stone and chunks of ice, each containing its slight share of the weave. They were the remains of progenitors woven to never beable to feed and grow again. They were as close to dead as a progenitor could be.   It wanted to taste a new weave. The feasting on the same weave certainly brought power but ... It just had to test to see what more the other weaves held. Curling up into a bigger tiny moon, it drifted throguh the other worlds, pondering which one to taste next. As another age passed, It decided on the world between the big gas weave and the red weave. As It had with the ice world, It crashed into this world again and again until there was nothing but bits in a ring. The taste of this new richer weave pleased It.   It fed for an age before It grew tired of that weave flavor. But, this time, there was no searching the other worlds trying to decide. It had already chosen. The third world from Sun. 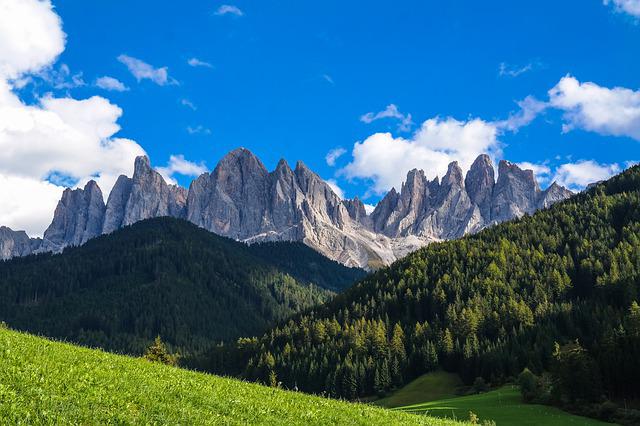 The Dolomites are a range of mountains in northeastern Italy. It is a series of 18 peaks that are shear rock that look like teeth or spines.   They can look pink in sunlight and, on occassion, red. In winter, they often have a blanket of snow that melts off every spring as the rock warms enough to melt it away.   Science surmises that the Dolomite were once a coral reef in the Tethys Sea some 260 million years ago. Due to the movement of tectonic plates and seduction, the Dolomites were pressed up as mountain peaks. 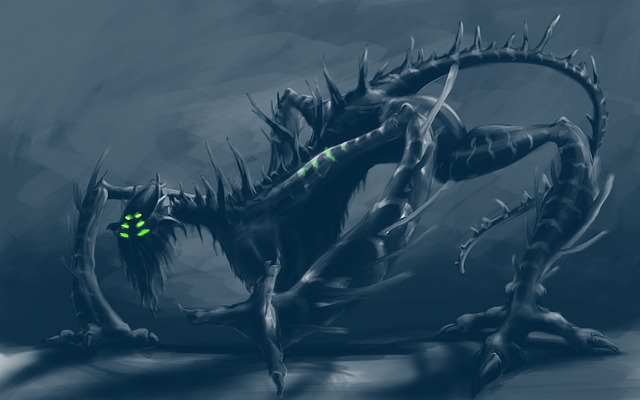 by V_M
It came to Earth dreaming of Doom. This weave was so different, just nearing it felt strange. The weave could breathe. Things spawned all about.   It crashed, gleeful at the doom that befell the spawnings. It also felt ... puzzled. The pieces of Its crash did not leave but fell back down. The weave was holding, of course, but the weave was ... changing.   Parts of it loosened to form a new weave. Far, far smaller than the weave of the whole but ... of a size to match It. This spawn weave attacked, pulling the power of eaten weaves out of It.   It fought back, smiting with Doom. But ... Doom failed It. Down and down the spawn weave dragged It. The world weave unraveled It then joined It to the weave. Only the spined tip of Its tail remained, forever a trophy of the weave.