Zone 4 is the second to last Zone within the city of Birdencaster [Image in the Sidebar]. Zone 4 is known as the Market Zone, the majority of which are in the street markets and sell grocery items. Food and drink items are sold at stalls and not at Stores, the exception to this is bread. Stores are on multiple floors. The more successful store will have solar panels on its rooftops [1]. Stores that are unable to have solar panels will instead have beehives.

The residents have fancier apartments than in Zone 3, typically they will have garden grounds outside them, bees enjoy going to this zone for its gardens. The bees are there for honey production. Outside these apartments, most citizens will find it is common to find a market on their doorstep while living in this Zone.

Visitors to this Zone will be visiting to shop for items. The main street market runs along an old two-lane road that is no longer used for traffic. Along the road are the street markets, at various points along with the road level crossing style gates so that emergency services can get through the market to either Zone 3 or Zone 5. These gaps where the gates are, there are, no markets so that there are no issues passing through.   There are streets that go off into different directions that might terminate in courtyards which may hold stalls or play areas with picnic tables. This makes Zone 4 an excellent place for families.

As said above Zone 4 is the Market Zone with its street markets for grocery items. What is notable is what is fresh and what is canned. Birdencaster has a well-established Animal Husbandry industry, in products of meat from the animals. This not canned for the local citizens but is when transported to other cities. Canning is to preserve the freshness of the product. This is true the other way as the city has no fertile land to grow crops their importation of fruit and vegetables is canned so if someone wanted sweetcorn, what will be available are cans of sweetcorn only.   The Canning Plant found in Zone 3, cans the meat as well as making cans that are empty that can be exported to another city to be filled with their food items.   Another product that has changed with the passage of time is Milk. The milk will be processed into evaporated and condensed versions. Ordinary milk is powered for exportation to other cities. Within the city themselves, they can buy fresh milk, but since households have a limited supply of electricity, 2 hours per day for residential areas [1a] they often buy what they need on a daily basis instead of having a stock within their homes.   Drinks have also changed to reduce the need for plastic, drinks are now powered regardless if they are being exported. When a drink is wanted a powder sachet is added to water to make the drink required.   One particular store that is a successful business in Zone 4 is the confectioners, found in Segment 8. This is because of the need to cheer people up. Confectionery differs from the sweets of the Old World, as the importation of ingredients has changed. This is due to the decreased reliability of imports from the oceans. Ingredients such as chocolate and coconuts are not imported as they can be a target for pirates. Sugar is grown logically in the form of sugar beet so the sugar doesn’t need to be imported from other countries, but is imported from other cities. As a result, any confection that relies on these ingredients are no longer made and are a thing of history. A table of known and made confections is below.

Zone 4 has Segmented trade, which means each segment sells particular items. Again this is not a hard and fast rule as Segment 8 has a homeware store as well as a traditional sweet shop. All segments that have bakeries produce bread rolls for general purposes and for the The Great Day of Celebration.The Bread type changes with each week for The Great Day of Celebration, so one week it may be plain brown bread, while another it may be wholemeal, the next week raisin and so on. 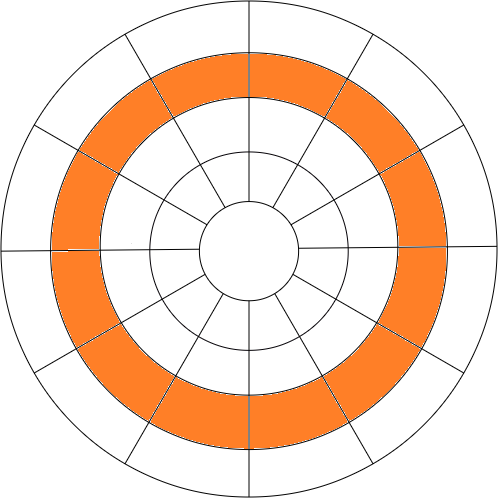